SHIELD? On my TV? Surely you jest. 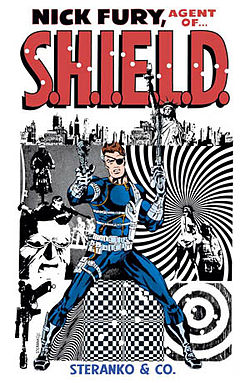 I’m about a week late on this one, so I wouldn’t exactly call it “breaking news” anymore, but by now you’ve probably heard that ABC has green-lighted a pilot for a series set in The Avengers film universe, about the day-to-day operations of SHIELD.  And I’ve got say I’m a bit torn…

There are three forces at work here that make me nervous about this latest development in the Marvel Universe (more so than Guardians of the Galaxy, honestly).  They are, in no particular order:

We’ll start with the Superhero TV Show Effect.  This is the simple fact that superhero TV shows tend to… well… suck.  Or at least, that supers tend not to translate to the small screen very well.

There was a golden age of superhero television, from 1965 to 1979.  Batman, Wonder Woman, The Incredible Hulk, even the Six Million Dollar Man. Yeah, those classic shows are campy as all get-out, but they were well-received, widely-viewed, and in some cases, pretty much shaped the perception of superheroes in the general public, while beaming them into the home every week (though in the case of Batman, it pretty much fuckered up the popular imagination of an icon. For a taste of this lasting damage, look no further than the post-Keaton, pre-Nolan Batman films…).

More recently, we’ve had entries like Smallville, The Cape, No Ordinary Family, and Heroes.  I’d call Smallville a fluke for its relative success.  I mean, it was pretty much indistinguishable from other WB fare (seriously, one time I thought I was watching Smallville for like ten minutes.  It was actually Felicity.  No joke).  The Cape was actually pretty good—and the closest we’ve had to a real, four-color comic book vibe translated on to the TV in… well, forever.  Unfortunately, no one else seemed to agree that it was as good as I thought it was (except for Abed.  Six seasons and a movie!)  As for the other two, there is no point in extolling their virtues, for they are few.  Suffice it to say, one stars the Commish and the other was a huge disappointment.  I’ll let you work out which is which.  Needless to say, neither moved the needle very much.

I know what you’re thinking. You’re thinking to yourself, “You ignorant, puss-swilling idiot, SHIELD isn’t about supers!  It’s about secret agents!  Secret agent shows almost always work! After shows about lawyers, secret agents are, like, the next most surefire thing you can put on TV.  I hope you die in a fire!”  You would be correct in your assessment.  But I hope you know that words can hurt.  Sticks and stones and all that.

Yes, SHIELD is apparently about secret agents.  So it’s got that going for it.  But it is set squarely in the Marvel Universe, so we know that supers and aliens and magic and Viking space gods are all fair game.   All I’m saying is that I’m a little nervous about the prospect of seeing this realized on the small screen—that maybe just knowing it exists will diminish my enjoyment of movies I love (hell, the Star Wars prequels and the Matrix sequels are excellent examples of that).  I mean, the most amazing thing about the first sequence of the Marvel films is how consistently good they are.  There are basically no missteps—5 perfect films.  I can’t imagine an hour long, weekly sci-fi/thriller is going to be able to live up to that legacy in a meaningful way.  But I really hope I’m wrong.

So next up is the Whedon Effect.  This is the simple, unarguable, and incontrovertible fact that half of everything Joss Whedon makes sucks…

Hey, now!  Put the torches out!  Put the pitchforks down!  Lets talk this out!  What I meant to say is, “There is a large body of Joss Whedon’s work that I have not personally enjoyed, but that is well received by critics and fans, who are totally entitled to their opinions!”

I’ll level—Buffy (and by extension, Angel) sailed by me.  I should’ve liked them.  The themes are right in my happy place.  Buffy had a nubile young Alison Hannigan being all witchy and gay (also square in my happy place).  Hell, I even had more time than ever to actually enjoy TV when it was airing.  But Buffy had two strikes against it out of the gate: firstly, Kristy Swanson will always be the Buffy in my heart; and secondly, the early episodes (and the later episodes as well, I understand) suffered from what would later be called (by me), “The Dawson Effect”—the teenage characters prattling off dialog better suited to some Ryan Gosling rom-dram, or always having a Peter Parker-perfect quip.  This stuff looks good on a page, but on screen it kills me (Looking at you, Chasing Amy.  Sorry Kev). Consequently, the stuff that really put Whedon on the map didn’t spark me, which has always dimmed my perception of his later works—quite unfairly, I admit.

That said, I loved Firefly and Serenity (even if I was a post-cancelation convert) and The Avengers was the best movie of the year (Sorry TDKR, you were number two, except on Mondays, Wednesdays, and Fridays—then you’re my number one).  So really, the Whedon Effect is a bit of a wash.  He’s definitely come a long way since Buffy, but it’s hard to say which way a Whedon-conceptualized SHIELD might shape up.  After The Avengers, I remain cautiously optimistic in that regard.

That brings us to the final issue with a SHIELD television series.  That is the Nick Fury conundrum.  Or the fact that Nick Fury won’t be in the fucking thing.  I mean, this is the movie universe, so Sam Jackson is General Nick Fury, and I’m thinking that he won’t be making many (or any) appearances.  And that bugs me.  I mean, Nick Fury has been rocking missions for SHIELD since Nick Fury, Agent of SHIELD, Marvel’s early foray into psychedelia (not to discount Fury’s prior service to his country, fighting the Germans during the Big One).  His absence will be felt.  And with the passing of Fury’s surrogate and SHIELD’s greatest asset, Agent Phil Coulson, who could possibly offer the continuity between the films and the show? Clark Gregg fucking killed it on The West Wing.  Whedon should’ve kept Coulson alive just for that reason.  Cobie Smulders is a top choice, and with HIMYM seemingly winding to a close, who knows how her availability will change?  Nevertheless, a SHIELD show without so much as a Hasslehoff Fury will have a real hard time keeping my interest…

So lets recap.  Superhero shows are bad (but this is a spy show, Whedon’s TV shows are dubious, and there is no Nick Fury.  I’ve got to confess… I am not too optimistic about what this portends for SHIELD.  That said, I’m a sucker for just about anything Marvel drops these days, so I’m sure I’ll tune in, if grudgingly.  In 2014.

2 thoughts on “SHIELD? On my TV? Surely you jest.”