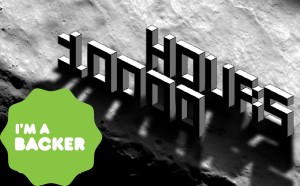 Last week in ‘I’m a backer,’ we discussed the excellent (and nostalgic) project Underground Kingdom. It finished strong, beating it’s funding goal with a surge in the final 48 hours that put it over the top. That makes two weeks in a row where we have discussed projects about games, of one sort or another. Though you’ll also likely get at least one game out this weeks project, that isn’t the point of it really. This week it is my privilege to present to you one of the more interesting and off beat projects it has been my pleasure to back, 10,000 Hours.

This project takes its insperation from Malcom Gladwell’s Outliers: The Story of Success, in which, per Wikipedia, “Gladwell repeatedly mentions the “10,000-Hour Rule”, claiming that the key to success in any field is, to a large extent, a matter of practicing a specific task for a total of around 10,000 hours.” Essentially 10,000 Hours is about achieving the dream of its participants – making video games – with an interesting twist: they are willing to let the rest of us take a peak behind the curtain, and support them in the process. For someone who is interested in both creative projects and the creative process, this is a pretty easy sell for me.. If any of you are as intrigued as I am though, by all means, read on.

By now I am sure this is starting to sound pretty complicated, but it really isn’t. According to the project creators, for $10 you will get “1,000 hours of everything we create.” This includes, Access to our alphas and betas, Screenshots, Wallpapers, Blog entries, A single-run art print of something we made from the last 1000 hours, and any finished game or games they create in those 1,000 hours. Oh, at you can buy 1,000 hours at a time all the way up to the full 10,000 hour period. The projects pitch says that they expect the whole thing to take about 5 years, so each $10 investment should cover roughly 6 months of updates and professional voyeurism. They even made a flow chart to help:

But I’m not investing in this project because I MIGHT get a game out of it, and I doubt that any of you will either. As the authors say, “This project is not going to fund those games, but to fund the documentation of our journey into game development.” In other words, they have no plans to quit their day jobs as they make all this effort, they just want this project to fund the time and effort that it will take to share the journey with the rest of us. This means communication and participation, for everyone involved; it means the opportunity to be critic, cheerleader, and armchair designer all in one.

I think this project, despite its unusual goal, does a lot of things right. It’s pitch is very professional, and it explains its complex idea with clear words and an abundance of visual aides. It also has a great video telling me who these people are and what they want to do; some people appreciate silly or clever intro movies, but I prefer to hear the unvarnished version. The credentials of both parties seem correct, and though their idea is certainly offbeat it is very achievable; it is partially because they promise so little that I believe them and want to give them my money really. Even the reward structure I can find no fault with. The rewards are put in a logical and escalating order without tricks or gimmicks.

I don’t find the pitch to be faultless though, I have two small gripes with the project execution. First, I don’t think that telling people that you will execute the plan with or without their help is particularly conducive to getting funded. Second, if they were going to do the project regardless – why not set the goal at a dollar? The unspoken gripe between these points is that though $5,000 looks to be a very achievable goal in this case, there is no reason given as to why that is or should be the number. Given that the amount breaks down into 500 people watching the project for 1,000 hours or 50 people watching for the full 10,000 hours I think it is likely that the blogs and videos simply aren’t worth the effort below a certain audience size, but still I think that the issue could be better handled/explained.

After taking the time to write this review, I had a chance to ask both of the creators a couple of questions about this wonderful project:

So, what are you doing to get the word out about this ambitious project as you close on the finish line?

A couple of things. Since the beginning of the Kickstarter, we’ve been way more active on Twitter than ever before. We’ve spent a bunch of time looking for the journalists and devs that write about projects like ours, and we’re trying to start conversations with all of them. At around the two-weeks-left mark, we’re going to put out a press release and target some of the smaller indie media outlets, just hoping to get some coverage. Pieces like this are exactly what we’re hoping for!

Our original plan was to shoot for 10,000 dollars, largely because we liked the idea of getting funded for a dollar an hour. As we looked at similar projects and what was actually getting funded, we dropped it to half that price. The $5,000 level means that we’re getting ‘paid’ for an hour of blogging a week, at a decent wage. It’s a pretty random number, but we think it’s entirely achievable and it gives us extra drive to continue adding content to the site and Kickstarter. If we get funded, we’re going to have some pretty significant incentive to make the project’s blog and interaction elements as fun and professional as possible.

I’m actually shocked that we never thought about setting our goal at a dollar, that would have been a fascinating experiment! I think a big piece of the fun of Kickstarter is the push to cross the finish line, but it would have been interesting to see how far we could have gone if that motivator wasn’t there.

From your bio it sounds like life was going pretty well until now, why the radical change?

Making video games was actually our goal from the outset! We started on our SAP training side project because once we got it up and running it would be a steady source of revenue. Now that it’s live and we only have to add content weekly, we finally get to start on the original goal!
The actual “radical change” is opening the indie games side of our company up to the public. Once we brainstormed the idea for the Kickstarter, we got really excited about the prospect of almost open-sourcing our creative process. Making games and working with our players directly sounds a lot more fun than just getting feedback on release, and it’ll be a great motivator for us.

What would you say are your creative influences – games or otherwise? What is it that will shape your vision?

I have always loved a good story and I suspect much of what has shaped me as a gamer comes from my days of tabletop gaming with friends.

I’m a big fan of a million different things, and defining them all would be impossible. In gaming, I’m madly in love with games like Cave Story, Braid, Super Metroid, and anything that takes 20 minutes to play but hooks you with an incredible concept. In art, I love anything from Rothko’s color fields to Paul Robertson’s perverted pixel art animations. In games that I help make, I want you to come for the fun, but stay for the deeper elements, like story and art and concept. Fun needs to always come first though, that’s what makes video games such an interesting medium. I’m also an avid European board gamer, and if we ever get the chance to emulate the fun of being around a table with close friends, but in a video game? I’ll feel incredibly proud.

I think “Deceit” is a great project to start off with, but after you get up to speed, what kind of games do you want to make?

We have many games that we want to tackle, from a top-down RPG to a more casual game that uses user-generated rhythms to control the main character.

I really want to make excellent Metroidvania games. I play things like Cave Story and Shadow Complex, and I really love how well-defined their game worlds feel. There’s a hole in the indie game scene, and I want to fill it. I’m also pretty excited to explore some of our other concepts and play around with control schemes. I’d love to make some short casual puzzle games that people can just pull up on their phone and enjoy for five minutes! After Deceit, it’s pretty open-ended. While we’re just two people we’ll probably stick with 2D games, but that doesn’t mean that we have to stick with one genre.

We think one of the biggest pitfalls that new indie devs fall into is shooting too high too soon, so we’re going to start small and scale up as we learn and grow. That’s a big piece of the project, and we hope that getting an inside view of our growth will be as interesting to watch as it will be for us to experience!