Distorted and ugly. Is the fomorian giant a hideous mystical creature, or just some “poor” mutant out to rob and maim? Let’s have a look…

One of the older Bones miniatures, the fomorian giant still looks nice today, if “nice” is the right word for such a hideous creature. I personally find the bloated/tumor-grown design quite disturbing and weird, but I guess that’s not necessarily a bad thing for a monster.

The second time in a row I didn’t manage to paint my mini, there was just too much other stuff to do before that *sigh* I loosely planned to do either a slimy mutant or something in pale blue, though. Maybe one day… 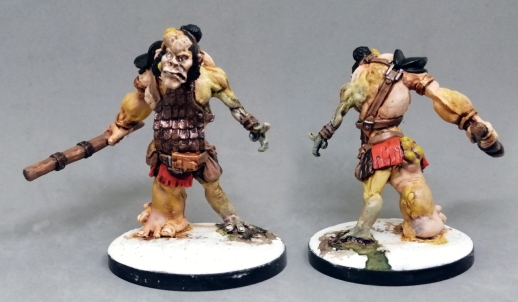 He says: “There were so many different possibilities to paint this one that it was hard to choose. In the end I decided to make a monster for a resting campaign in rokugan, in the hope that the adventurers will ride again. It is meant to be an ex-samurai from an extinct clan (the belt buckle gave me the idea), tainted by the shadowlands. I wanted to paint his left extremeties as if they were withered and atrophied, and I’m very pleased with the result. The right big eye got a small pupil looking in a different angle to show how madness overcome this fellow. It’s not quite finished, I want to add battle damage and rust to the armor and give it a suitable base.

What do you think, what kind of terrain complements this guy?”

He wrote: “I can honestly say I’ve never painted a Fomorian Giant before! I was really looking forward to this one but ended up struggling more with him that I expected. The head and face came out the way I wanted but I’m still not satisfied with that bloated leg. I went for a really rusty and worn look on the armor and club. It seems to have come out pretty well. Overall, I’m happy with him. I actually misread the schedule and was just starting on the ettin when I double checked and realized my mistake. Fortunately, I still had plenty of time which I apparently needed!”

Your giant is definitely the most human looking of the bunch, maybe some poor guy/ogre/giant living just too close to a cursed swamp or an alchemist’s den? I now imagine him working for the alchemist who employs him as some kind of guard, but why? Out of kindness, remorse, or maybe for some sinister plans…?

He said: “This was a mini that I started to like more while I was painting it. I chose a light blue skin with a red wash. Lately I have been experimenting with more exotic skin colors as you may have noticed.

I had some trouble photographing the mini. The red wash at first it did not show up on my photos at all, and even now it is less on the picture than on the real mini. On the mini the red rims around the eyes make the eyes stand out more and give the mini an even more sick-looking appearance.

The fomorian has to make do with old, ill-fitting armor (an interesting idea from the sculptor), so I chose to make it an aged green copper armor which gives the mini a lot of color and goes well with the blue skin.”

I really like the skin tone on this one, for some reason I envisioned painting my fomorian quite similar! Painter’s hive mind again, I guess. And you’re right, the armour’s color is a good choice that adds a lot of contrast, too!

Timothy’s fomorian has the meanest glare:

This guy is definitely the winner in any staring contest – he looks like an aggressive maniac who’s ready to charge. And since you also picked a light human skintone, he could totally be some backwood mutant, ambushing a group of adventurers.

Michael’s fomorian is a fey;

He wrote: “I was going with the 4th Edition lore where fomorians are the tyrants of the Feydark, so to make him exotic, I went with blue skin. The tumorous and swollen right side has some pink blended in and purple wash. Being fey, his armor is copper, but I put a layer of verdigris from the subterranean dank. I think his evil eye came out pretty well too.”

I love the skin color, he looks really bloated and swollen and very non-human. The evil eye is also a cool idea. Overall the color palette is very harmonic, and the blond hair was a good choice. 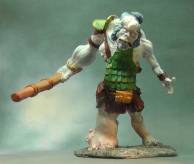 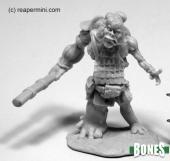 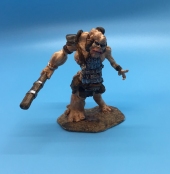 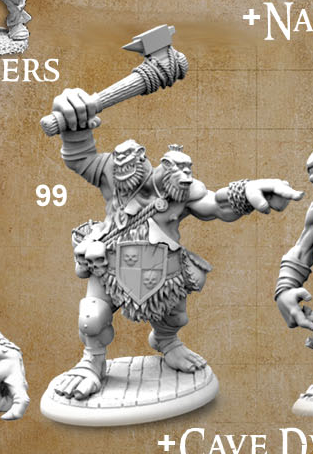 Want to participate in the next post? Email the pictures of your minis until Friday 05/22/20 to

Here is the underdark Add-on.

This is a big one, so we’ll stretch it over two entries!