The full moon rises, and it draws out all kinds of big, furry, heavily clawed animals… maybe even the occasional X-Man. For now, let’s have a look at the werewolf!

Werewolves are a staple of classic movie monsters and can find their use in fantasy and even sci-fi settings like Shadowrun – and now I wish I had thought of this earlier because I love to genre-swap miniatures. I could have converted the wolf into some cybered creature, like I did with the minotaur recently, or given him a gun and a belt to make him a sci-fi mercenary…. Well, next time.

The miniature itself is quite massive, with nice detail on the sculpted fur, and although the bent over pose is a bit dramatic it’s still possible to paint without too much trouble.

He painted the werewolf with dark greys and black, and I love the result, especially in combination with the red eyes. It’s cool how the color variation within the fur (darker on the back and arms) make it look natural without much effort. And this snarly grin looks wonderfully vicious, doesn’t it?

I tried something else:

Since I got all my good ideas *after* painting the mini I wasn’t sure how to paint this one, as I was sure we would get enough of the classic or natural looking wolves and I wanted some variety for fun’s sake (this is what Mini Monday can do to you, really!). When I checked the other were-creatures from that Kickstarter I noticed that the were-boar combines well with the werewolf because they look like they are charging right at each other. They will have an epic clash, and since I think the were-boar’s mane looks a lot like fire, I painted the werewolf like ice for a contrast.
The boar is not ready yet, but I could at least play around with blues on the wolf. Note how the claws are light flesh colored because I figured a pale-ish skin type would have transparent nails too.
The snow is baking soda, btw., we should really do a post about using cooking supplies for basing 😀

Michael’s werewolf is of the grey variety:

He wrote: “Here’s my werewolf. Nothing too fancy – a lot of drybrushing and then some detail work. I did coat the base with Citadel’s Astrogranite texture paint for something a little different.”
Did you use only grey and black beside the eyes? It’s an interesting effect, as if the wolf was a stone statue himself. And the texture paint, how does it work? I can’t really discern it on the picture, are there pieces and grains included to roughen up the surface? Never tried that one, I’ll have to check it out at the store.

He said: “To be honest, this was a very easy mini to paint. Just some drybrushing for highlights. the mini has very good detail that is easy to bring out. I chose a classical look.”
His palette includes brown, that’s why I thought of an european or eurasian wolf – I’ve been studying eurasian wolves and their coats show a lot more brown than their new world counterparts. The lighter face is a nice idea, it provides good contrast to the dark lips. Do you have any plans to use this mini on the tabletop?

He wrote: “I did manage to get my Werewolf done (in one night!) and I’m pretty pleased with it. It’s a little rough but the head, face and eyes worked really well on this one. I managed to get the irises AND pupils. I like this one because it’s a very ferocious sculpt which is appropriate.”
The eyes look very cool indeed, I was glad I could paint them properly in just one color, didn’t you find them too tiny? Pupils certainly add to the threatening look for! I also like how you created a color gradient that draws extra attention to head and face. 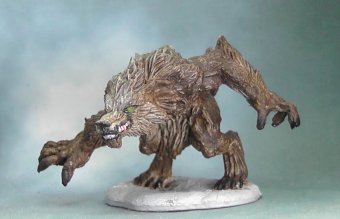 Want to participate in the next post? Email the pictures of your minis until Friday 03/15/19 to