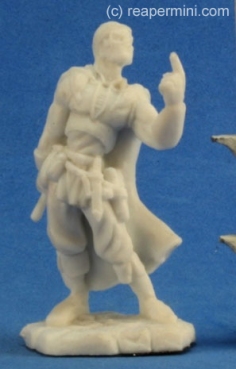 After heroes, monsters, withces and barbarians once again a rogue sneaks up just behind you, a dagger hidden in the folds of his cloak…! (posting by Antonia)

I really like the design of this week’s miniature, the whole pose conveys so much of character and disposition, like a one-person-diorama. Is Dub threatening someone wit his bare hand, just to keep the weapon as a hidden option? Or is he calling someone closer, maybe sweet-talking them, just to attack the second they are in reach? I’m not completely sure, but either way this rogue comes across as a very shady person.

Unfortunately, as much as I like the concept, my version of the model did have some flaws, mostly heavy flashing/mould lines all over it, esepcially annoying in the facial area, and when I tried to remove them there I nearly leveled the already slightly distorted face. A shame, because I could imagine this guy as “roguishly handsome” (sorry), now he’ll probably never get someone to voluntarily come close enough to use that dagger… Poor guy, back to sneaking and backstabbing, I guess.

Anyways, since I DM in a certain D&D campaign I made Dub Bullock a “nautical rogue” aka pirate!

Not sure why, but blue/white striped trousers always give me the “pirate” vibe, so I went with that and used some more colors to enhance the look. A beard helps to hide his face. I also smoothed his hair out (using liquid greenstuff) to give him a bandana, and painted the upper part of his boots like the pants resp. some bare skin. Now he looks like he is wearing only shoes, much more fitting for a tropical climate, right?
The beach base was made with basing sand, a bit of color and several layers of gloss varnish on some areas.

His mangled face aside, I love the result and how, with a few simple changes, the miniature got a whole new look. Arrrg!
Michael’s Dub Bullock is also not afraid of bold colors (or anything else, of course!)

Michael wrote: “I did get my Dub mostly done today. He needs all his accessories painted and a little clean up, but is coming out pretty well. Can you guess my inspiration for this one?”
Unfortunately, no – I’m really sleep deprived right now (partially from painting late last night *sigh*) so the color scheme looks familiar but won’t come out of the back of my mind right now. Can someone else guess it? Otherwise you’ll have to reveal it yourself and give my poor head a rest 😀
But whoever inspired it, the color palette is cool, I always like the combination of red and black, it can look all the way from regal to dramatic evil.
Sidenote: Now I realize that this cloth thingie on his belt is actually part of his shirt! Well… I guess I was thrown off course by the different direction of the folds in it. Your take makes much more sense! And as always, if you manage to finish the details, feel free to send another picture and we will update the posting!

UPDATE: Here is the finished one! Great work, and I otally get the “Gutter Gaston” now 😀

Jim’s rogue shows that striped trousers are definitely a trend! 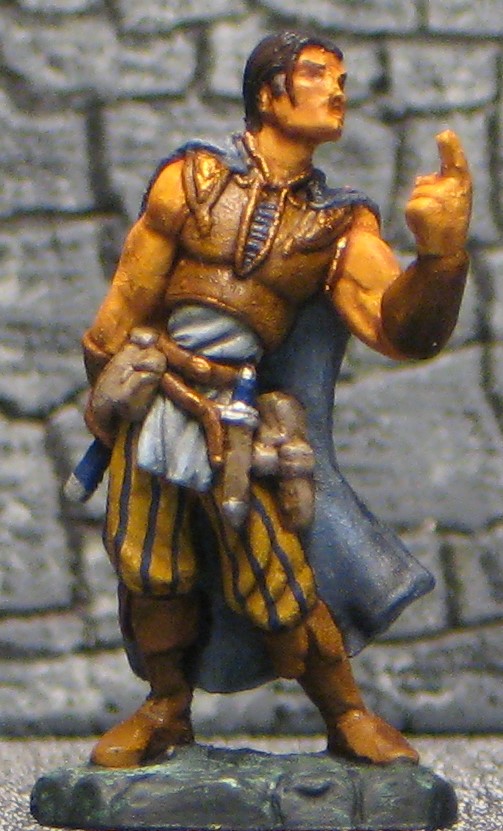 He said: “My Dub is sort of a WIP as I hadn’t finished the base when I took the pic. I went for very brown skin on him to hopefully imply a desert/middle-east setting. I picture him as a very unsavory character in the vein of an assassin or an enforcer. He comes across as a mean, intimidating and thoroughly unpleasant individual. I’m pleased with the mini and colors even though he barely got done between other projects. Sometimes quick is best. His face was pretty soft especially on the left side but doesn’t look too bad now.”

I like how you picked a reduced color scheme with ochre, blue and some browns, it gives the model a cohesive appearance. The pants look expensive, so maybe this guy works for a money lender or crime lord/lady who needs his/her assets well “taken care of”! And again your picture helps me to pick out the last details which I missed on my miniature. I might have asked that already (sleep deprivation and everything) but do you use painting glasses? Or just your eagle eyes?

Here are this week’s miniatures in the galley:

Want to participate in the next post? Email the pictures of your minis until Friday 03/01/19 to