Witches are a scary thing, even if you aren’t a little girl from Kansas, especially if they come with flying monkeys. Mechanical flying monkeys! Come and follow the cackle to a great variety of miniatures…! (posting by Antonia)

First of all: We will stay in the mode of doing a Miniature Monday every other week. I really like the bi-weekly rythm, it gives you some time to work on the models, and with a small kid everything else is totally unrealistic *laughs*.
I simply messed up the dates when writing the schedule, which I’ll correct with this posting.

Second addendum: Since our son was ill and not in childcare today, I wasn’t able to write individual comments to your contributions (sorry for that!) and will simply post the prepared article plus whatever you shared about the painting process in your emails.

The Wicked witch and her monkey are some of the miniatures featuring the new darker “bonesium”, which they call “Bones Black”, although it is more of a medium gray. I’m not sure if there are differences beside the color, it’s maybe a bit more rigid, what was your impression while working on it?
I did notice some very visible flashing though, and even after cutting most of it off I still kept finding more areas…
I painted my witch in my son’s favorite color:

I’m honestly not sure why I picked the mini in the first place, because although the minis themselves are interesting, I didn’t even have a precise idea how to paint them. Since my son loves a TV show featuring cute versions of classic monsters I decided to use purple and red as my main colors (I didn’t go so far as to choose pink, which he likes even better than red, because I had the faint hope of using the mini in some kind of RPG where pink would just have been too much.)
To make sure that red and purple didn’t clash I had to use relatively dark tones and some white elements to balance that, but overall I think the color scheme is okay, might even look good if I ever find the time to do at least some simple highlights or even layers on it.

The monkey was done in matching deep red, with some golden elements and washes. Quick, but effective. And yes, now that I realized the monkey has the same colors as Iron Man, I can’t unsee it either *lol*
Dirk did a “Wicked Witch of the (Old) West”:

First he wanted to paint her in a classic “Wizard of Oz” style, but then he got the impression she was wearing some kind of duster and decided to make her a cowboy version. At the same time he wanted to keep some defining elements like the red and white stockings. Like mine his Miniature is a bit of an WIP – he plans on doing some kind of “spell effect” with water effect paste on her open hand like she was just casting a spell.

For the monkey he used plain silver with some details in red and blue-gray to tie both models together. 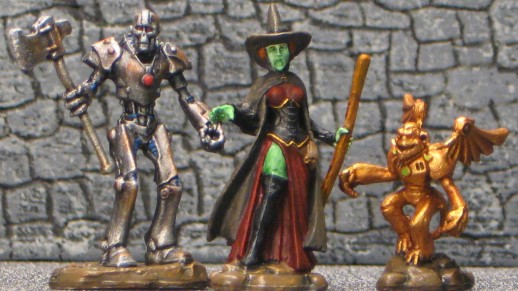 He wrote: “I ended up doing the Witch’s skin green like in “The Wizard of Oz” even though her outfit is very different. The monkey is just good old bronze and for a bonus, I did the Tin Man as well. I actually liked my Tin Man better before I threw on a little rust but he still came out pretty good. I have no use for him as he looks totally robotic to me but maybe something will come up!”
Michael ended up painting the whole posse: 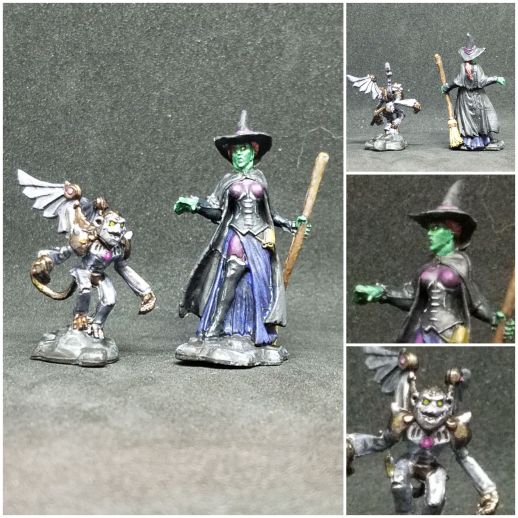 He wrote: “I couldn’t resist doing the entire Oz set when this one went on the list. These ended up being a ton of fun, and I like how they all turned out.”

Arjen focused on the flying monkey and gave it a whole new look (and species!):

He wrote: “I have no use for flying monkeys, so I changed mine into a quasit (yes, they normally are tiny, not small, but it is still better than using a bat or something.
Somehow the red eyes become brownish in the picture. Apart from that, no fancy stuff here: green base, red wash, very slight highlights.”
This week’s gallery: 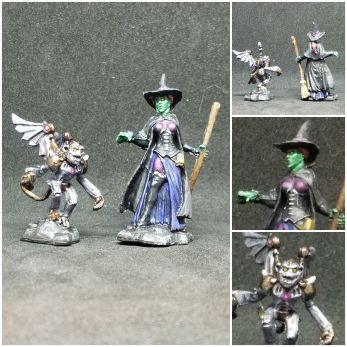 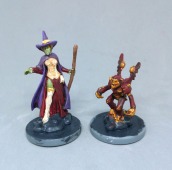 Want to participate in the next post? Email the pictures of your minis until Friday 02/15/19 to