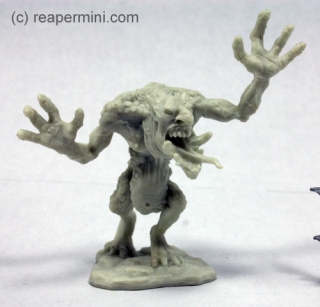 After a weekend full of sweet chocolate, cute bunnies and beautiful easter eggs, we present you some quite ugly things people painted for easter  😀

The miniature of the Pathfinder Troll has a medium amount of detail, I’d say, and some painter’s found the face a bit cartoonish and exaggerated, which I can’t really deny. Still, I can live with a troll being deformed and ugly, plus we found many textures and large surfaces interesting to paint and a good way to test colors and techniques. My version had the problem that the thin legs bent easily as soon as the mini stood too close to even just medium heat (like a radiator for example). I’ll have to take care in the summer…

Dirk used the mini to experiment with colors: 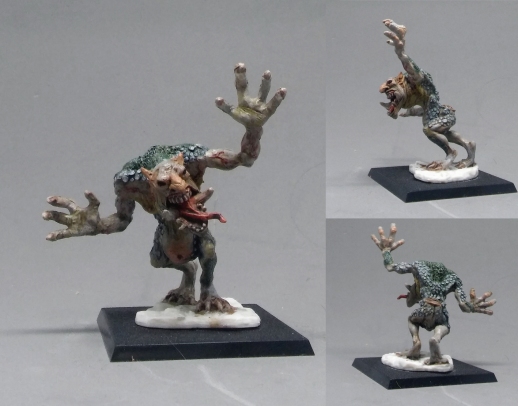 He didn’t want to use the traditional greens, so he used brown, pink and muted olive and their color trasitions, which worked out very well, in my opinion, to give the troll a natural and realistic look – Dirk is also very happy with the result. He plans to use the mini as part of a warband in a tabletop game, so he’ll do the basing work later when all the minis are all together.

I tried a special technique again: 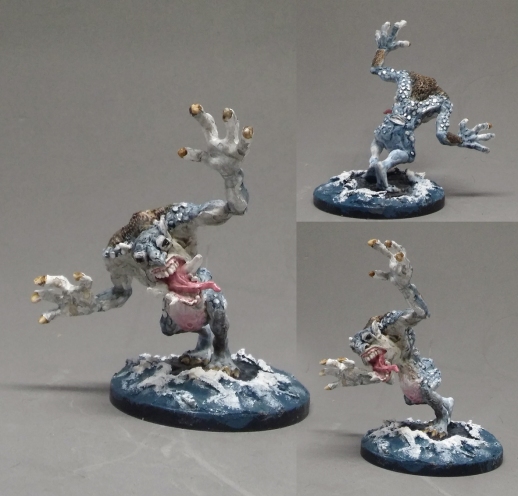 Like with the fly demon some time ago I mostly used washes and inks to paint my troll, many quite diluted layers. I used a white base coat, though, because she had covered the gap between head and body with liquid greenstuff. The only other opaque color she used was Vallecho’s “Metal medium” on the back scales to give them a mother-of-pearl appearance. I like the overall effect – the color scheme reminds me of a white shark, and the washes allow for really smooth color transitions. For the water I roughly spread some body filler on a larger base, painted it in greenish blue and white and covered it in gloss varnish. Maybe I’ll add some water effect later but for the moment the water looks quite good already. 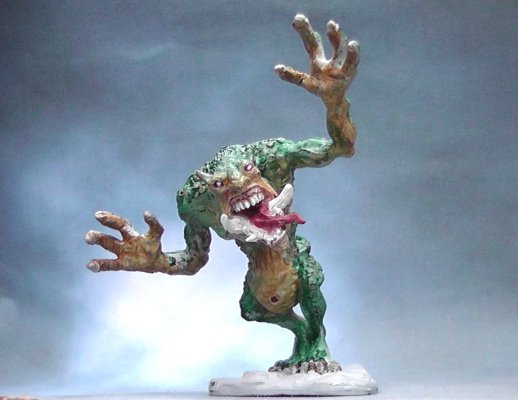 Arjen was not too happy with the cartoonish style so he decided to paint it just “playable” in a classic color scheme. Still, I think the effect is not too bright, I’d say, and at least from this view the troll looks in fact quite dangerous! The eyes have a great “glowing with rage” look, is that white with a wash on top? Well done!

Jim has had a love/hate relationship with trolls in general:

He used a traditional color scheme of greens and browns with variations on belly and scales. I really like the organic look (the gums have a great color) and the detailwork, especially at the veins. Jim painted the eyes completely black, and I agree that it gives a very creepy effect! You wrote that you hated troll as a player but now, as DM, love them – do you already have plans how to use this mini in one of your games? 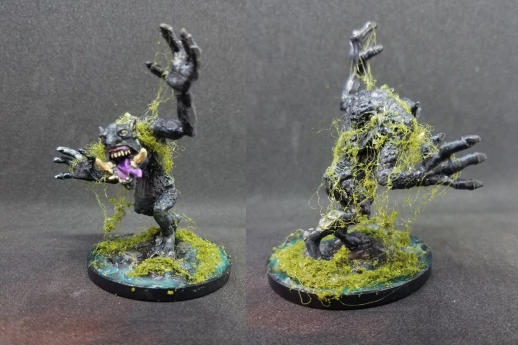 He kept the swamp setting for his troll, but gave him a black skin color. He drybrushed it with gray as a highlight, and washed it with Nuln Oil Gloss to make his skin look slick and gross. He based the mini on a large creature base to have enough space to put some water effect on it. He swirled in a mix of Spruce Green and Blue Ink immediately (not letting it cure first), and several days later added the foliage. He smeared a little more water effect into the foliage to make it look wet.

I really like the overall appearance of this mini and how it interacts with its base. I imagine the troll springing from its hiding place in the swamp to catch some unsuspecting travelling adventurers. 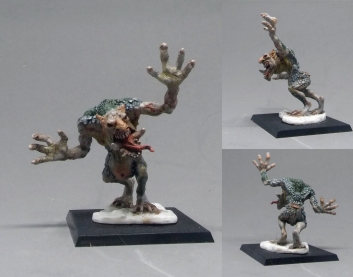 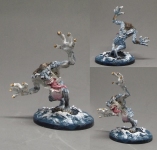 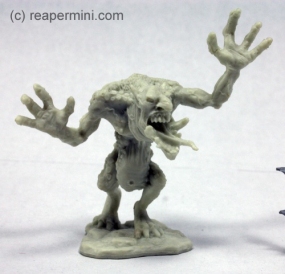 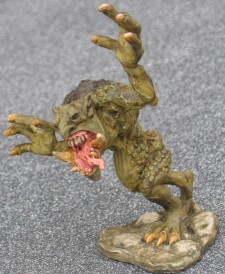 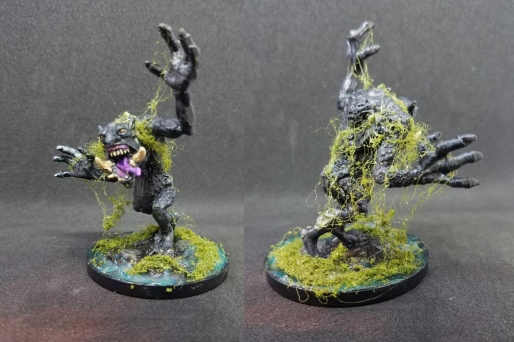 Want to participate in the next post? Email the pictures of your minis until Friday 04/13/18 to