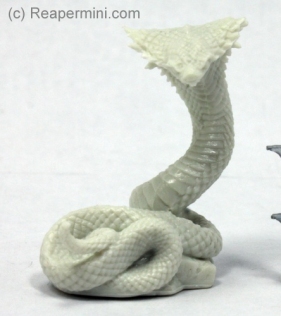 This week we painted the Queen of the Snakes: A truly gigantic cobra!

When I first saw this model while unboxing our Bones III shipment, I knew I wanted to paint it – crisp detail, fine scales that work well with drybrushing and washes, and I’ve always been a fan of critters and animals, because I like to research patterns and coloring.

I decided to paint my cobra as some kind of semi-magical beast:

I used a bright color scheme sported by small, tropical snakes – since cobras are quite large for poisonous snakes, their colors are relatively muted and earthy in real life, but since my version is able to excrete some kind of flammable substance to fend off enemies (go figure!) I chose traditional warning colors. First I wanted to do standard yellow/red flames, but Dirk had the idea to make them blue so they’d stand out properly from the scale color. As usual the flames are made with Vallejo Water effect in several layers which were only partially painted to have more of a translucent effect.

Dirk’s cobra is not a living being but rather a construct: 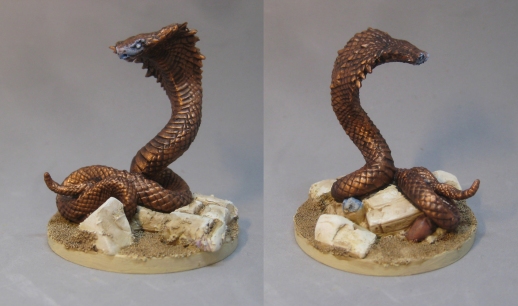 He used a relatively simple approach with one base coat in bronze, Army Painter’s dark Wash and a drybrushing on top, but I love the result – it really looks like metal, doesn’t it? It gives me the feel of the old Harryhausen movies, like Sinbad for example, which intricate stop-motion monsters and a fair share of constructs! The subtle glow of the eyes fits in wonderfully, too! And in case you were wondering about the base – we both glued the mini on a larger round base (I think it’s even one by Reaper) and added some styrofoam pieces which I roughly cut in bricks and textured by scraping on their surface with… well, my finger nails. Anything works that indents and/or smoothes surfaces and edges. Painted in the same color as the other stone pieces I think they fit perfectly!

The coloring came out really life-like, did you research that? I remember seeing a cobra in a zoo some time ago, and that’s exactly how it looked like! Well done 🙂 I presume you used brown or sepia washes on a light beige basecoat? The bone colored canopic jars on the base are a great detail, by the way, I didn’t even realize they were there but after I flocked the whole base…!

Michael’s inspiration came not from real life this time:

He wrote that the color scheme is based on the Midgar Zolom (Midgardsormr) monster from Final Fantasy VII. I never played the series but I have to say the pattern is a really effective choice!  I could imagine it for a whole group of reptiles, or maybe something like Warhammer Fantasy’s Lizardmen Armies (at the moment they are called “Seraphon” I guess but that name doesn’t resonate with me at all). And I totally love the eyes – they give the perfect, piercing villain-look to the whole beast! 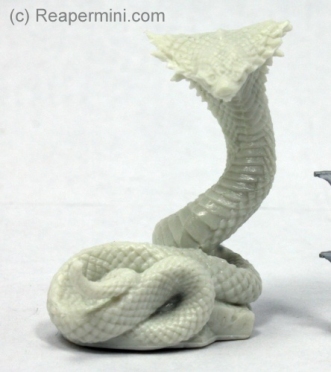 Want to participate in the next post? Email the pictures of your minis until Friday 03/02/18 to

(As you can see I prepared a lot of date entries but am still looking for mini ideas. Post your suggestions if you like! The ‘Type of mini’ placeholder ist just that, if you want something else tell us!)