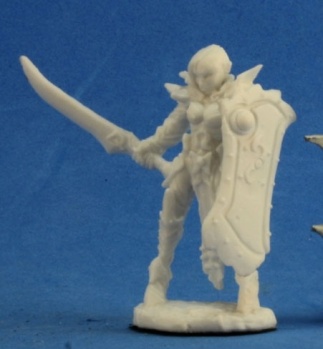 The black knight, the anti-paladin, the dark champion… this and more are the names of the antithesis of the white knight, an iconic figure in literature and folklore. Often the right hand of an evil tyrant or king. But nobody said this embodiment of dark virtues can´t be female… click here to see how our readers breathed life into this remarkable miniature.

Antonia and I had a very busy weekend, so my wife didn´t succeed in painting her version of Cassiatta. I painted all night long to finish her, as I wanted to use her as a main antagonist in a roleplay encounter (leading my gnolls… and bugbears if I finish them).

My inspiration was a picture of the Thayan knight from D&D (for which I will use her), but figured she bore a resemblance to a blue-lipped-black-knight in an well-intended-but- not-quite-successful-D&D-motion-picture we just re-watched. But I skipped the red ears ;). I used blue on the blade and the stone to link with her skin, and red on tunic, shield and sword to match her tattoo. The armor went just plain black as appropriate for this character and not to bring too much color into the mini. All-in-all I´m satisfied with the colour sheme.

David R. was inspired by the symbol on the shield, which let him think of Tzeentch from warhammer, so his choice of colors was a little different from mine: 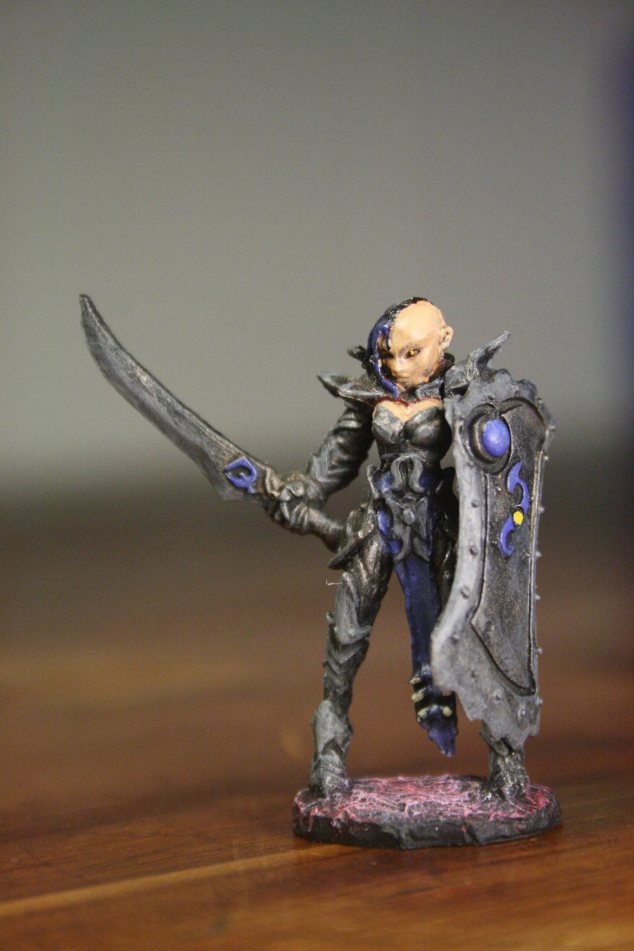 I think this mini works well with a small color palette, just some accents, the main emanation comes from the face. David wrote that he tried a new method of painting skin and was satisfied with the improvement. I like it too, it´s a very smooth skin. And the eyes have a very clean edge . Did you start with the eyes and worked out from there, or did you paint them into the finished face? I had to repaint the face several times…

Our last (but not least) entry this week is from Arjen:

He used a similar color palette to David, which was inspired by diffenent sources. His aim was to find a paint sheme that works for both evil and good characters. In my opinion dark blue works fine for this. And it is a brilliant way to make the mini useable for diffenrent things. Do you want to use Cassiatta (or Casiatta as Arjen told us is the name of the metal version) for a roleplaying event?

My favourite is the white hair, reminds me of Storm from x-men. I thought about using white hair on my mini, but I had the wrong skin color for this, it wouldn´t had turned out so good as on Arjen´s. And it´s a nice warm skin color.

So this time we had the classical dark knight, the champion of chaos and the one that works for good or evil. I like miniatures that could be used in different ways, and it is fun to see what others make of it. Next time we will travel faaar way to the east. I think this samurai also has the potential for very diffenent looks. I hope you astonish us with your interpretation…

Want to participate in next week’s post? Email the pictures of your minis until 06/19/16 to