I know I shouldn’t have left yesterday’s pizza out in the open – now the box is shredded, the pizza lost and the cats are traumatized … Did you have similar rodent problems? Let’s see what crawled up from the sewers this week.

M version of the Barrow Rats was painted some time ago, when I needed some monstrous rats for threatening PCs in an ongoing D&D campaign.  I’m sorry for the crappy pic, the rats were just too dark for good lighting and atm I don’t have the spoons for other pics. 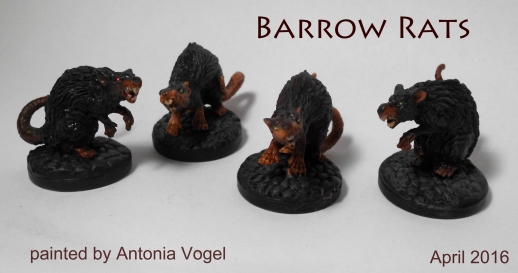 Since the rats in question were supposed to be large/dire rats, but not plague bearing ones, I covered the naked skin areas with sculpted fur. I also used simple ways to change the pose, e.g. cutting off the tail and glueing it back on in a different angle. You can even do this by heating, although I feel the mini goes back to its original position after some time, so I play safe and glue.

For colors I chose black and different browns which somehow gave some of them a rottweiler look, as it seems. Some got red and some got green eyes.

Overall I didn’t spend too much time on the giant rats, but putting them on the table had still a nice effect – on the players 😀

Aaron also painted his rat some time ago – since he moved later and has most of his  bones minis stored away he sent me the link to his blog where he presented his already finished projects.

He chose reddish colors, which work perfectly with the red pustules for a raw and inflamed look – one touch and infected fluids will seep out! Disgustingly well done 😀

Arjen skipped last weeks mini to have some extra time for the rats, and I think it shows:

He said he went more for the overall look than for detail, although the eyes, ears and pocks still come out very nicely. And I love the impression of “dry rot” that the greyish colors give, as if the rats were covered in mold and fungi.

They remind me of H.P. Lovecraft’s classic story “The Rats in the Walls” which is worth a read (even if some things, like the cat’s name, are rather questionable nowadays), you will get what I mean 😀

And here’s this weeks gallery:

Want to participate in next week’s post? Email the pictures of your minis until 04/10/16 to

(Wishes? Ideas? Tell us via email or in the comments!)