This week we’ll see if the community’s painting efforts were worth a thousand year’s wait, or however long Drogoth, Undead Lord sat there on his throne… Hint: They absolutely are!

When I saw the model for thme first time it immediately reminded me of Conan, the Barbarian (the classic movie starring Arnold Schwarzenegger). Therefore I painted the mini as an old king or death knight, sitting there on his throne for eons. 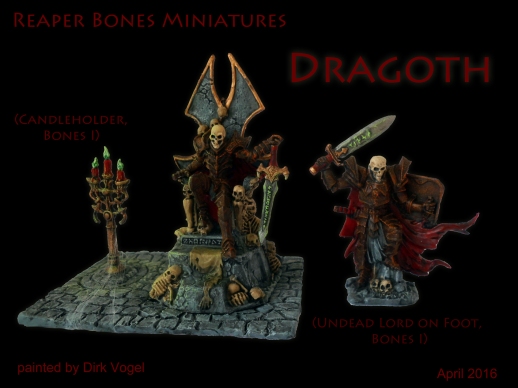 I made the armor look rusty, worn down by the ages, and even added some spider web fragments, made from the Halooween decoration spider webs you can buy from time to time. Only a little bit, visible around the base of the candleholder (which I had to add to give me sth I could the spider web attach to) but I like the look. The sword didn’t rust, because we all know magical weapons are much more resistant to weathering 😀

Like the candleholder, the death knight on foot is also from Bones I – I painted him in the same colors, just in case the dead king finally decides to leave the throne 😉

Overall I really liked painting the model, a lot of detail and structures which took the paint well.

David B. chose a similar color scheme, but his knight’s armor is in a much better condition (or probably magical too!), even showing off some detail in gold!

He wrote that this is one of the first Bones II minis he painted, and he didn’t attach the knight to the throne, so he can use the throne mini on its own, which I find rather clever – in RPG situations we find thrones empty much more often than occupied, esp. by a death knight :p

William wrote that he had fun with all the detail too. He chose violet for the cloth structures, and the metallics on the minis are remarkable too: 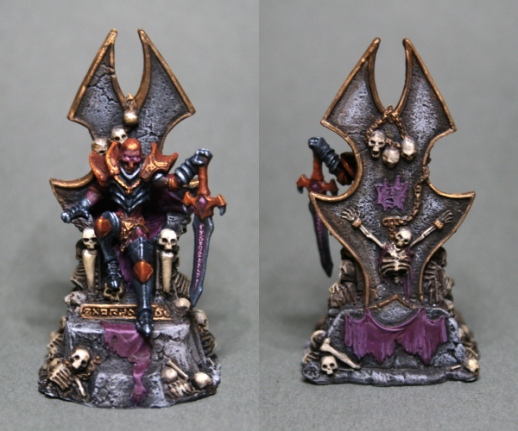 I like the combinations, blue/silver and red/gold, but the true eyecatcher is the undead’s golden skull – that one is obviously special and very impressive!

Want to participate in next week’s post? Email the pictures of your minis until 04/10/16 to

(Wishes? Ideas? Tell us via email or in the comments!)