Back in June I announced a bogging hiatus until September. Obviously I have overshot that mark. It has been a very busy year, but not too busy to make time for the important things in life. Since we last spoke I have:

The below chart makes the point pretty clearly. 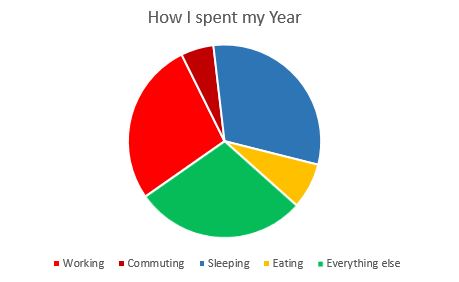 The green slice is the one I particularly care about. That is where life happens. This year it should have been filled with hiking and hanging out and creative projects, but it in reality a lot of it was occupied by the joys of moving (House hunting, packing, unpacking, and cleaning) and with decompressing from work. Like coming up from a deep dive, it seems like every hour I spend at work passed the traditional eight is matched with another when I get home to avoid the bends as I come up for air.

It is hard to come up with a ballpark answer as to how many hours I spent half watching reruns or surfing reddit to recharge in these circumstances, but if I had to guess, I would say too many.

A week half ago I realized I had done almost nothing on my novel for the whole year. I started the year with roughly 32 thousand words in the bank, and after 11 months that is where I was as the end of December loomed. How tragic.

In just the last week I have completed another 6 thousand words. Just think of where that pace could have gotten me if it had been started in the spring. I gave up regular updates on this blog to get time back to work on more important things, and I fear I have not used that time well.

2016 is the year I work on improving that. What about the rest of you? Do you have back burner projects that have managed to spend the year without ever once becoming the priority? What are you going to differently next year? 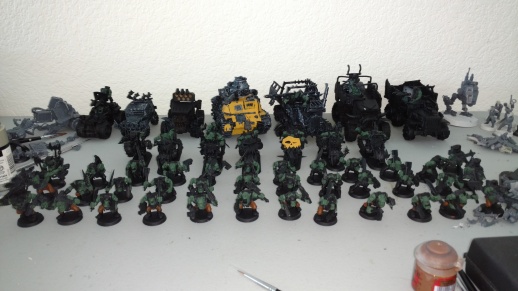 My Orks wish you a Merry Christmas, or they will as soon as I finish them.

PS: If any of you have any interest in the spring, I will be looking for beta readers for the sci-fi novel I am once again hard at work on.

Tags: 2015, priorities
This entry was posted by David Winchester.