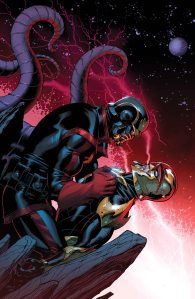 About a month ago I made a post about the ‘return’ of everyone’s favorite Nova, Richard Rider.  After basically falling off the map at the conclusion of Abnett & Lanning’s cosmos-shaking Guardians of the Galaxy run (rather, after being marooned in a vacationer’s paradise called “the Cancerverse”), Rider’s absence has been felt by fans for years now.  Now, over year and a half into the Brian Michael Bendis penned Guardians series, answers to the mystery of what happened to Nova are finally at hand… Or so we thought.

Damn you and your slow teases Marvel.

I should’ve known better than to expect any big reveals in Guardians #18, the issue which prompted my Nova post.  After all, why do in one issue, what you can do in two—or three, if issue #19 is indication?  Bendis, admittedly one of my very favorite writers, is not known for his pith, or for his penchant for getting to the point.  That said it’s his ability to spin a yarn that makes reading what Bendis writes so damn enjoyable—but only when all of the teasing and layers of detail culminate in big payoffs as each chapter resolves (see: practically all of Bendis and Oeming’s Powers, throughout).  When this approach doesn’t work, you get a meandering mess (see: more or less all of Bendis’ Guardians run, unfortunately).

What Guardians #19 lacks in the way of answers, it more than makes up for by way of action.  McGuinness is a master craftsman of the super-powered throwdown, and this issue is more or less a blow-by-blow recap of some of the climactic moments shared by Nova, Drax, Thanos, and Star-Lord (back in his much cooler, pre-movie days antique Kree uniform), trying to escape the Cancerverse with a damaged Cosmic Cube, all whilst battling the denizens of the Cancerverse and each other.  But as kick ass as all of that sounds, this interstitial issue continues to elide the answers we really want: WTF happened to Richard Rider, and why have Star-Lord and Drax been mum about it?

At this point, all I really want out of this title—answers to that set of questions.  Looking at the solicitations for the next couple of months, I should get my answers in issue #20.  After that, a whole new story arc spins up.  And it might just be spinning up without me.

While some might disagree, I think Guardians peaked during Abnett & Lanning’s run.  Under Bendis, Guardians has been characterized by a string of temporary teammates, somewhat schizo portrayals of core characters, and the inclusion of (gag!) Angela, the spoils of Neil Gaiman’s legal battle with Todd MacFarlane.  All things considered, this entire run felt less like a series of crescendos building to exciting peaks with each story climax, than one long slog to ensure that a Guardians title was in print during the lead up to media frenzy surrounding the much more Abnett & Lanning influenced film.  The only part of volume 3 that has been consistently good is Rocket, because Rocket is… Rocket.

For all the glorious carnage in issue #19, with only so many comic dollars to go around, this issue is contributing to the sense that my dollars maybe better spent elsewhere, like perhaps on Dan Abnett’s Guardians 3000 (look out for an issue #1 review of that title next week!)  After I finally get the closure promised by issue #20 that is…