“What was will be. What is will be no more.” 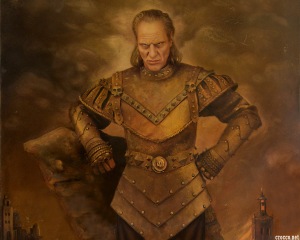 He does not look happy with the state of TV today.

Astute readers will recognize today’s titular quote as a reference to Ghostbusters II. In context, Vigo, undead beauty pageant winner and the so-called scourge of Carpathia, was talking about a thousand years of darkness under his rule from beyond the grave. In a totally comprehensible and in no way forced parallel that makes perfect sense in my mind, I think Vigo was actually talking about television today.

I love movies and television. I really do. But it’s getting freaking weird out there. It’s almost like the last of the original thoughts have been sucked out of the room. I’m a believer in story theory: there are only so many plots, character archetypes, etc., which is why how you combine them, and the trappings you cover them in matter. The details are how you distinguish yourself from all the other parallel stories. The endless cycle of reboots that film and television have embarked upon are basically a way of doing all the set dressing on the intellectual and creative cheap. Sometimes the reboots are fun (see: Robocop) and other times, they’re just terribad (see: Total Recall). That said, I can’t help but feel like we’ve finally crossed the Rubicon with some of these ‘new’ shows.

First, but far from the strangest on this tour is FX’s new series Fargo. Based upon/loosely inspired by the 1996 Coen Brother’s cult classic of the same name, FX’s Fargo is only loosely connected to the original by locale (they are both situated in Fargo, ND, natch) and by tone (they are both darkly and perversely funny). The TV show portrays an all-new fiasco in America’s heartland, with a whole new cast, including Bilbo Baggins (the young one) as a sociopath, Saul Goodman as a well-meaning if naive lawman, and Sling Blade as Billy Bob Thornton (someone will get that joke, I know it).

Annoyingly, the show is quite good–not True Detective good, but decent enough to keep me watching. Why is that annoying? If there was ever a movie that didn’t need a follow-on television series nearly twenty years later it’s Fargo, that’s why. Any lingering interest audiences had in the Fargo-verse was neatly resolved by a pregnant Frances McDormand and a wood chipper. Still, I know this show is just going to clog up my DVR until I see Doctor Watson’s ankles sticking out of the business end of a John Deere Brushmaster 5000 at the end of the series…

But we haven’t even begun to reach peak strangeness. Not to be outdone by FX, SyFy has announced that they will be producing a television series based on Terry Gilliam’s 1995 time travel flick 12 Monkeys, as part of a ‘new’ content strategy for ‘original’ scripted programming. Now, don’t get me wrong—I adore Terry Gilliam, but 12 Monkeys isn’t even Gilliam’s best movie about time travel (which is Time Bandits, duh). Also, like Fargo, 12 Monkeys didn’t exactly leave the plot unresolved. In fact, with such a lovey, dark, and recursive ending on the film, I can’t imagine ever revisiting that world except to enjoy what is there already. Any TV spin-off would pale emotionally, which means the show would really have to focus on the feckless bureaucracy of the dark future, making it sort of a post-apocalyptic Parks and Rec… which actually sounds kinda cool… But damn it, it just ain’t right!

Another recently announced resuscitation, and one I’m far more hopeful for, is the Farscape film, now in preproduction. Also a product of the late 90’s, Farscape was a wonderful space opera (that still holds up, thanks to practical effects and the Jim Henson Creature Shop). After its too-soon cancelation, fans got a film to tie the lose ends up. But the story didn’t end—it just transformed, and continued in comics. The show’s creators propose to pick up after the comics continuity—decades of story time after the show ended. It’s weird, ambitious, and rarely attempted, but it might just work (not to mention, it makes we wonder if there is a future for other culled-too-young shows like, say, Firefly…)

To paraphrase my hetero life-mate David, “In ten years time, there will be no new media. Just a cycle of reboots and re-imaginings of things we liked in the 80’s and 90’s.” At this rate, I’m inclined to agree with him. Of course, we won’t have truly achieved full-on entertainment implosion until Scott Bakula returns to the small screen to play the part of Al, the plucky hologram sidekick, on a reboot of Quantum Leap starring Jason Siegel as Dr. Sam Beckett (mostly because he’d be hilarious in those episodes where Sam wears a dress).

As Vigo the Carpathian once said, “Death is but a doorway, time is but a window. I’ll be back!” What’s true of undead demigods is equally true of Scott Bakula.

Tags: Reboots, Television
This entry was posted by Chris Avery.