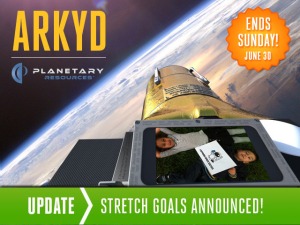 I’ve been on a bit of a sci-fi kick lately when it comes to both reading and writing. In the last 3 weeks I have devoured almost three thousand pages of good hard science fiction across 5 books. Perhaps I’ll do a post on that another time (and in the meantime I am accepting recommendations – my reading list grows short.)

So much of what is labeled sci-fi these days are really just fantasy stories with space props or space opera. Hard science fiction that really makes a vivid and alien future seem interesting without completely ignoring the constraints of science as we currently understand them is always hard to find though, even in the best of times. That’s not what I’m hear to talk about though.

Today I want to talk about how we are already living in the future.

Normally I wouldn’t advocate crowd funding to support billionaires. Larry Page certainly doesn’t need my twenty bucks to help fund a space telescope, so why am I not already halfway through a rant on how despicable this project is? After all, a million dollar project for a company with several billionaire backers is chump change at best.

Well – there are a couple reasons.

While the space telescope is not as interesting as the space elevator project funded not too long ago, it is certainly been more successful with funding – a trend that will carry over towards its impact on science in all likelihood. It is definitely pragmatic, and if we use it to find a few likely asteroids to jump start the industrial revolution in space, then more power to us as a species.

I for one hope that we see more high minded science-y projects on crowd funding, but what about the rest of you? Do you share my passion for the future, or do you think I’m just an apologist for big-space?

3 thoughts on “Space The Final Frontier”