I’m a Backer: The Keep 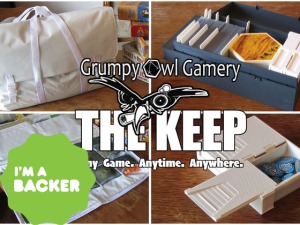 Welcome to another Wednesday, where we discuss projects so good I just had to give them my money, and tell you why you should too! This week we’ll give you the bad news first: Blackspace ended today, falling far short of it’s funding goal of $300,000; I was really looking forward to playing this game, so needless to say I am pretty disappointed. On the bright side, Fargoal 2, pulled it out, raising more than $10,000 funding in the last 24 hours thanks to a certain Kickathon, and funded less than 5 minutes from the closing bell. The best part of all that? Watching the reactions of everyone on the Kickathon at the time!

Today, in “I’m a Backer,” we transition from video games, back to board games – specifically, board game accessories – with the incredibly ambitious project, “The Keep.” This project doesn’t aim to create a game about defending a castle – it aims to create a modular storage solution for carrying board games when you are off to play at a friends or at the FLGS. Not only do I love this product – I actually need this product, something I can rarely say about my purchases on Kickstarter.

Now let’s dig into the specifics.

Any serious gamer has faced the challenges of trying to lug stacks of books, or piles of boxes to another house when game night comes around. And everyone with a passion for board games knows that unless you play a couple rounds of something back-to-back that set up and take down is a very appreciable amount of time in every session Wouldn’t you like a product that helps you out with both of these issues? You’re in luck, because the folks over at Grumpy Owl Gamery have you covered, with their fine product – The Keep!

The first thing you need to know about this project, is that it has already failed to fund (it was canceled) once. Doesn’t inspire confidence? You’re just looking at it wrong. They canceled the project because they we’re looking to do too much, too quickly and decided to step back with a new plan. Currently they are looking for $250,000 in funding, which only looks reasonable when you compare it to their previous goal of $750,000. Really – the biggest problem with this campaign is how ambitious it is. It’s hard to help though – molds, tooling, materials, shipping, warehousing, and enough inventory to reach economies of scale don’t come cheap.

The only other criticism I could level at this project is that there are many gamer’s who would never dream of parting with their boxes, because the artful display of the collection is almost as important as the playing of said games. I’m a pragmatist though, and would love the change to do a little condensing.

The product itself would require a lot of explanation, but fortunately the folks at grumpy owl made this great infographic: 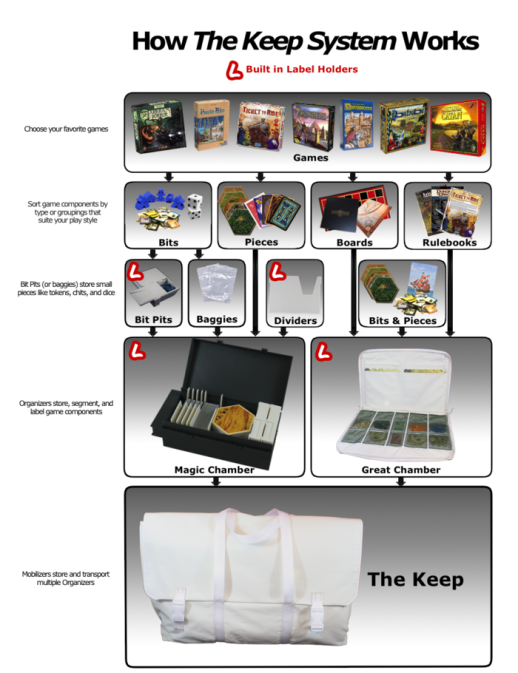 Basically, there is a place for everything, and that’s why I like it so much. The ordering of components, and their breakdown is intuitive and very organized. I could see this tool set increasing set up speed dramatically in certain games, all with the reduced risk of losing vital bits, thanks to the secure way in which everything locks together. I’m sold – but how much does it cost?

It’s a little on the pricey side. When you think about how you will be filling it with expensive euro games – it puts it in perspective a little more. Personally I loved the design of their previous project, but I think they made the right decision by going to cloth where possible to reduce both manufacturing and product costs. When you think about it, all you really need is 2000 serious gamers that want a Keep to make this happen, and that’s not so bad.

I had a chance to sit down with the creators of this project and ask them a few questions:

So where did the idea of The Keep originate?

If we go back far enough, Magic the Gathering in high school was a major influence. I carried a backpack with two Rook Cases for my main play decks, a corrugated cardboard box for cards I might play with, swap in, etc. and a binder with protective sheets for my trade cards. I’m pretty sure my OCD is founded in this game. Then I got really into Dominion™ – a fantastic game that poses several similar problems. It has many expansions with a variety of parts, making it difficult to carry and store. Second, with numerous cards to choose from, setup and cleanup is difficult without labels and a process.

There just wasn’t a case that really met my need – especially accounting for additional expansion room. As I began to work through these issues I had a realization – this was a lot of work for a game that might not always be my favorite. Not knowing what my future favorite game might be like, I decided to expand to include boards and other pieces so the case would still be useful long after I’d moved on from Dominion.

After spending a few months studying a large variety of games and components, I had the key specs. Shortly after, I brought in my long time friend and gamer buddy Roy and we came up with the preliminary design, featuring a small number of parts that were modular and broadly useful across games.

Beyond that, we innovated the Great Chamber after the first Kickstarter, resulting in a much better and more useful design, and we continue to look for other ways to improve The Keep System.

Why do you think this market niche hasn’t already been filled?

Most games today have all sorts of components, and most gamers own more than one game. As cool as they may look, game boxes are designed to sell the game and do not offer a lot in the way of protection or function.

Other products in this area are too specific to a component (corrugated cardboard box for cards) or a particular game (Game Saver for Monopoly), and only deal with organization in a rudimentary sense, if at all. These aren’t protective; the few that offer some protection have very limited capacity (Rook™ capsules).

Binders are a way to get some organization, but trying to play a game from one is essentially impossible. They’re really only suited to the display and trading of cards.

The Keep System solves each of these issues.

There are many challenges gamers face in storage and travel, but we’ve thought them through and fixed them in a way no one else has thought to do.

$250,000 is a lot of money for a start up. Have you considered trying to work with a larger company to bring this idea to market?

For a heavy manufacturing project, it’s actually not so much!

We have thought about working with a larger company but, simply put, a large company would commoditize this, and then discard it when it was no longer profitable enough. If I didn’t care about quality or want to get my hands dirty, I could certainly hand this over to someone and ‘cash in’ for a royalty. I won’t do that though because I’m unwilling to compromise on quality. For me it’s a reputation thing.

Gamers deserve better. We are going to give them better. We’ve done the work, paid out of pocket for the patents, the design engineers, solid models, and the prototypes, and we aren’t ready to hand over our idea to someone who just wants to push as many as they can out the door. Maybe I’m being selfish here, but I don’t want some big company trying to get rich off our idea by trying to implement it for mass-market appeal. This is a niche product, and I believe gamers are better serviced by a small company that cares about these issues. I can’t speak for the big company’s focus, but our focus is quite clear!

What games will fill your Keep most of the time?

I will definitely have a set of Magic Chambers devoted to Dominion that I can swap in as needed! Puerto Rico, Tichu, Sticheln, Ticket to Ride, 7 Wonders, Eminent Domain and Kingdom Builder will probably be regulars.

One cool part of doing the Kickstarter is all the new games I’m learning about. We studied many games and numerous components, but there is always a new game to check out. I think Small World may be an add for me, and Trajan is another one that looks right up my alley.

You outperformed your previous attempt after only a few days – what are you doing to continue to boost your funding trend?
There are several things we are doing right now:

We’ve gotten shout-outs from some really cool gamers and game bloggers – Jonathan Liu, Dale Yu, and Rich Sommer, just to name a very few. We are fortunate to have phenomenal backers. Many of them have upped their pledges several times, some have asked family and friends to back, and some have done both.

There is a trend on Kickstarter wherein some folks only back what they perceive to be a “sure thing”, and we are actively working to battle that. I’ve received several messages to the effect of “If this takes off I’m definitely backing”. We’re happy they see the utility of The Keep System, but if everyone had that attitude, no Kickstarter would ever succeed.

Tags: board games, Card Games, I'm a Backer, Organizer, Storage, The Keep
This entry was posted by David Winchester.