And here we go, ready your weapons and/or collection baskets for loads and loads of fungi!

The daycare is still closed, and will stay that way until further notice *sigh* so I’ll just try and hack together some sort of article to make sure you get to see the other painter’s contributions (and ours) in all their glory – and we have a lot of painted fungi around this time!

Disclaimer: I will use the expressions fungoid, (mu)shroom folk, myconids, sporelings etc. however I please. That doesn’t mean I know what I’m talking about 😀 I’ve only studied real world mushrooms.

I painted the “Queen” and some sporelings:

Since we only own one copy of the underdark expansion (blasphemy, I know!) Dirk and I decided to share the minis, and I claimed the big one, for a couple of reasons (“I like the mini” and “I couldn’t imagine to paint more than one time-wise” were the most important ones…)
When I examined the Shroom “Queen” close up I was a bit annoyed by the “sexyness” in pose and clothing though*, and how could I, a graduated biologist, accept a belly button on a fungus?! *lol* But there was a relatively easy fix* – I just “painted” a couple of extra vines on the skin with a tube of Vallejo’s plastic putty which has an elongated nozzle that worked just great for that!
The base has a couple of small shroomlings (I printed them from a file on thingiverse) growing in a fairy ring around the queen. I’m sure they appear wherever “she”** decides to rest for a couple of days.

*Bonus mental fix: In my head the Shroom Queen just had an interaction with humanoids and tried to assume a shape they’d be comfortable with. Fungi do grow quite fast, and if you think about the actual function of the sporocarp/fruiting body in mushrooms, “alluring” is probably dead on anyway 😀
**Biologist. Fungi don’t even have sexes.

Dirk got to paint all the other Fungoids:

He decided to add some extra Shroom folks from a previous KS (1 or 2?) so he’d have a big menagerie to work with
He will use the minis in one of our D&D groups as part of the same circle, so he chose similar color schemes for “body” and gills while the different caps help with individuality. As paint he used various washes and Citadel contrast paints over a light basecoat to get the more transparent colors of subterranean fungi. He wanted to test how that would work out and is happy with the results.

Michael used a mix of realistic and colorful schemes: 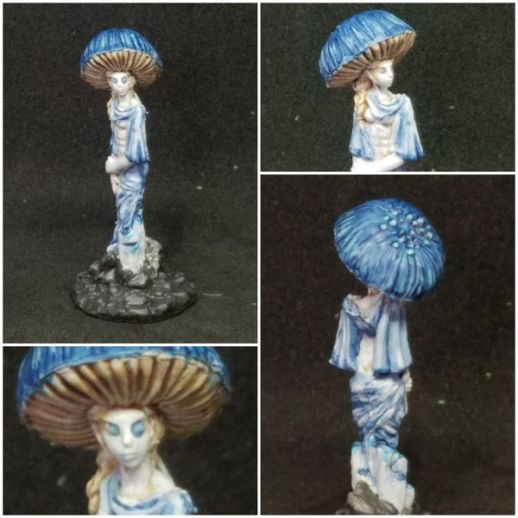 He wrote: “Here are all the fungus people that I finished so far. I thought that I might get the Guardian done too, but never got any paint on him.
I did these a few different ways. The two little guys and the handmaiden relied largely on Army Painter Shades to give them color over a very light base. I then highlighted back up and added a few more details. The bruiser was more of a traditional paint job. I was looking at turkey-tail mushrooms for him, but the others are just fanciful.”

Great job, I like the brown bruiser best, I think, it really looks like one could meet it in the forest. Scary idea, though… 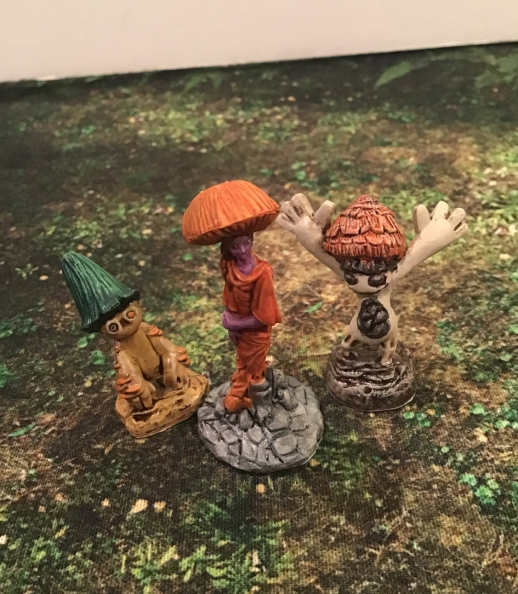 He said: “These are the only bones 4 mushroom people I had. I don’t know what a “fungoid” should look like so I just guessed. ”

I like how you added purple to the browns to make the humanoid one stand out more!

He wrote: “I decided to make a small dent in my stack of minis, so I painted 4 myconids, two from the bones 4 darkreach expansion and two from the Bones 2 expansion #1. The Bones 2 minis were heavily modded with greenstuff, as I did not like the comic appearance of the myconids. I have to say, none of the Reaper Bones myconids makes me happy in terms of representing a myconid the way I like them. I think especially the Fungal Guardian looks more like a scarecrow and misses that alien look, that in my opinion is what makes myconids interesting. All in all, I like the smallest mini best, the way it turned out, even if it has the least interesting paint job.”

Wow, I love the pale look and the modifications, the design totally gives me a scary vibe, even cthuloid for some reason. Which is totally a good thing in my world!

Jim (over)loaded his plate with fungi this week:

He wrote: “This week I bit off a bit more than I could chew! Also, I didn’t have as much time to paint, for a variety of reasons, so I didn’t lavish too much attention on any single mini. On the other hand, I did get quite a bit accomplished. Several of the minis still need a bit of work here and there, like the hair on the Queen and Maiden and many of the bases. Painting these minis was a fun exercise: Real world or Fantasy? Underdark or Surface? and so on. I did some based on real world fungi, but others purely from imagination. In any case, I don’t have to worry how to paint these guys anymore. I was a bit lost when I started. And truthfully, they came out mostly alright in the end.”

Nice collection you got there! I think you painted the most minis this week, you even painted the crystals and the translucent tentacle fungi (?), we’re still undecided about what to do with them…. The blue skin really pops, why did you choose that color? It makes a nicely strong contrast to the sulphurous yellow but seems unusual for mushrooms, did you get inspired by something in particular? 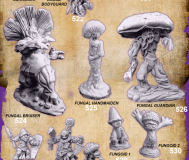 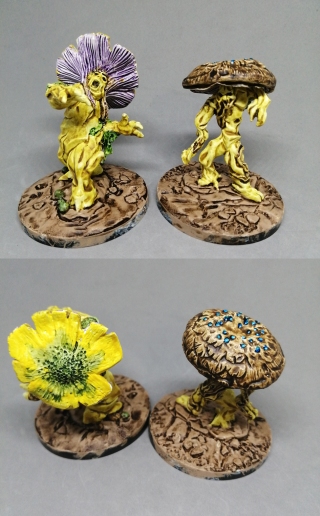 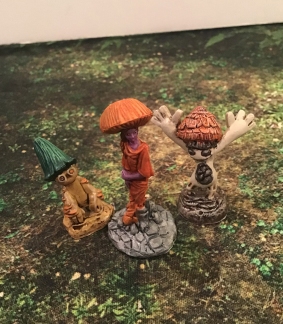 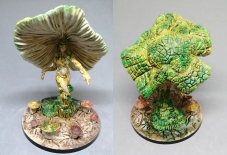 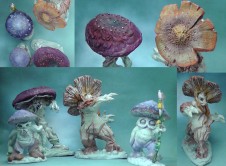 Want to participate in the next post? Email the pictures of your minis until Friday 04/10/20 to

Here is the underdark Add-on.