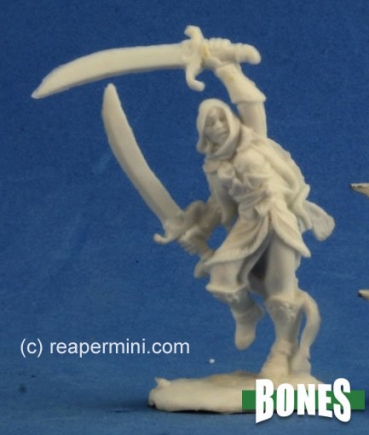 This week’s mini is a rather specific type which reminds me of D&D’s “sword dancer” class – I like the pose and sense of movement, although I’d say that the scimitars are a bit on the “comically large” side.

My sword-dancer is a pirate: 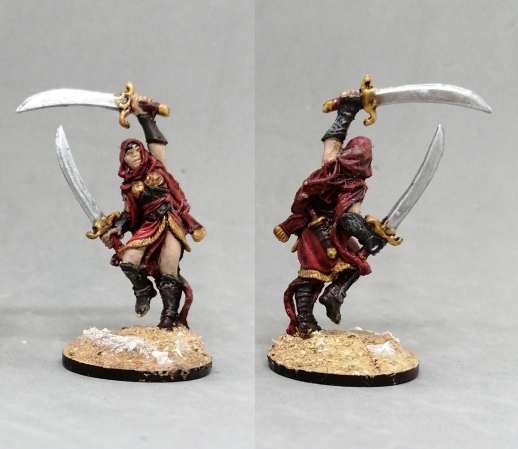 One of our D&D campaigns takes place in the (3.5) Kingdoms of Kalamar setting, and one of my main NPC is a sword dancer which happens to be a part of the heavily pirate-themed party 😀
So although she didn’t get a bandana or a peg leg I gave her a sandy base and covered it in water effect for a simple “sea shore” look. Shame that it doesn’t show on the photo.
And I finally got to paint red again, after avoiding it as a main color last week! The mini is still kind of WIP though, because now with the detailed picture I see a lot of spots that need touch-ups *sigh*
Dirk actually stayed true to the desert idea: 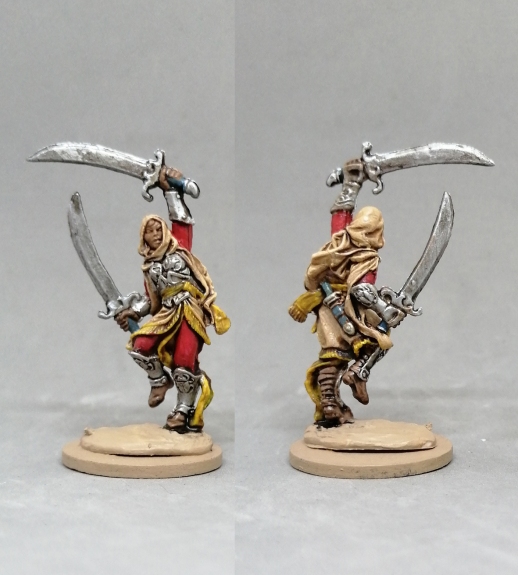 If you compare Dirk’s and my miniature you’ll find that the color schemes are kind of the inverted version of one another, and not even intentionally so.
I think I even prefer Dirk’s version a bit, because I like how the red works as a spot color and clearly separates the different areas of the mini. I am kind of a “red” person though, so I might be biased… Anyway, he used black liner/wash so the shadows are a bit stronger and the whole look is therefore more “dramatic” than mine – I prefer very subtle light brown washes.

Arjen used the chance to experiment a bit: 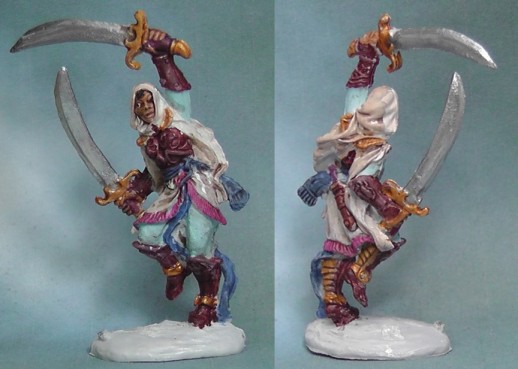 He wrote: “Another quick paint job. I had some difficulty sorting out all the sashes, shawls and whatnot. I tried to stay away from the more obvious color choices, so instead of the yellowish brown that works well with blue colors, I chose a reddish brown, which clashes slightly, but not too much. I finished with a quick brown wash to bring out all the detail, but had no time to do a highlight after that, so it is still a rough version. I decided on a whim to make the skirt rim bright pink-purple and I think it spices up the mini considerably. Apart from that, it is not my most inspired work.”
I know what you mean, I went the easy (lazy?) route to paint all the “flowing” cloth parts the same color. The maroon gives great contrast to the light base colors, and you’re right – the choice of pink is daring, but definitely extraordinary! 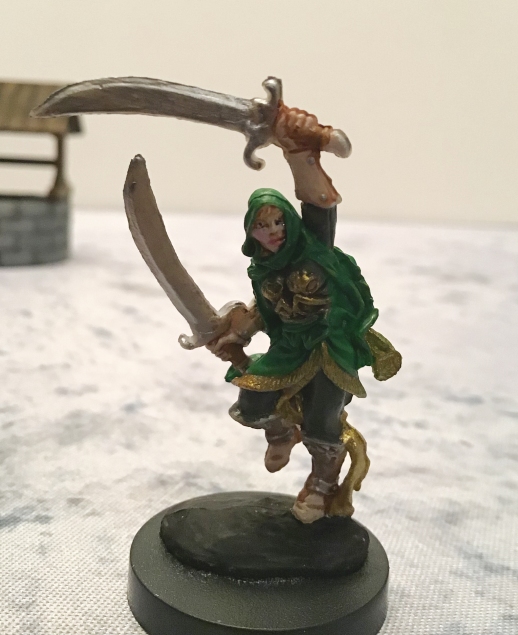 He didn’t comment on his choice of colors (yet), but it’s funny how the green makes me think immediately of elves/rangers. I mean, “two weapon fighting” is one of the specialisations D&D rangers can pick early on, so why not? Most people seem to associate Mi Sher with some kind of “1001 nights” style desert fighter, but temperate forests could of course be her home, too!
Michael also thought of (quite different) elves: 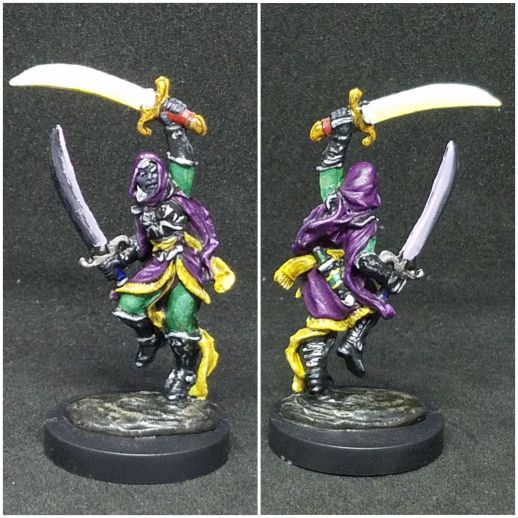 He said: “My version of Mi-Sher is attached. I originally had the idea of making the scimitars a magical pair of light and shadow, but I’m not sure when I decided to make this a gaudily-dressed drow. Maybe her fashion sense makes more sense in faerie lights in the Underdark. I’ll probably use this model as a Drizzt parody in one of my goofier games at some point.”
Wow, those are some nice strong colors! But strange as it may sound, I really like it! It reminds me of classic RPG illustrations, and in that regard, “goofy” sounds perfect 😉

Jim avoided the “desert theme” too: 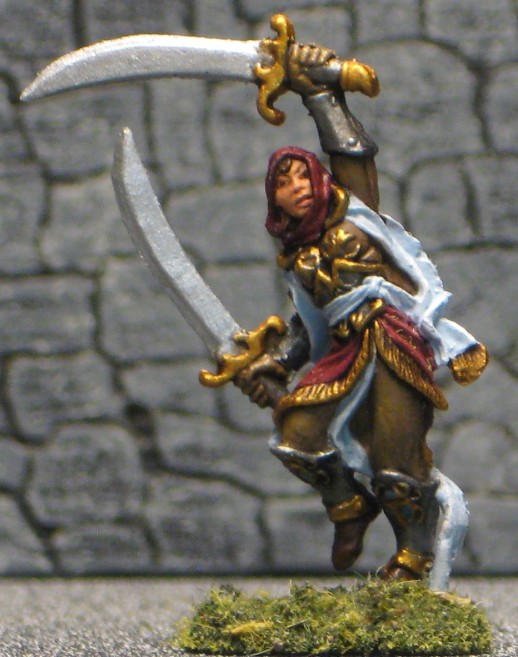 He wrote: “I definitely like this one better than the last! I started out thinking of deserts again, but ended up with dark red and light gray. The gray is Space Wolves Grey and is very blueish, more so than I had intended. I still need to go back and improve some areas, especially the scarfs/sashes. Overall, my mini had good detail with very few problems. I left the face a bit plain to imply a shadowy effect but I’m not sure it worked too well! In the end, I’m happy with this one and wouldn’t mind getting a metal copy.”
Funny how everyone thinks “desert” and still most minis end up somewhere else! I think that’s one of the things I like best about this project, not only to see the different outcomes but also getting to know how the planning started!
I don’t mind the blue-ish grey btw., I think it gives the whole mini a nice balance – maybe the silver blades could have a very light blue wash to tie the different elements together? 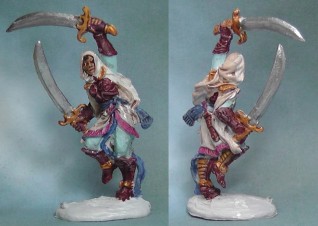 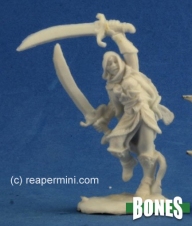 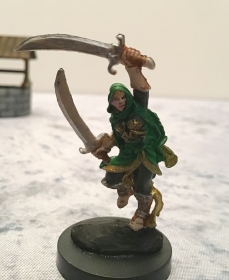 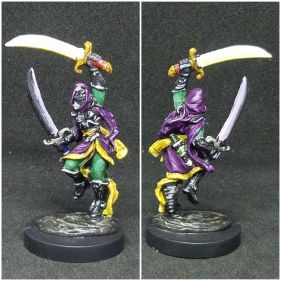 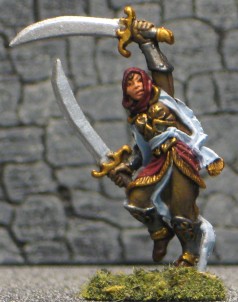 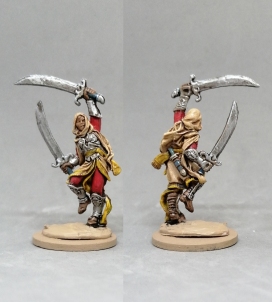 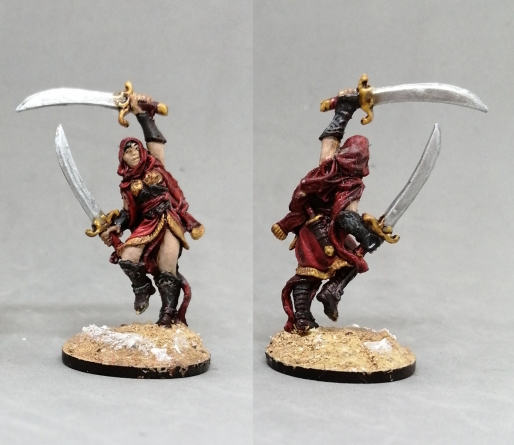 Want to participate in the next post? Email the pictures of your minis until Friday 09/27/19 to

I added some miniatures to the schedule now. We might still shuffle them around, do extras (like “Show me your project!”) or add more, just tell us what you think in the comments!

Since the miniatures don’t have separate pages in the shop yet, I’ll link to the “packages” they seem(ed) to sell.

Here is the link to Reaper’s page with all the core pieces, but it’s one and veeeery long picture so be prepared for some scrolling. On the other hand it has separate numbers for most of the pieces.

One thought on “Miniature Monday – Mi-Sher”