Sigurd is one of those “classic” vikings, long haired, bearded, even wearing one of those infamous horned helmets!

I’m having a busy week this time so I can’t write much, just so much: I like the sculpt – the helmet may be historically incorrect, but the rest of the gear and clothes have a quite authentic vibe to them. My mini had some mold lines but if I had checked for them it would have been easy enough to remove them as most of them are not in delicate areas.

When he started he wasn’t sure where the color scheme was going, so he started with browns and then added detail colors on a whim until he liked the result. Very strong colors, but it works for high fantasy, so – not bad for an experiment! The red was added as a focal color (and to add some gore, showing what sigurd does in his spare time). I like the color of the horns!

I just knew I wanted blue:

I started painting this guy weeks ago because I had some leftover blue-grey but of course I had to finish the rest on Sunday. Like, yesterday. Anyway, the blond beard is a nice contrast to the blue, the details worked well with washes, I’ll just pic out some of the rune details on the rim, and maybe cut off the horns, if I’m already at it. Other than that I consider this guy done. I chose a green rim just to avoid the go-to combination of yellow or white, trying new combinations won’t hurt.

He wrote: “I like this mini a lot: it has a nice pose and all kinds of details like the sort of writing on the rim of the clothes. I started painting this mini with cool, greyish colors and got the result on the left. I was disappointed as it was somehow dull. I decided that I would do a repaint and remembered someone warning me some time ago that you should stay away from grey colors and for best results should only use primary and secondary colors, and very little of those dulled down colors (like Citadel dryad bark, or paint set B from the Bones 4 kickstarter). I did my repaint using a slightly warmer color for the brown parts, no grey in the paint and I am much happier now. ”
Thanks for your insights on the painting progress/development, it’s always interesting
to read that kind of stuff!

Michael also went for blue, which seems to be a viking staple color: 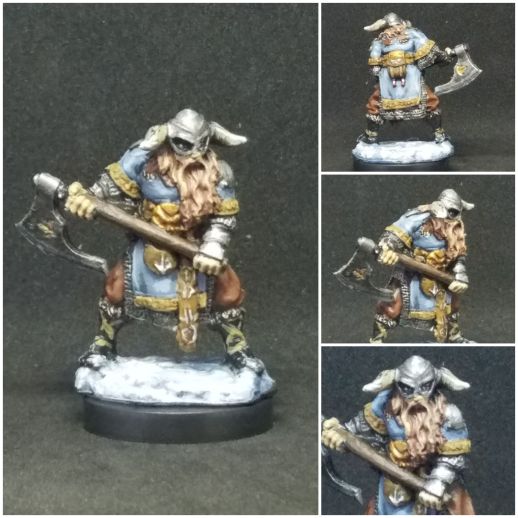 He wrote: ” I’m really happy with how this turned out, especially the beard. The detailing on the model held wash very well, I thought. ”
Is it the lighting, or is your Sigurd a redhead (beard)? Also a good combination with blue cloth!

Jim was inspired by fantasy art:

He wrote: “I like this mini with the possible exception of the horns on the helmet, but they’re not too excessive. I’m not sure why I decided on purple for the tunic but I like it more than I expected. The bright red beard clashes horribly but that fits the personality of the mini for me. As I painted, I slowly realized I was painting Kane from the works of Karl Edward Wagner as portrayed by Frank Frazetta (Google “Frazetta Dark Kingdom” or “Bloodstone”). Great stories if you’ve never read them.”
I’ll have to check them out, thanks for the info! And the beard is very red indeed!

Want to participate in the next post? Email the pictures of your minis until Friday 09/13/19 to

I added some miniatures to the schedule now. We might still shuffle them around, do extras (like “Show me your project!”) or add more, just tell us what you think in the comments!

Since the miniatures don’t have separate pages in the shop yet, I’ll link to the “packages” they seem(ed) to sell.

Here is the link to Reaper’s page with all the core pieces, but it’s one and veeeery long picture so be prepared for some scrolling. On the other hand it has separate numbers for most of the pieces.