First of all: No, you didn’t misread the schedule below the article. This summer is warm enough to re-bend Bonesium and everything (including us) slows down. So we didn’t settle for a Miniature Wednesday but went straight for next (this week). I hope we can still keep up the schedule for Durok next monday though, this dwarf looks like he doesn’t have much patience….

Anyway, Sir Conlan is a nice sculpt, with a good balance between detail and open areas which allow for blending and freehands. The face is tiny but not distorted, and I had close to no flashing and very little mould lines on mine.

My knight has something to hide:

AT first I wasn’t sure what to do with Sir Conlan as I normally neither play nor use (as NPC) knigt type characters much.Then I had the idea to paint him as a person from the background story of Dirk’s LARP-Character. The guy is the character’s father, member of a religious order who was, at the time, doing good in secret and hiding from the eyes of their greatest enemy.
So I envisioned Malcedorn wearing the dirty robes of a wanderer (blue/grey as a nod to the color of the divine dragon he follows) but under that he’d still wear armour and the order’s traditional red which would only show when he moves fast to help those in need.
In the spirit of that idea I also cut off the shield’s symbol, painted the order’s dragon symbol on it and then mostly painted that over again, because of course the dragon is still there, even if we can only guess its form.
(I realize most of this would be a bit impractical or too obvious in real life, but we’re talking high fantasy there, so I took some dramatic license). 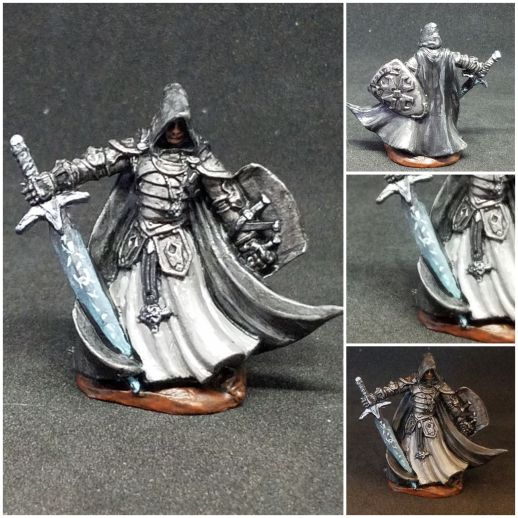 He wrote: “Here’s my version of Sir Conlan, which I painted up around two years ago, I think. This was an exercise in monochrome, to a degree, with very little color. The big emphasis is on the sword, which is meant to be magical/spectral; one of my pictures was taken with the light off to help show that paint popping. I painted this mini to be a character in one of my games, based a bit from art I found on Pinterest from the Bloodborne video game. In my game, the sword contains the soul of a paladin-type that took over the body of her enemy, locking his soul into the shield. When I saw this model on the list, I almost painted the clear version and the other model of the same character (hood down, sword held up) from Bones III, but ran out of time and energy. ”
Those experiments are always fun! As painters we can learn a lot about shadows and hues if we reduce the number of used colors to a minimum. I love the effect of color in an otherwise black-and-white area because it makes a great focal point! 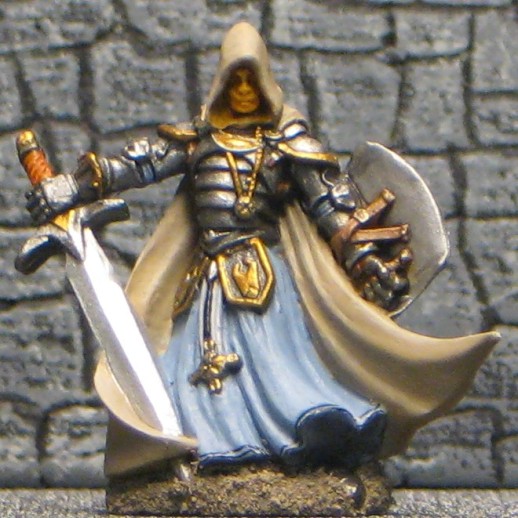 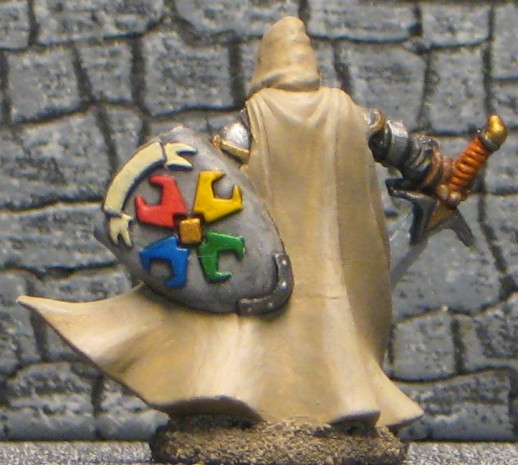 He wrote: “I really like the sharpness of the sculpt on this one. Only a few soft areas! Sir Conlan gives me a bit of a desert vibe, so he got a tan hood and cloak over a more Euro-style armor. I finally decided that he must be a Euro/Medieval knight serving his order as a temple guardian (templar) somewhere in a vast desert. The shield design, as on other Reaper Templars, is painted similar to an order of knighthood that I used in a campaign way, way back in D&D. I’m still not sure what to write on the banner but it will probably be something along the lines of Faith or Honor.”
The combination of tan and light blue looks great and the desert theme gives me a hint of Obi-Wan, now that I think about it 😉 And although the prismatic colors on the shield seem quite strong they work nicely to make the back view interesting. 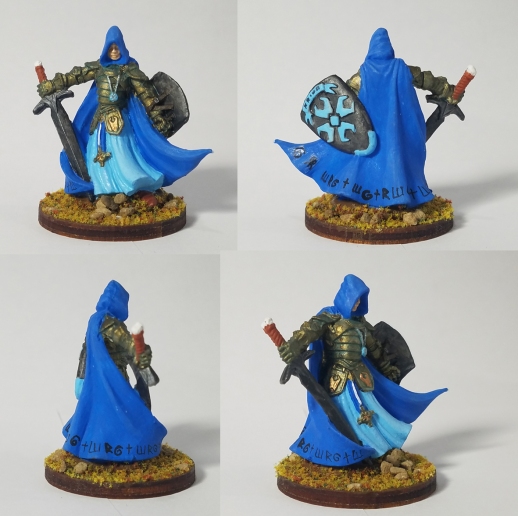 He said “Here’s my sir Conlan. I added runes for a game I used to play. Sorry for not being more active – my job has been crazy!”
Believe me, I know how it goes, and only the thought that there actually might be people enjoying this blog makes me (try to) keep up the schedule. Having all those nice painted minis and a little creative outlet every other week is cool, but it’s still hard keep up sometimes.
Anyway, I glad you sent in your mini this time, and I really like that radiant blue you were using. The muted color of the armour makes the other colors seem even more intense! On a side note – Interesting how everyone this time thought that Sir Conlan needed some kind of blue!

Arjen, on the other hand, worked with subtle blues:

He wrote: “An unfinished Conlan with no pretty face. I had difficulty with my camera this time: it does some sort of color adjustment which detects a lot of blue and then automatically tones it down. My light blue skirt became white, my blue-silver armor became just plain silver and my extremely bright blue cloak became just bright blue. Sigh. It makes the mini less interesting.”
I think many cameras do that to reduce the blue in bright daylight, maybe you can change the setting to “indoor” or “night” the next time it happens, or even try and trick the sensors by using different backgrounds, e.g. something reddish?
Anyway, the idea is cool, I think I read about that in some Golden Demon painting workshop – mixing a hint of the same color into every paint you use on a mini makes for a well rounded composition, I think in the article they used blue, neutral grey or reddish brown respectively. 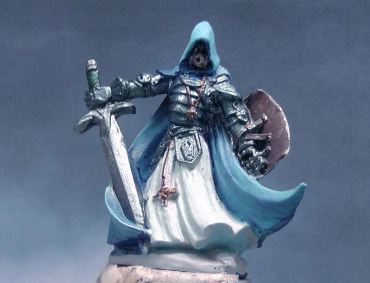 Want to participate in the next post? Email the pictures of your minis until Friday 07/05/19 to