Once again, we welcome the “Ghosts of Christmas Past”… Or, rather, the ghosts of Mini Mondays past. Let’s see what our painters scratched off their respective painting lists this time!

Since “birthday season” has started in Dirk’s familiy (mine will take over next moth) we didn’t manage to catch up on anything besides gossip and new recipes. But although our half- or unpainted minis will continue haunting our painting stations, fortunately some of our dear readers sent in their projects to fill that gap!
Arjen painted this week’s “poster ghost” and also a special guest freshly out of the box!

He wrote: “For catch up I painted the conjuror Aaron. Monday miniature featured this mini a year ago (May 2018) but I skipped it because it did not look interesting. When I found out it had these amazing faces in the fire (that I missed completely) I put it back on my to do list. So, to complement the yellow fire and grey smoke that others painted, I gave mine this magic green fire. Then I chose a robe color that contrasted well.”
My god, you are right, May 1018 is already a whole year ago. Time flies. But Magical fire does, too, and your Aaron looks just awesome! The ghostly faces look very cool, and the contrasting color scheme was a very good choice – you’re getting really comfortable in the pink/purple range, right?

Arjen said: “My Bones 4 arrived this week! So to celebrate I painted a mini from one of the expansions, the troglodyte. My camera had difficulty capturing the color, which is slightly more greyish. I have a new computer, but no painting software on it yet, so no nice combined picture* or color adjustment. Pictures from the side and rear, as I think these are the interesting parts of my paintjob, with the spots and brown spine. The initial idea for the paint scheme was based on the 3.5 monster manual, though the end result is very different as the mini looks very different and I let it evolve as I painted.”
First of all – congrats on your Bones finally arriving! Your news give me hope and envy at the same time because that means our shipment could also arrive soon-ish. (We were really biting our nails and hoping that our Bones would arrive before any final Brexit-drama started, but since they now postponed the whole mess into autumn we *should* be safe on this front at least.)

I like what you did with the troglodyte, the gradient mottling works great to convey reptilian (or amphibean) skin and the pale green contrasts nicely with it. I’m curious why you chose this mini to paint first – did it just catch your eye or do you have sinister plans for using it sometime soon?
(* I combined the two pics for you, but left the colors, because only you know how they look in Real Life.)

Jim sent us a fierce lady for mother’s day:

He wrote: “I almost didn’t do a mini this time but did a quick job on Cassiata from a while back. I’m still not entirely sold on the style of the mini, but I like her more now that I’ve painted her. Not much highlighting or shading but the overall effect is still decent.”

I know what you mean (both with “almost didn’t manage” and “weird style”), but I’m still glad you sent her in – your take on her as some kind of high fantasy “forest-warden” or bright heroine is interesting, considering the model was sculpted as an anti-paladin of some sort, if I recall correctly. I think with her hair, her stance and her “plate mail high heels” Cassiata could absolutely star in some over-the-top fantasy flick from the 80s, right? I like what you did with the gemstone, did you use gloss varnish on it?

Michael unleashed a horde of monsters: 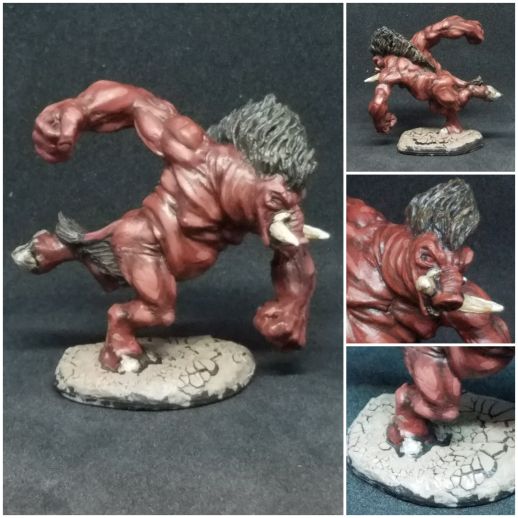 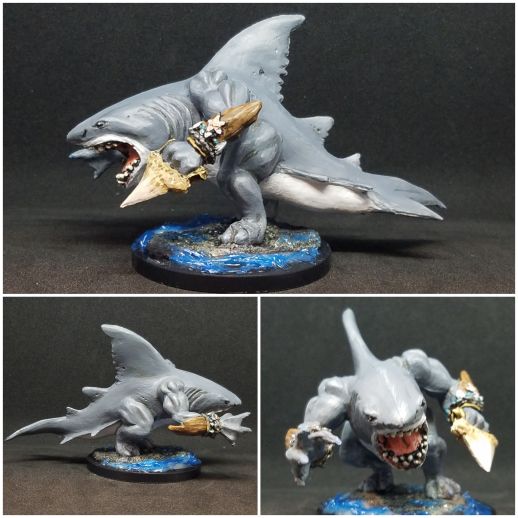 He said: “For catch-up week, I’ve included a few more werebeasts that I finished with the wolf and croc back in January – the wereboar, wereshark, and the Avatar of Rage, who is basically a were-hippo. As I was going through my phone images, I was reminded of how many models I completed in December and January, when I wasn’t teaching. Well, my semester is nearly over, so I’m hoping for another burst of productivity!”
Well, we obviously do, too, because we’re always happy about more contributions for this page 😉
Thanks for sending in the were-creatures, I like the models a lot, and the were-hippo is definitely my favorite! How much time did you spend on this one? All the small details are greatly done, especially the scarring and that pendant, and is that blood on the bandaged hands/paws? “Avatar of Rage” indeed!
(He also included the finished Skara, and I’ll upate the last article asap.)
He added: “I did (finally!) get my Bones 4 Kickstarter. It’s… a lot!!! And of course, I’ve got the remnants of all the other ones and everything else I’ve purchased from multiple games. I’m still planning on taking on some of the big, big models this summer, so wish me luck!”
Much luck for that, do you care t share which ones you are thinking of? Maybe it sparks motivation in all of us! 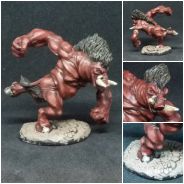 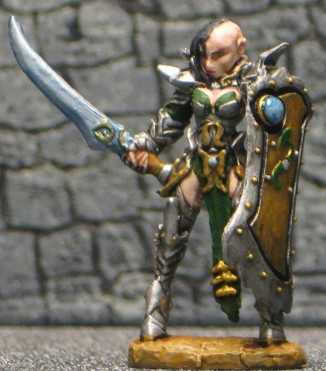 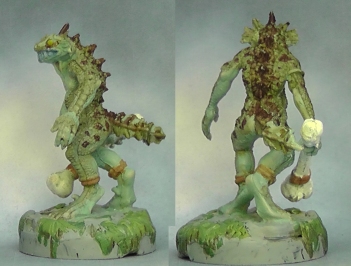 Want to participate in the next post? Email the pictures of your minis until Friday 05/24/19 to