Some unions are infernal, and their result even more: This week we have a look at a Skoli, Reaper’s version of a tiefling or maybe half-demon.

Note: Since the last weeks were quite busy (my sister had her baby! Yay!) I’ll have to keep this article a bit shorter, but I wanted to show all our painting efforts nevertheless.

I gave my Skara an extra feature:

Since I’ll be using the Bones 3 Sophie for a human conversion, I had her wings left over to play with and decided to give them to Skara instead.
The conversion was plain and easy, I simply cut a hole in her back to fit in the connecting piece of the wings, but I’m very happy with the result – the wings look as if they were made for her. I’ll have to adjust the base though, because the tips of the wings are scratching the floor right now.
For the colors I went the “Hellboy” route, because a) I like red and b) it always looks very hellish. I decided that her strange armour would cover the whole leg besides the front part of the feet – it’s a bit “manga style weird” but for me that fits the overall feel of the mini.
The model is at the “base color and partial wash” state right now, and it still needs cleanup and a base, but since I have my hands full atm she’ll stay that way until we actually need her for something, maybe an RPG encounter of some kind. Still, I like her.

He wrote: “I’m sending in another quick photo of a work in progress. Skara is most of the way done, but I need to finish detailing the accessories and the base. I’ll send in the finished model for an update later. As you can see, though, I have no idea what a Skoli is, so I went Tiefling. I also replaced the boring looking sword in her left hand with a piece from one of the armories that came in KS3.
Speaking of Kickstarter, I’m still waiting for my KS4 to ship. I ordered all three items that were in the final delayed container, so I’m still (impatiently) waiting for a shipping notice. ”

Great idea, swapping the weapon! The sword is indeed very generic, your curved dagger works well with her posture and silhouette!
I’m not sure if there is indeed a definition of a Skoli, I took it as some stand-in for Tieflings, half-demons, half-devils etc.

Arjen was weirded out by the design:

He wrote: “I did not like this mini. After some soul searching I found that the thing I liked least was the ridiculous armor on the left shoulder (so much armor there and so little above her heart: ridiculous), so it had to go. After that I decided this was a good mini to experiment upon. I wanted her to have black clothing with a purple sheen. I did not completely succeed, but I got somewhere in the vicinity of what I was aiming for. Her eyes I tried to make a fierce blue, but there I failed. Also this was my first attempt at blue hair and it looks okay. For the weapon shaft I mixed a bit of purple into the brown so it would not clash and that worked very well. I think the overall result is passable, and certainly looks different from all the other stuff I painted so far.”

I totally get what you mean, the armour design is quite exaggerated, it reminded me of a comic-like style (e.g manga), although for that the weapons should have been larger too, I suppose… Anyway, with this bulging bust and bare feet (in plate armour?) one has to embrace the cosplay feel, I guess, or convert a bit, like you did. It looks so much more normal that way (as far as normal goes for a half-fiend, anyway.) Did you also smooth down the chest area or is it just covered up by painting?
I like the combination of red and purple, the contrasting hair, and the color gradient on clothes and armour looks good too! 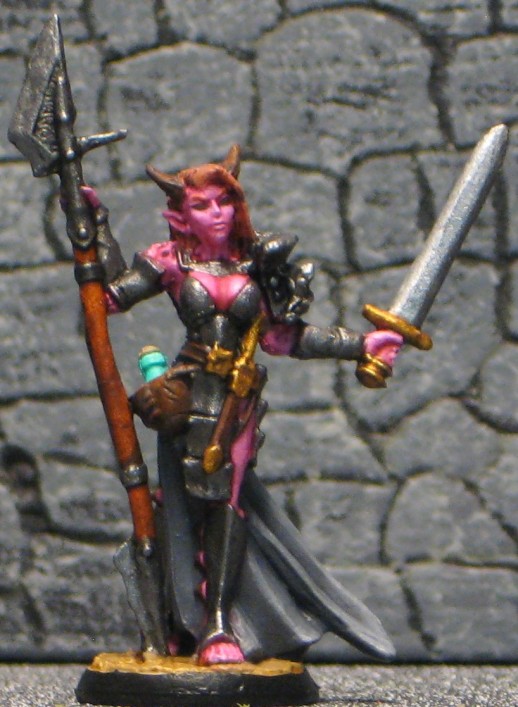 He wrote: “I couldn’t get inspired by S’kara for some reason but I still think she’s an interesting miniature. Much of the detail is nice but some of the armor was a little confusing. The skin came out a bit too pink and I messed up the hair but overall I’m pleased with the result. I still don’t know what a Skoli is, though!”

Great paintjob, Jim, very clean, and the pink skin looks quite unnatural (which I definitely like in this kind of character). I’m surprised how well the reddish brown hair and the skin go together, and the turquise bottle is a nice eye-catcher – do you repeat the color somewhere else on the mini? I once read that helps to balance strong contrasts.
I can see that you painted those leg spikes as skin/organic – I would never have thought of this, but it’s not too far-fetched for a tiefling to have thorns and spikes here and there, quite right! Eye for the details, as always 😉
The dark armour looks very cool too, how did you achive that effectß Did you start grey and washed/highlighted, or what is your approach? I always find black a bit difficult to paint, especially highlight-wise. 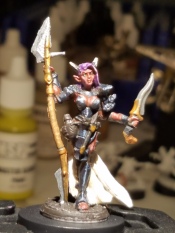 05/13/19 Bones – Catch-Up Monday (Your choice of Bones I-III!) Have a look at the vast range of minis here on the blog and show us something you painted later!

Want to participate in the next post? Email the pictures of your minis until Friday 05/10/19 to

One thought on “Skara, Female Skoli”