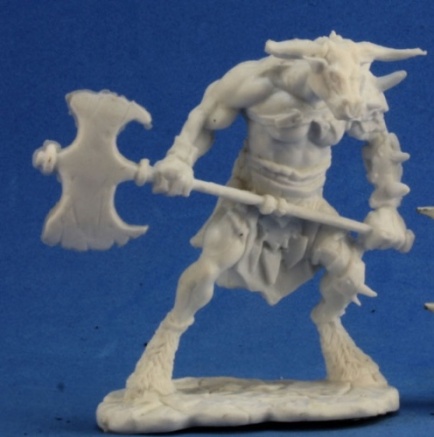 Can you hear the stomping of heavy hooves somewhere deep within the labyrinth? Somewhere, the Minotaur is waiting… (posting by Antonia)

I love minotaurs and remember the days when minotaur minatures were kind of rare and very expensive because they needed so much metal. Fortunately, since the dawn of plastic and even bonesium I can get more of those beasties than I ever can paint (Disclaimer: Having a small child, that means “more than a handful” at the moment, but still…).
This miniature is nice overall, a rather slim specimen compared to many of the bulky wargaming minotaurs. A lot of open skin/fur surfaces to play with shading, a bit muddled detail in the armour part, but the muscles and general anatomy look fine.
My minotaur got a tech makeover: 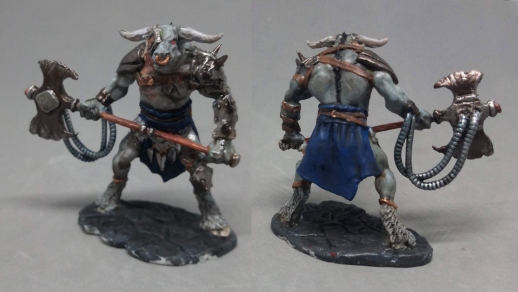 When I saw the mini, I somehow thought of it as a cybered thug, like a character from the Shadowrun RPG, so I added a bit of scar tissue, plating and rolled up some wires out of green stuff. I imagine this guy (or gal? Who knows if there is an udder under that loincloth?) experienced some kind of heavy injury and needed cyberware to go on smashing opponents 🙂
I painted the fur wet-in-wet (I like that for smooth transitions) and only added metal and leather – in hindsight I should probably have chosen darker metal though. Later on I plan to add some technical markings like warning stripes or corporation logos on it to add to the cybertech look.

Arjen got his inspiration by a rare cattle breed:

He wrote: “I will be busy next week so I am early again. All the time saved on my very quick gargoyle was poured into this one: finally a mini I spend some time on and I think it shows. As inspiration I used a Dutch race of cow called Blaarkop (“blisterhead”). They have kind of spooky heads, most are black and white, but I went for the rare red and white variant. The eyes are not as fiercely red as I wanted. Maybe I should have used gore (blood) red instead of normal red. Apart from that everything is pretty much the way I planned it.”
Awesome color scheme! So in the Netherlands you have cattle with halloween (or Khorne?)-style skull-shaped head markings and deep red fur? Wow! It indeed looks really scary, even demonic, well done!
Michael took the miniature’s name literally: 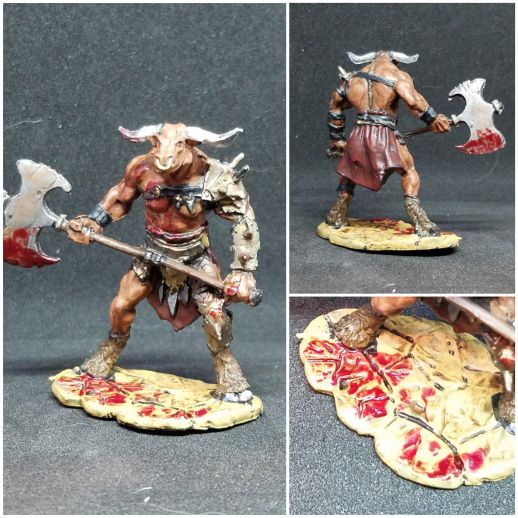 Nice bloodshed, really! As you might have guessed from some of my previous paintjobs I do like to use blood and blood effects for dramatic emphasis 😉
Which brand did you use? Are you happy with the result?
I also like the warm browns of fur and loincloth, they harmonize well with each other – and the blood, of course 😀
Jim sent us a whole herd:

He wrote: “This week is a case of buy one minotaur, get three free! I had been wanting to catch up on Bronzeheart and these two beastmen and this was the perfect opportunity. They are all painted similarly but not identically, to give them a common theme look. I prefer Bloodhoof over Bronzeheart stylistically, but I think both painted up fine. The beastmen were fun and easy even if I didn’t do much cleanup on them before starting!”
Very cool group picture, and as it fits for the feature of this article I think Bloodhoof looks best. Like so often you captured a classic “monster manual” look which shows off the muscles really well.

Thanks for all the great participation, since this is the last article for this year, we already wish you all a wonderful festive season and a good start into the year 2019! I’m looking forward to seeing all the new miniature projects and if you have ideas and suggestions for minis to paint or articles to write, just send them in or comment! 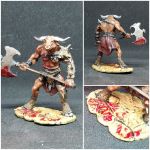 Want to participate in the next post? Email the pictures of your minis until Friday 01/04/19 to