Dogs in miniature games are mostly companions, sometimes beasts of war and even rarer monsters. This week we’ll have a look at the bones version of the latter two.

Concerning the details and overall quality I liked the minis this times, especially the war dog has a lot of nice and realistic tidbits. On the negative side my wardog had very heavy flashing/mould lines right across the head, torso and legs, which were hard to get rid of completely, especially on the face. Dirk’s version was fine, though – how were your experiences with this?

(And sorry for our less-than-stellar pics. We had only seconds to snap them while fending off the toddler so I’m glad we even got some…)

I painted some rather colorful dogs:

For my war dog I chose a white/spotted fur, I like to paint those random variations. The base color is a mix of white and ivory with pale pink for the eye area and toenails, like a light colored animal would probably have. The breast plate bears the crest of Dirk’s Rogue Trader character’s dynasty (maybe as a joke, or maybe he can use the mini as his character’s pet and pretend it’s a robot or servitor or cloned beast or whatever, being part of the grimdark 40k background, who knows?).
My Foo Dog (which simply means “guardian dog”, the lore and RPGs there seem to exist a lot of “foo animals”) was painted with a slight nod towards the brightly painted temple statues e.g. in southeast asia which show demons and masks with large tusks and glaring, bulgy eyes. Since we still don’t have much (ar any) hobby time atm I only used two main colors, red and gold, plus some white and pink for the details.
This way it looks more like a statue, I’m thinking about adding some story to the base, like bloody footsteps and a gnawed piece of bone on the ground just below the mouth… something like this 😀 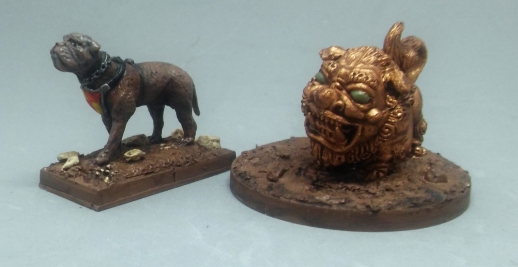 Since he plans to use the War Dog for one of his tabletop armies (Classic Warhammer Bretonnians, I think) he built a small cavalry base for the dog so it can fit in the ranks better. Colorwise he used dark browns for a muddy, battlefield-like appearance. His painted breastplate gave me the idea for mine (credit where it is due!) and I love hove the red and yellow add a bright spot of color to the otherwise monochrome paintjob.

He wasn’t sure if he wanted the Foo Dog to be an object or a living being, so he decided to go the “brass bull” route (metallic and maybe animated statue), which also gave him the chance to paint the mini relatively fast, with a golden base coat and several washes of shade to dull down the bright gold and show the details. I like the green (supoosed to be jade) eyes, which leave some kind of hint that this is more thank just a sculpture. Well done!

Michael did some research for a mastiff and “realistic magical beast”: 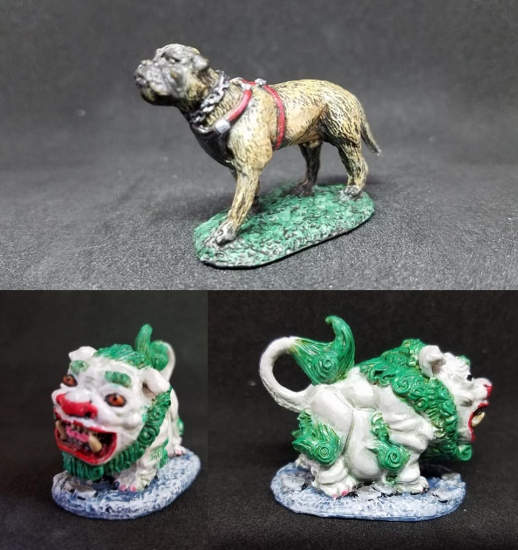 He wrote: “I painted the War Dog as a fairly typical mastiff, using an image I found online. It was quick and simple (mostly drybrushing), but I like the results. For the Foo Dog, after a little research, I decided to make it a Tibetan snow lion. I think I did as well a job at matching traditional depictions as I could, but it might be a little too clown-like in the face. To make it more magical in appearance, I finished with a glossy top coat rather than matte.”
Great idea with the research – in which cultural tradition did you find that “snow lion”? Very unusual color scheme, and you might be right when you say the face looks clown-ish – in the most horrible way! I recently saw “IT” (new version) and whichever character of mine faced your Foo Dog would probably be very scared by those orange eyes…!
The war dog looks good too, the drybrushing works well for a dark, realistically grizzled effect.

Jim also went for gold (or bronze, to be precise):

He said “I decided to paint the Foo Dog as an animated bronze statue or golem instead of a magical, yet living creature. I may have been trying to save a little time originally, but I’m pleased with the result. I think it actually looks a little scary! The War Dog is just a big mastiff. It came out well, I just need to add a little blood and dirt to the chest armor.”
I like the bronze version a lot, the silver makes eyes and teeth very prominent! The war dog looks great, maybe a bit more purebred than Michael’s, with clean colors and well defined markings. This way it could be used as a Noble’s companion (sitting next to a High Chair or fireplace), for a more “battle-worn” look a bit dirt and grime will help, as you mentioned.

Arjen had more fun than anticipated: 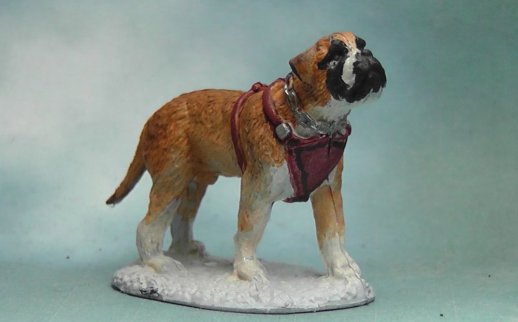 He wrote that he finished the war dog with a quick paintjob, and that he wasn’t too inspired at first but then came up with the idea to make the dog a boxer and enjyoed painting the facial markings. With much success, I’d say, they define the face and give it a lot of character, I love that, together with the color transition from brown back to white belly. What did you use, drybrushing, layering, or maybe washes? I use mostly wetblending, for example, which aloows for smooth transitions but with the downside of making later corrections harder to work in.
And some other interesting thought, Arjen wrote “A nice sculpt, as it is generic enough so you can make different dogs out of it just by painting it differently.” Very important for a miniature, especially a “basic” one like a common dog, cat or bird (see the companion animals, for example) to allow a big variety of uses. 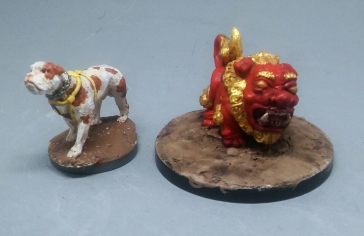 Want to participate in the next post? Email the pictures of your minis until Friday 07/06/18 to