“I want to be under the sea…” – Monday Miniature: Kelpies 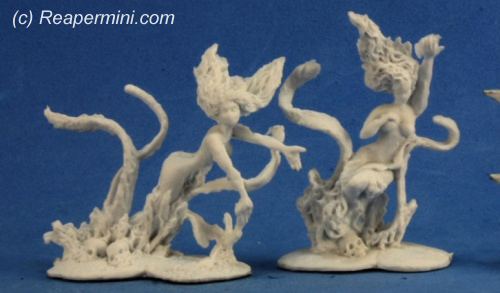 Mermaids, Sirens, or what else names you give them, the enchanting beauties from beneath the waves can be found in many stories throughout history. Sometimes they are benevolent, sometimes they’re not. Let’s find out what we have here…

The minis this time were very inspiring. They are not as detailed as other miniatures, but all our painters told us that they experimented with their painting styles to get the right feeling for these creatures, or the “underwater effect”. Some used awesome bases, some used special painting technics or colours, and some went even beyond that.

As our little “master of the household” is still in need of a lot care (now he is mobile, crawling and even trying to stand up…!), I went up to the challenge to paint this minis in an hour. I’m very content with the results…

I wanted to use as few colours as possible and stuck to greens and blues to create an “underwater-feeling”. Also the kelpies should look like they could hide in their environment. I liked the minis despite the lack of detail and am already planning how to use them in a future roleplay session…

Arjen had more fun painting these minis than he had anticipated.

He said he experimented a little bit and got sort of the effect he desired. The use of green colours with a little brown and yellow is a good combination for this environment, and I like how the kelpies merge with their surroundings. Very good! Really an impressive overall feeling.

Jim hadn’t as much time for the Kelpies as they deserved, but the result looks great.

He was trying for a slightly out of focus/underwater effect. I like the combination of warm and cold colors, which give a very organic impression – plus you absolutely nailed the colors of the seaweed! We live at the coast of the Baltic Sea and we have exactly those kinds of brown and green seaweeds that get washed on the shore. No kelpies until now, but who knows?

William kept to an analogue blue-green scheme with a little bit of yellow in the eyes and as highlighting for the green parts. He tried some new techniques, starting with an airbrushed base coat and shading with wet-blending. Well done! This kelpies also blend in well with their natural habitat. William even used blue on the ocean floor to give the underwater-feeling, which I didn’t dare to try. But as I see it now perhaps I give my Kelpies another hour of painting…

Kylie also enjoyed painting the kelpies, as it gave her the opportunity to play with rarely used colours. 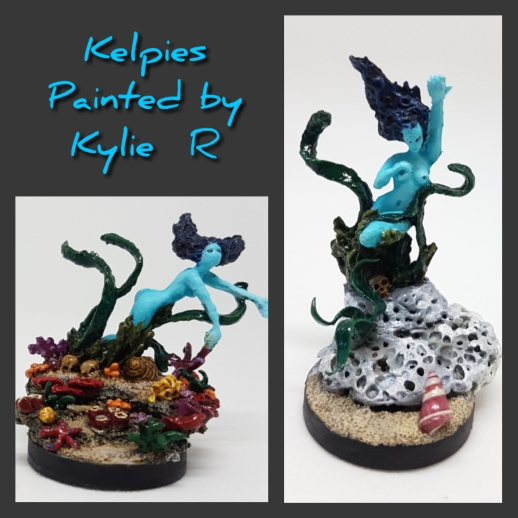 Because of the lack of details, Kylie decided to add some interesting bases, and they are really awesome! It was her first use of green stuff, but I think she mastered it! Are all the plants on the left base sculpted? And had you real live plants as reference or did you do it free style?

Antonia went a little bit further. As she noticed that the Kelpies don’t have mouths, she wondered: How would they eat? Or are they real creatures at all?

This is a really big monster living under the sea bed, and the kelpies are just “puppets” surrounded by the tentacle tongues of the monster, bait to lure someone in, like the light bulb of an anglerfish. She even made them “glow”, although it’s not so visible on the pictures.

The monster’s beak was scratch build on a basic construction of aluminium foil, body filler and milliput. In the last minute she added another creature, one of the deep sea fish from Reaper’s “Familiar Pack VII” (atm available only in metal, but who knows? Bones IV is already in planning…!) She is not sure if the fish is going to be prey, maybe it’s more of a mutualistic realtionship where the fish cleans up bits and pieces of the last prey, so only the bones are left. 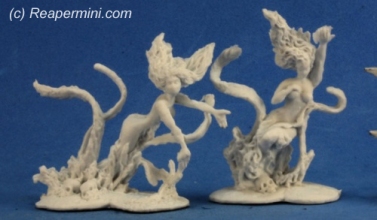 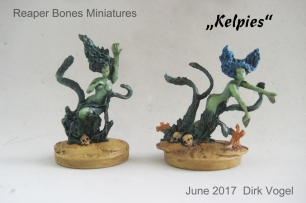 Want to participate in the next post? Email the pictures of your minis until Friday 06/16/17 to

–> Attention: The submission date for photos is about three days before publishing date, to give us a bit of time to actually write about your pictures

You can of course send in pics later, but to take out a bit of the stress (most pics arrive here rather last minute) please consider the three day deadline. Later pics will show up in an update and won’t get as much spotlight, I suppose

3 thoughts on ““I want to be under the sea…” – Monday Miniature: Kelpies”