I once saw an old (veeery old) movie of dangerous killer frogs from the swamps that was filmed with real frogs. In every scene with this monsters you just could see fat frogs sitting around and … croaking! You wouldn’t believe these pets could hurt anybody! But the buddies (or froggies) our painters dealt with aren’t so nice at all – look on….

Before we present the froggy warriors, there is a Kickstarter which could be interesting to miniature painters, and since Dave used to write about interesting projects in this blog before, I thought we could mention it:

Mantic, a UK based miniatures manufacturer, is kickstarting a range of hard plastic terrain pieces. This is not exactly a small company needing help, but still there could be some interesting stuff for either wargaming (fences, walls etc…), basing/dioramas (furniture, treasure pieces, tool racks…) or RPG use, like real shelves for the wizard’s players are about to plunder. It runs until May 15th 00:59 CST, i.e. 5 days from now.

Although we didn’t mange to finish the frogs completely, at least we did some work on them – I have to say I was quite surprised how many details the minis had. The weapons were kind of bendy, but that was in fact useful because we could just bend the arms away to paint underneath. The detachable skull of the boss frog, which we painted as an extra, was also a nice gimmick.

My squogs are still a WIP. 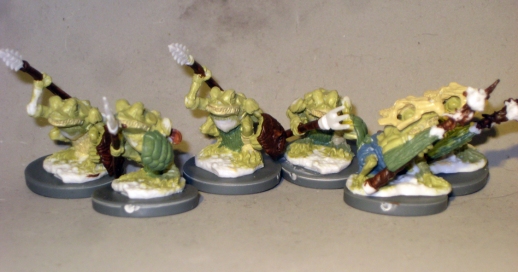 As there were so many items from the sea on these minis (i.e. starfishes, shells as armor) I decided to paint them as sea-living kuo-toa (from D&D). I’m still undecided how to paint the metal parts as iron would rust in the sea… perhaps gold or coral as spear tips?

I am really thrilled by her color choice of poison dart frogs! It was an elaborate process with different layers – first the bright colors and then the stripes and dots – but I think the result shows it was worth the trouble.

Arjen also send in some WIP-frogs. 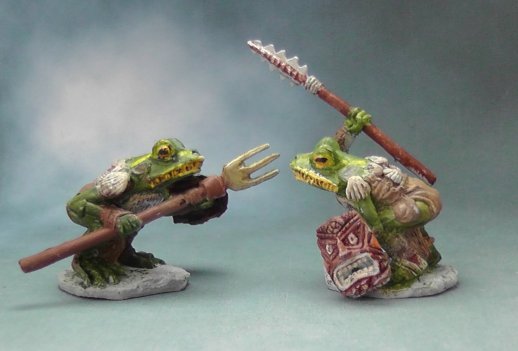 These will be some kind of striped frogs, as the work-so-far shows, very nice. Did you had a real life pattern as a guideline, or did you just followed your imagination? I like the horizontal pupils you painted, just like real frogs!

Jim send in some reinforcements…

The above picture shows Jim’s squog warriors in detail. He painted them as leopard frogs, aiming for a more temperate climate. I especially like the details on the left shield, the painted eyes make a frightening look!

The other picture shows the whole frog invasion! Nice minis, where are they from?

Want to participate in the next post? Email the pictures of your minis until Friday 05/19/17 to

–> Attention: The submission date for photos is about three days before publishing date, to give us a bit of time to actually write about your pictures

You can of course send in pics later, but to take out a bit of the stress (most pics arrive here rather last minute) please consider the three day deadline. Later pics will show up in an update and won’t get as much spotlight, I suppose