Miniature Monday – Show me your Project

Here we go – you sent us pictures of the projects you did in the meantime, and it was quite a lot!

Since we, of course! have not much time for writing, I’ll just show you all the pictures and give just a little comment, and maybe you can answer questions or give extra infos in the comments?

Dirk took some photos of his ships and planets for the “Star Trek – Attack Wing” tabletop game. 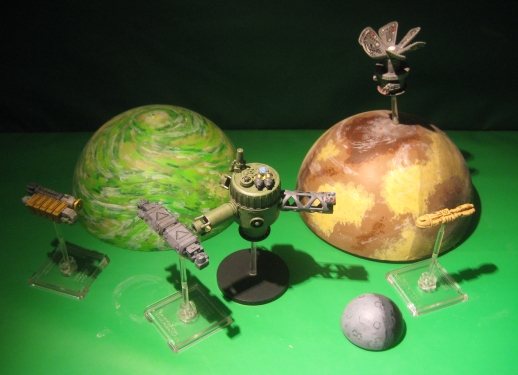 Besides of looking quite great, the ships are also – believe it or not – completely scratch built from bits, toys and, mostly, “garbage”  😀  Incredible how much the right paint job can do. Can you figure out the components?

Tina sent us pics of her painted “Malifaux” warband:

I don’t know much about the gaming system, but as far as I know you have small groups of characters and followers, so you can dedicate more time to painting each of them.

William painted minis for use with his Heroquest boardgame plus a partially converted dwarf pirate:

The picture also shows his progress as a painter: The dwarf and the wizard are new paintjobs while barbarian and elf were painted some time ago.

The pirate dwarf is a wonderful model, especially this version, in which William swapped the gun with a bottle and did a really great job with painting the glassy effect! Wow!

Kylie finished some projects and started others anew  🙂

Inspired by previous Mini Mondays Kylie wanted to paint more animal companions/familiars, so she did a great fox and parrot – cool idea, painting the bird as tropical opens a whole new world of possibilities!

The bat swarm was done for her husband’s wargame army (Age of Sigmar) and the flesh golem, which was obviously (and patiently 😉  ) waiting on a “to-do” pile, finally got a structured base  In the end she told us she painted all this in a weekly local game store painting group, a great way to keep up the painting spirit – just like some weekly (or two weekly) blog posting  😉

Jim also had a lot of minis done:

I can see some of the minis we featured on this blog (the symbol on the red/blue shield looks very good, is it a freehand or a delicate decal?) , and also cars and tanks – where are they for, Jim? Some kind of tabletop strategy game? And the red car – it looks quite “Mad Max” to me  😀

This piece is a very detailed (and seemingly rather expensive) resin mini by Heresy Miniatures. Arjen said it was a real joy to paint due to the fine detail of fur and face. I agree with him that this guy is an unusual take on the subject and, I may quote, “he looks like he would give the abominable snowman nightmares”. 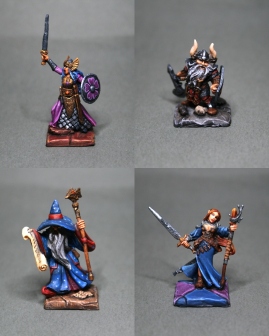 Want to participate in the next post? Email the pictures of your minis until 03/10/17 to

This way you’ll have two weeks/one weekend to paint, and we have one weekend to write (which is the only time of the week where we have some ope minutes).

You can of course send in pics later, but to take out a bit of the stress (most pics arrive here rather last minute) please consider the three day deadline. Later pics will show up in an update and won’t get as much spotlight, I suppose  😉

13 thoughts on “Miniature Monday – Show me your Project”