This week, we had a great variety of animals to paint, which was quite fun for us to do, and gives us a proper zoo to display here  🙂

Since we had the chance to paint many variations of animals (the sculpts allow for different species of felines, e.g.) Dirk & I did some brainstorming first to decide which animals we would represent.

All except one are (more or less) “real” species, but als old D&D GMs we had to include at least one “magical” variant:

Here we have (from left to right):

For the second round some exotic patterns:

Jim managed to paint all five minis too:

Very classic choice of colors, I really like the shading of the wolf and the pattern of the hawks wings! Did you put some flocking on the bird’s base? The close-up is a good way to show the details, but unfortunately the bases in the background are obscured a bit.

About the species: I think painting the feline as a cougar is spot on for the cat’s built, and it fits in the variety of Northern American animals.

Did you like one of the minis best? Which was a pain to paint?

After some time off, I’m happy to see one of this site’s long-time-contributor again – Kylie! She sent a picture of her beautifully painted bear: 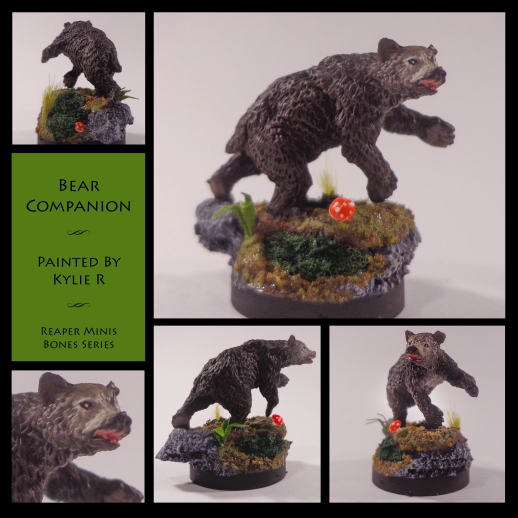 Great work on all the details – you even got the inside of the mouth and the tiny eyes ! And as always, a wonderful base! I love base-fu, and am a bit sad that we didn’t manage to do proper scenic bases  for all the animals.

Anyway, glad to have you back! And if you have other minis to show here, feel free to send them in, we can update any time  🙂

Arjen painted the wolverine and the bird of prey intending to use them as summoned animals, e.g. for a druid in a game of D&D: 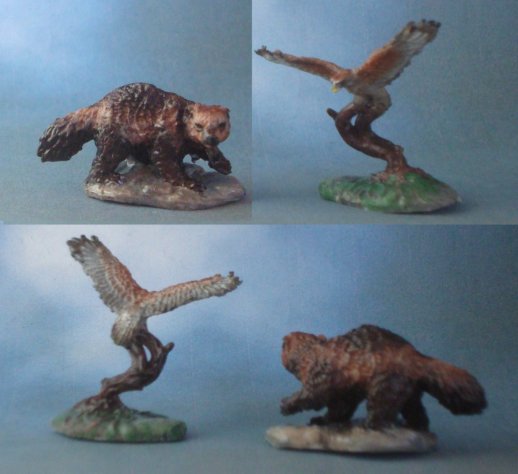 I love the subtle color variation on the feathers and fur, great work with the hawk’s wings!  The lighter brown in the wolverines face really shows the details in the tiny face, well donne! Looks really natural  🙂

You wrote you had some lighting problems due to the days becoming shorter, and I understand too well! I also had to take pics only with artificial light, and I definitely missed the sun  😛 If you find a working setup, please tell us, we’ll be thankful  🙂

Overall, what did everyone think of the minis? I like how many different species can be portrayed, perhaps not all of them biologically accurate  😉  but still.

Kylie sent in a WIP of her snow leopard 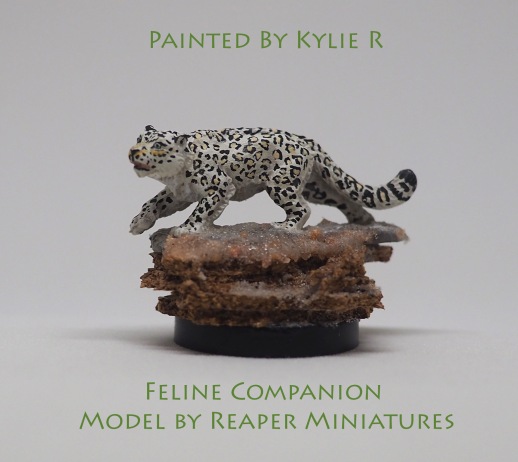 Snow leopard! What an awesome idea, I wondered the whole time which type of feline could be portrayed,  with a stocky build and a long bushy tail – and now I see not just cougar, but also snow leopard are a perfect fit  🙂

Kylie wrote she is not completely happy with some details which she would do different next time, but to us this cat still looks awesome, great use of secondary spot coloring in the middle, that’s something I forgot about the Jaguar, it always adds a deeper level of realism.

You said you’re still in the process of basing the mini – what did you use for the ice? Some kind of water effect or perhaps just clear acrylic paste? And the the base itself – is that wood? Cardboard? I always like to learn new tricks on basing  😉 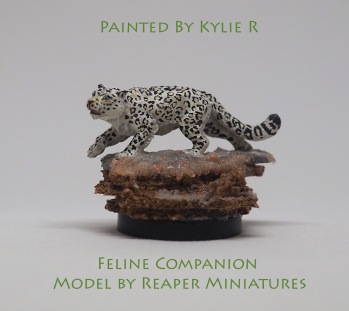 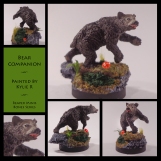 A very strange creature for sure. Could be a stone beas, a plant monstert or some exotic alien perhaps?

Want to participate in next week’s post? Email the pictures of your minis until 10/23/16 to