These are not the flying monkeys from “Wizard of Oz” and it is not King Louis from jungle book  with wings, but Daemons From Hell! (dramatic music playing) If you want to see what kind of hell our painters were imaginating when they worked on this mini, read on…

My palette of colors changed during the painting process, as I started with the idea of an orang-utang, but then I had the inspiration of an icy hell… 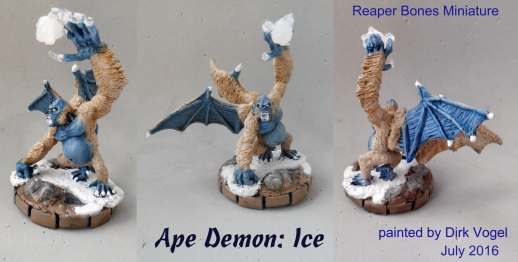 … and so I went more into the blue. I also used our unpatented Vogelglow effekt (see our previous article) to add an ice ball in the daemons hand.

Antonia’s mini is as different to mine as (literally) fire to ice.

She gave her ape a red fur and her well-known lava base, as this daemon comes from a classical firy pit of hell. She again used silver for the claws and teeth, her signature for daemons.

Antonia just offered an instruction how to make lava bases. Do you want to see such an article here? Then let us know in the comments.

He used realistic colors for his daemon. It could easily be used as a daemon or a hybrid-monster out of the laboritory of a mad scientist or wizard.

I like the paint job, he managed to get different shades of grey/black into the mini: warmer shades for the skin and colder for the fur. Did you start with pure black base color?

So again we have very different looks from the same base mini. I hope there is some inspiration for you to paint your own daemon. Next time we will meet the might of the undead.

Want to participate in next week’s post? Email the pictures of your minis until 07/24/16 to