A hooded figure moves silently through the streets, scurrying from shadow to shadow. It didn’t want to be seen pursuing his dubious business. But we shed light on this resident of the gloomy corners in town, to see what our painters worked wonders in the dark…

I liked this mini because of its posture and all the equipment on his belt and shoulder strap. You immediately get the impression of a stealthy thief (or worse), working at night following a sinsiter plot. As I cleaned the mini I recognized a round bulb under his left arm, so I checked the reaper page for its and the tin-original’s photos and couldn’t find anything. So perhaps it was a casting flaw, I thought about how to work with it and had an idea at once. Let’s see what the others made of it… 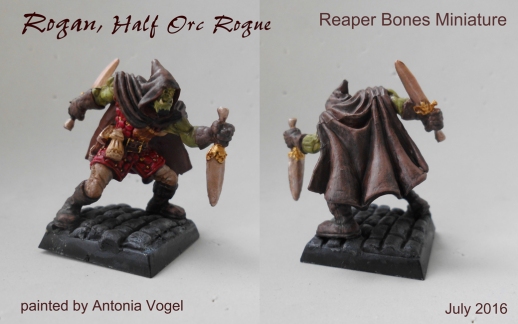 She used mainly brown colors for an unremarkable appearance, but the mini is dominated by a classical green/red contrast, colors which work well together. She liked the rivets on the padded cloth and painted them gold, like the knive hafts, which shows that he had made quite a fortune. The bulb under the arm was painted as a second purse, adding to his wealth (and his cleverness, as the gold coins are surely carried safely there …)

I wanted to create a dark figure working in the shadow with unremarkable colors without going for black alone.

I used browns and greys, matching the cloak with the paving, as this man doesn’t want to be seen. But I wanted to add some color accent, so I painted the bulb under his arm as a vial filled with poison, turning this rogue into an assassin! So I coated one of his knives with the same poison/color. I like the end result, especially the patchwork trousers and the padded armor.

Arjen did a rush job as he said for himself and was sad that he couldn’t finish the base, but managed to get the photo in time. So it’s a kind of work-in-progress.

Arjen also used an overall inconspicuous look, but went into the reddish with the purple inner cloak and trousers, the reddish brown skin and the rusty brown cloak. So you have different colors, they harmonise well. I particularly like the different colors on the inner and outer cloak – perhaps a “turn-coat”, giving him the opportunity to shake off pursuers by changing color? As I noticed Arjen painted the bulb under the arm in brown, also a hidden purse?

Again the resulting minis are highly divers, showing that you can make many different things with the same miniature. Together with the individual painting styles you get nearly boundless possibilities. Great work everyone!

Here’s the gallery for today:

Want to participate in next week’s post? Email the pictures of your minis until 07/10/16 to