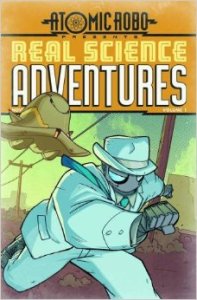 Not long ago, I posted a general-ish review of one of my now favorite indy titles, Atomic Robo.  Thinking that I had gotten my mitts on all the trades available, and pining for new material featuring my favorite, well, atomic-powered robot, I was delighted to discover that I was mistaken.  Pristine on the shelves of my local comic seller were not one, but two volumes of Atomic Robo Presents: Real Science Adventures.  How do these collections compare to the original?  Peek below the fold to find out.
Real Science Adventures is Atomic Robo’s answer to Hellboy’s BPRD series.  Each issue is an anthology of adventure set in Robo’s world, though not necessarily staring Robo himself, making a trade volume a whirlwind tour through the different periods and colorful characters that comprise Robo’s past and present.
While the tales are penned by Brian Clevinger, Robo’s creator and the genius behind 8-Bit Theater, they are rendered by a parade of talented artists.  While I am a huge fan of Scott Wegner, Clevinger’s usual pencil wielding collaborator on things atomic and robotic, I’m always delighted when other artists bring their own sense of panache to familiar worlds.  And generally speaking, the panache is brought.
But what about the stories?  In my experience, anthologies are often weakest in the story department, while the varied art takes center stage.  And its true, some of the stories in both volumes are more mirthful or camp than substantive, but it’s hardly the rule.  High points include Robo’s mid-seventies training sessions with the inimitable Bruce Lee, and Nikola Tesla’s turn of the century romps with his own band of adventurers, the Centurions of Science.  I mean who doesn’t want to see sharpshooter Annie Oakley, a Taoist monk, and the real wizard of Menlo team up against a triumvirate of unscrupulous industrialists?
Also airships.  Who doesn’t adore a good airship?
All told, Real Science Adventures pack a wallop.  Not quite as solidly as the real deal Atomic Robo, but it’s these kinds of books that add further richness to an already rich world.  If you’ve enjoyed your romps with Robo, you’d be remiss not to try Real Science Adventures.