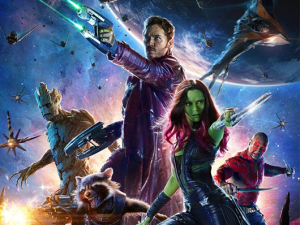 I was fortunate to see a preview screening of Marvel’s Guardians of the Galaxy early this week. If you dread even the vaguest hint of an inkling of anything that could even be construed as something akin to a spoiler, then I leave you with this TL,DR: Guardians of the Galaxy is an incredibly imaginative, raucously fun flick. It’s totally worth a few hours of toil in the salt mines to pay for your ticket, and it’ll be a shame if you don’t see it ASAP. For the rest of my spoiler-free review, peek below the fold.

Let’s run down the list. Amazingly detailed physical sets integrated into flawless digital landscapes? Check one for Guardians. Seamless interactions between human and digital actors–interactions replete with real emotional gravitas? Guardians has got that too. Guardians even has a bit of that rare bottled lightning: that joyous je ne sais quoi that has the potential to make moviegoers both young and old marvel at the wonder of it all.

In short, Guardians is an engrossing, visceral experience that feels like real life… in space… with cyborg raccoons and stuff.

That said, Director James Gunn’s Guardians are decidedly not the Guardians of the comics. One might say that the film is loosely inspired by the Abnett and Lanning run that started with the culmination of Marvel’s 2006 Annihilation event, but that inspiration is most evident in the movie’s locales and Easter eggs (keep an eye out for Cosmo!), rather than in the Guardians themselves. Indeed, Gunn and his cast made the characters very much their own–Gunn first in his script, with the addition of somewhat modified origin stories and motivations, and then the actors, who all brought their A-games (especially Bautista. Talk about a pleasant surprise.)

Despite being a Marvel film, it’s pretty hard to call Guardians a “superhero” movie. In truth, the best descriptor for it is “space opera” or “science fantasy,” and it sits in hallowed company with true classics like A New Hope and cult classics like Flash Gordon. Space opera is a genre that is often guilty of gilding the lily when it comes developing story, with complicated world building, complicated webs of intrigue involving characters with less than three minutes of screen time, and MacGuffins that aren’t fully realized or explained until the third act. Certainly, Guardians is burdened by all of these things–but every time I thought the film was about to fumble the story, not only would it throw a Hail Mary pass, but catch it in the end zone, and do the Ickey Shuffle just for laughs. It really is a nearly pitch perfect film, and a great capstone to the summer movie season.

That said, if there is one clear shortcoming in this film, it’s that there is a LOT of information disseminated  throughout. I mean, like, a lot. For Marvel aficionados, it’s a candy store, but that candy might be just a little too rich for the uninitiated. Of course, this is the first Marvel movie beside Thor 2 with its, “Screw it, we’ll have Space Elves!” attitude that has had the exuberance to say, “bee tee dubs, this flick is based on a comic book, and comics be full of weird, yo!” If the worst that can be said of Guardians is that the universe might be just a little too rich and complex, the characters just a little too plentiful (and awesome. Especially Glenn Close and John C. Reilly’s Novas), then we’re very lucky moviegoers indeed. And if the gleeful nerdiness is just too much for some audiences, the playful soundtrack and consistent funnies will keep the stiffs amused while the true geeks revel in the obtuse complexity, hidden nuggets, and emergent possibilities abounding through out.

Marvel’s Guardians of the Galaxy hits theaters on August 1st.  Watch it.

One thought on “Comic Book Movie Review: Guardians of the Galaxy”