Now that the hydra has finished decimating our free time, this week we return to our normal practice of a smaller miniature every week. This week is Janan, the dragon slayer. Though the range of colors is not as much as it might typically be some weeks, the level of detail is really staggering. Take a look.

Darklands – Mierce Miniatures launches their third project on Kickstarter, further extending their line. They have some lovely sculpts, but are using Kickstart as an online store rather than to raise money on something speculative enough to warrant crowd funding in my opinion.

Blue was a common color this week. I chose to go with it as a contrast for a red dragon’s head. The head is the piece of this week’s efforts I was particularly proud of. As to the rest of the model, it turns out that the upside of muddled casting is that you can ignore most of the mold lines and turn this warrior into a dragon slayer in a chainmail bikini.

Magnus went with a golden knight by way of contrast, though again gold was a common color this week. Magnus, your picture has deeper colors than past weeks: did you alter your lighting set up? 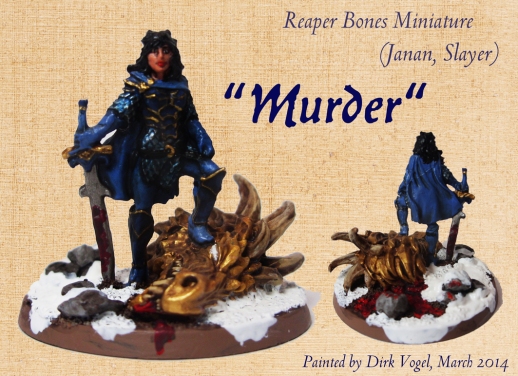 The Vogel’s were really out to wow us this week. Dirk painted Kitiara of dragon lance fame. It only stands to reason she would slay a gold dragon. I love the details on this particular rendition, there are almost too many to list. The snow, the blood, the glowing eyes of the dragon, and the high lights on the scale mail – all of them are fantastic. Dirk: how many hours would you say you invested in this truly exquisite mini? 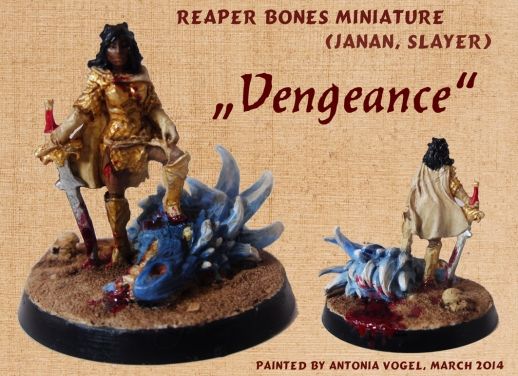 Not to be out done, Antonia matches her husbands blue and gold color scheme with her gold and blue color scheme. I love all the little details she adds every week. Not only does blood spatter her armor, but there is a nasty looking wound that has been carved into her right leg. Let me ask you the same question: how long did this beauty take you?

This weeks efforts were outstanding, and I already have a submission for next week. Thank you all so much for participating. I will never get these bones painted without the motivation your company provides.

Malek, Necropolis Mage Send pictures to caffeineforge@gmail.com by 4/6/14 at 9pm.