AMC and Vertigo to Team-Up for Preacher 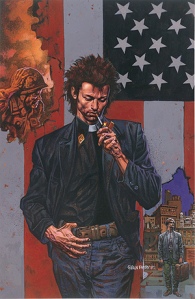 In a bid that will no doubt ensure that DC continues to curb stomp Marvel on the small screen (until Netflix launches its original Marvel content, at least), The Hollywood Reporter is reporting that a deal has been struck to turn Garth Ennis’ Preacher into an AMC series.

If you’re unfamiliar with Preacher, it tells the story of a small town Texas holy man named Jesse Custer, who is possessed by an enigmatic entity called the Genesis.  Comprised of pure good and pure evil in equal measure, the Genesis makes Jesse one of the most powerful beings in the universe, and he sets out on a mission to find God, who’s gone missing from Heaven since the Genesis appeared on the scene.  In his company are a gunslinging ex-girlfriend and a hard-drinking Irish vampire.  And he occasionally gets advice from the ghost of John Wayne… So yeah, definitely AMC material.

Now, to be fair, I’m not the biggest fan of Preacher.  I’ve probably gotten through the first twenty or so issues, and while I didn’t dislike it, I wasn’t exactly compelled to keep on reading (that said, I’ll probably pick it up again after this news).  That is to say, it’s no Hellblazer… but that’s a matter of personal preference.  Still, its nice to see the gritty, adult side of the comics world making in roads on TV (and no doubt, AMC is hoping to bank on their built in Walking Dead audience to make Preacher a success).  And Seth Rogen and Evan Goldberg are involved to some degree, so take that as whatever kind of omen suits you.

Of course, between Arrow and Preacher, DC will continue to dominate on television.  With Agents of SHIELD being just so… bad (and also suffering from a litany of network related problems, like multi-week waits between new episodes–that shit really kills flow and enthusiasm), it really will fall to Netflix to make something of Marvel’s small screen prospects.  Of course, I’m not counting on SHIELD even being a player by the time Preacher airs (I’d guess Fall of 2015 at the earliest), unless Disney decides to use it as a loss leader to keep “Marvel” in people’s faces between Guardians of the Galaxy and The Avengers 2.  That said, I’m not sure that Coulson and the Flying Short Bus Brigade engender enough good will to count for that purpose.

What is nice is seeing DC stepping up its game on the multimedia front.  After the post-Keaton/pre-Bale Batman films, we’ve been gifted with the Dark Knight trilogy and Man of Steel (not to mention The Watchmen and V for Vendetta, both of which actually managed to surpass the original works in terms of coherence, in my opinion).  In fact, with so many great movies in recent years, its kind of a wonder that DC isn’t getting as much credit for their cinematic entries as Marvel.  Of course, that has a lot to do with people’s perceptions of Marvel’s world building: Marvel is bringing their entire universe to life with each film playing into the next, while DC has thus far made essentially standalone films (TDK trilogy not withstanding).  DC has announced plans to change that with the forthcoming Batman vs. Superman film and rumored JLA project, but lets be honest: until we get the goods Bats vs. Supes is a pile-up waiting to happen.  Still it’s hard not to be at least a little optimistic, because damn, Man of Steel was good…

I wouldn’t want to sully that optimism by mentioning anything so potentially terribad as The Sandman movie, would I?  Whoops!  Damnit!

Tags: Batman vs. Superman, Preacher, The Sandman Movie
This entry was posted by Chris Avery.

5 thoughts on “AMC and Vertigo to Team-Up for Preacher”