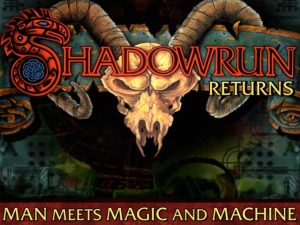 Hi folks!  Today we have a treat.  Reader and friend of Caffeineforge, Eric R., has written a review of one of the mostly highly anticipated video game Kickstarters to date, Shadowrun Returns.  Without further ado, here’s the review!

[This is a review of Shadowrun Returns and specifically the ‘Dead Man’s Switch’ campaign packaged with it. The final verdict doesn’t factor in it’s modding capability.]

Perhaps a (surprise?) summer hit, Shadowrun Returns has been on Steam’s top bestsellers list and hovering in it’s most played this past week. Pretty impressive for what is basically a tablet game.

This follows it being a smash Kickstarter hit to the tune of 1.8 million, sucking the air out of the room with the next Shadowrun Kickstarter [ed note: in the “Year of Shadowrun“] “only” getting 558k.

The game’s title isn’t just whistling Dixie. Just about every Shadowrun trope that I’m aware of makes an appearance, cameo, or at the very least, gets a reference in this game. But I was never hardcore about the setting lore, so take that with a grain of salt. Still, I knew enough to grin stupidly at some of the cameos. The play through feels very canon, I’ll give it that.

However it also feels very linear, though you can tell some stuff is going on under the hood. If it had any deviant paths, and I suspect there might have been some dialogue ones, I couldn’t say short of a second play through. But that’s fine, once you except you’re playing what is effectively a Shadowrun book with interactive fight scenes, you can quickly get into the groove. And because the engine isn’t the most robust thing, it leans strongly on it’s writing to engage you. And it does spin quite a yarn, even if some of the threads are dubiously attached.

The game has it’s flaws however. The first, and most outstanding, is the atrocious save system. Truly god awful. You see, there is no save system. Your choices are only ever locked in between map transitions. These transitions are supposed to represent about 15 minutes of play, but all it takes is a single death to understand just how bullshit that is. So I played an elven mage, and I did die a couple times early on when I was a wet paper towel doing less damage than a pistol. But by the second act I had become Death, Destroyer of Worlds, and that save issue wasn’t, anymore. Not sure how the other playstyles will fare. And one of those deaths was entirely my fault, as I decided to try my hand at summoning spirits while I had no backup in the middle of a fight.

The rest of it’s flaws were more annoyances. If you pick up Charisma you gain Etiquettes that affect conversation, but sadly most of them are rarely, if ever used in the main game for anything but some extra nuyen.

There was some sound issues that they posted a quick fix for but I didn’t bother with.

And so for the other character builds, I experienced them through the hiring of other runners. These NPCs were rarely built to be as strong as the PC could potentially get so I can’t say for certain how any of you would do while playing them.

Deckers don’t seem especially useful absent the Matrix runs. And while you might say, ‘well duh,’ unless the story insisted you have a decker (which it would supply you with), including one in your party would usually only benefit you with some more nuyen between missions. And since you have a limited number of ‘runner slots I’m not entirely sure they were worth bringing along to have in a firefight.

Adepts seemed powerful mid-game, but I started favoring Samurai by late. Riggers were neat but a pain in the ass. I’m not sure the drones were powerful enough to warrant the micromanagement but there was plenty of vents intended for their use that I never took advantage of. Having a good Shaman was a must until I could slot their more useful spells for myself. And as far as I’m aware, there was no NPC Shaman that had the Haste spell at rank 4, which is probably the best in the game in my humble opinion.

As far as the UI goes, it is serviceable. I would have liked a slightly larger font and for them to centralize the dialogue screen, I wouldn’t be surprised to have gotten a neck kink from reading everything to the right. I also would like it to remember my preferred zoom distance, it seemed to want to zoom all the way back out any time I dared to blink.

There is one cameo character known for his turn of phrase, even remarked by another NPC, only to have him with no speaking lines when he appears. That was a bummer.

The loot in the game was very tiered, with the obvious choice for ‘your class’ being presented when you got to the new act. Nothing to write home about. This is not a loot centric game.

Oh, and this ‘Grizzled Ghost’ that you can speak to. They’ve confused the term “meta” with breaking the fourth wall. I’m afraid I didn’t care for it, found it to be more immersion breaking then anything. Don’t get me wrong, his dialogue was cool, but I felt it better belonged as a menu easter egg.

And finally, I paid too much on Kickstarter. Not their fault, it was one of my early bids and I was excited to do it. But now I’ve been on the Kickstarter ride a few times, I can see that I should have held out as there wasn’t enough incentives to justify the value. [I went in on the $30 just-the-game tier.] This does not take away the fact that Shadowrun Returns is a good game, and worth the current asking value.

However once you accept it’s warts, it’s a fun ride. I would give it a 7.5/10, which will become an 8 when they patch some of those warts away.