A Big Win for Palladium? 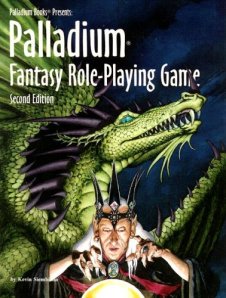 Funding closed last week on Palladium Books’ Robotech RPG Tactics, a miniature game based on the classic Harmony Gold anime and Palladium RPG of the same name (sans “Tactics,” at any rate).  All told, it was a pretty successful project, raking in over $1.4 million in it’s one month run.  By all accounts, the campaign is a coup for the Michigan-based company that has historically struggled with its finances.  So what does this portend for Palladium?

A little backgrounding:  My very first RPG purchase was a Palladium game.  Teenage Mutant Ninja Turtles and Other Strangeness, to be precise.  I remember begging my mother for it in a Honolulu bookstore while on a family vacation, some twenty-four years ago (I remember three things from that trip:  banyan trees, shaved ice the size of my head, and buying that book).  Though it would be quite some time before I could actually interpret the book (my second grade self thought it was a comic book and mom didn’t open it long enough to verify), it ultimately sparked a love affair with gaming.

For a long time, Palladium was my brand.  First, there was Heroes Unlimited (and it’s interlocutory game, Ninjas & Superspies).  Then came Palladium Fantasy, which I enjoyed quite a lot more than D&D at the time, for reasons that remain clouded in my mind.  Finally, along came RIFTS, which I gobbled up, resulting in a candy-striped bookshelf of perfect bound tomes, each stranger and more exotic than the last.  The wild imaginings of Kevin Siembieda and his cohort of freelancers were more exciting than anything comparable on the market at the time–and the price was always right, as many of Palladium’s splatbooks came in well under $20–a benefit of the less costly bindings preferred by the company.  More than comics, RIFTS was my crack.

I don’t know where the love affair ended, but at some point, I stopped buying.  There were issues with “balance” and “power-creep.”   There were what seemed like interminable delays and books turning to vapor.  There were “crises of treachery,” and other dramas that seemed to stem from the ego of the man in charge, as much as anything else.  There was also the passage of time–just as the classic World of Darkness was so quintessentially inspired by the ‘90’s, Palladium’s games seemed like a monument to the ‘80’s–which eventually grew stale to my Millennial self.  At any rate, my passion for Palladium faded, and I became enchanted with newer, “better” games.

Now, a decade after my divestment from Palladium Books, I’ve found myself SUPER nostalgic for that cool (read: “retro”) vibe.  I’d give my eyeteeth to run a game of gonzo, over the top RIFTS for a will group of victims players, time permitting. But I digress…

I haven’t talked much about the project, and frankly, I won’t.  I was late in picking up on it (as in, it was already over).  I will say that I am jealous of the backers–those sculpted Veritech fighters are about the coolest things I’ve seen on Kickstarter, and the ruleset sounds pretty cool.  One thing that really stood out to me, however, was the absence of Kevin Siembieda from the project page.  Given that he has been the heart and soul of Palladium since, well, forever, I expected to see him front and center.  No doubt the omission of his name was deliberate, but I have to wonder to what end?  Does this project represent a new business approach for the little company?  New blood?  Or is it simply downplaying the the involvement of a guy whose company has a history of financial troubles?  I honestly can’t say.

All that aside, Palladium raised a helluva lot of money for a product that looks pretty damn cool, and I have every confidence that they’ll deliver.  And at the helm is a guy who took the time to write my 12 year old self back when I hand wrote him a letter (cash enclosed) to order my dog-eared copy of After the Bomb.  Palladium and Kevin Siembieda, I wish you will.

3 thoughts on “A Big Win for Palladium?”