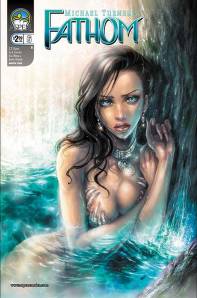 I just read them for the story. No, really!

We’ve all heard it. From people on the internet, to that loner in the comic book store… They don’t devour each monthly issue for the beautiful art, the luscious women, or the no holds barred action. They read them for the story.

That’s right – I’m talking about comic books. What were you thinking of? The other morning I was reading an excellent post over at the Delver on recent developments in Marvel, and it got me thinking. Particularly about the hit and miss nature of comic books.

(I don’t actually care for Fathom – but that cover fit my opening diatribe too well to resist.)

I do love Marvel though, and was shocked to hear that they had done a quasi reboot. Its pretty obvious I don’t read comics much these days – well, not new ones anyway. I read plenty of older issues, but unfortunately when it comes to format these days I am caught between a rock and a hard place. I don’t want to buy into the incredibly restrictive (and might I say unreasonably priced) DRM model the major publishers have developed, but I don’t want to steal content from a source I would love to be supporting.

As a consequence, I am forced to sit out, and the major story pass me by. This brings me to the major point of this post.

Serial storytelling that continues in perpetuity is bound to have bad issues. Hell, whole arcs (I’m looking at you Avengers: Galactic Storm) are liable to crash and burn. It’s just the cost of doing business; what I want to know is why is DC so much better at telling a story than Marvel?

I love Marvel. I understand that a great deal of what follows is driven purely by personal preference  but from heros and villans to villains and story arcs the Marvel universe just resonates more with me. By contrast, with the exception of a few great characters  the DC universe feels very stale to me. Whether we are looking at their track record in movies, serial cartoons, straight to DVD movies, or even just plain old comic books though, in the story department DC seems to come out ahead.

I already admitted I haven’t been reading much in the comic realm these days, so why this subject? Why now? Well, there are two reasons. First was the most recent Iron Man film; while not quite a fiasco, it was certainly a let down. Between the first film to bear the name and it’s cross over, The Avengers, it felt like Marvel had started to turn the corner, but alas it was just Lucy with her football. The second thing that really made me consider story again is Netflix.

As many of you know I have been living out of a hotel for almost 7 weeks now. Let’s just say that Netflix is really working for that monthly subscription fee. I have watched everything that even VAGUELY interests me, including most recently all million episodes of the JLA. To be honest, I was blown away. Sure, there are plenty of filler episodes, but to take characters I don’t even like all that much and weave them into epic stories of short, medium, and long lengths that weave together in unforeseen ways that have real payoff? For childrens cartoons, they really were pretty epic.

So like the rest of you I oggle the pretty pictures, but deep down I think it really is the story that makes all the difference  If either of the comic giants want to do that by clearing some deadwood, then I am all in favor of it. Not that it matters all that much – they’ll just bring them back. The only characters in comicdom that ever truly stay dead are Uncle Ben and Mr and Mrs Wayne.