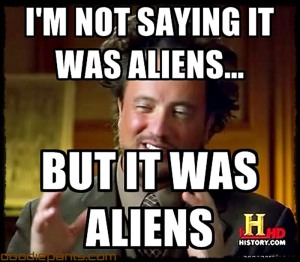 I love this guy.

As an avowed geek, I think it’s pretty safe to say that we live in interesting times.  Over the past few years, geekery and nerdosity of all stripes have gained a lot of acceptance.  And in many cases, even become kinda cool.  Consider video gaming.  Just a few years ago, it was the province of basement dwellers, late-life virgins, and bespectacled, pie-faced shut-in’s (according to popular culture, anyway).  Now, video gaming is still the province of all of the above (thank you, Big Bang Theory… thank you soooo much), but its also found acceptance in the mainstream, and is actually, you know, kinda cool.  I no longer feel even a twinge of shame or embarrassment at my love of games, comics, or sci-fi and fantasy.  How can you, when Lord of the Rings, Star Trek, and Ironman are raking in hundreds of millions in movie receipts all around the world?  Even Twilight has had a positive impact on nerd culture (never thought I’d say that), by making vampires and werewolves into something accessible to housewives and teenage girls.  When I reflect, on the castigation of nerds back in high school, I have to imagine that there is at least a little more empathy flowing now, thanks to the impact of Legolas, Jack Sparrow, and Edward Cullen on females in the 11 to 17 demo…

But even with great strides towards geek-acceptance, there are still some things I enjoy, that I don’t really care to share.   Things that make me feel just a little twinge of embarrassment.  In my mind, these are guilty pleasures.  We’ve all got them.  Peek below the fold to see me lay my guilty pleasure on the table.

I am an educated person—an archaeologist of the past and present, an anthropologist, a student of history—I’m interested in, and knowledgable about the world…

With that in mind, you’ll understand when I say that my guilty pleasure is “Ancient Aliens.”

That’s right, Ancient Aliens.  And the works of Graham Hancock—books like Fingerprints of the Gods, and Underworld, about precursor civilizations lost in antiquity.  Even Chariots of the Gods and stuff like that—really, any kind of alternative history that challenges the established narrative taught in classrooms.  Pseudo-history—raw B.S. that is distilled into pure fun, and silliness, and obtuse misrepresentation.  I love it.  Can’t get enough.

That isn’t to say that I believe in any of it—quite the contrary, in fact.  I find the idea that humankind is insufficient to the task of creating our great works, things like the Pyramids and Machu Pichu, vastly insulting.  On the contrary, I think we’re an amazing and tenacious species.  I mean if you want a peek at how gonzo we are, spend half an hour on Wikipedia reading about the peopling of the Pacific Islands.  That’s how freaking unflappable humans are.  We can build a pyramid without the help of aliens from Aldebaran, thank you very much.

What grabs me is the brain candy of it all.  The authors who live in this space are amazing at drawing connections, and taking diverse “evidence” to create amazingly rich and comprehensive narratives that, at face value, even seem to hold water.  They are amazing craftsmen.  As an author myself, it’s extremely compelling to see how the authors and contributors to these works take basic building blocks (e.g. history, fact) and through rhetorical chicanery, create persuasive alternate histories.  Not to mention, Fortean and counter-factual histories are amazing sources of inspiration for one’s own writing.  I mean, if you’re looking for the seed of a story, ten minutes with your nose in a Graham Hancock or David Icke book will give you enough seeds to spin a compelling setting and half-a-dozen compelling plots.

David and I are no strangers to this process.  The Wardenclyffe Horror was born on a handful of premises, some rooted in “reality” and some that are up for debate.  First, it’s rooted in a historical fact—that our principle characters, Nikola Tesla and Mark Twain, and a rich personal relationship.  How cool is that?  Next, we considered the ways in which the folklore surrounding Tesla has blossomed into some pretty fascinating tales (incidentally, a topic addressed by Ancient Aliens…).  Wireless power?  Death rays?   There is definitely a story in there.  And then we looked at natural history: the Tunguska event, which leveled miles of Siberian wilderness.  Was it an airbursting meteor, like the one caught on so many Russian dashboard cams last month, or was it something altogether more sinister?  Who is to say? (Although to paraphrase the popular meme above, “I’m not saying it was Tesla.  But it was Tesla.”)  All of this culminates in a story that we’re pretty proud of.  The difference being that we’re not trying to challenge the historical establishment with our story…

Anyway, I think I’ve managed to convey why I find Ancient Aliens a guilty pleasure.  And you know what, putting it out there for you guys has made me feel a bit better about my infatuation with this schlock.  So why not take the opportunity to share your guilty pleasure in the comments?  Maybe it won’t feel so guilty next time you indulge.

One thought on “Guilty Pleasures”