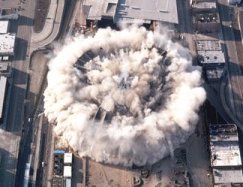 It’s not news that most successfully funded projects on Kickstarter fail to deliver on time, for a bevy of reasons.   So many projects are tied to cottage enterprises, or entrepreneurial endeavors, that a certain amount of leeway is due—novices, getting their feet under them, chasing their dreams.  And sometimes, successful projects just seem to spin off into the nether, ne’er to be seen again.  Dwimmermount is such a project.

Peek below the fold to learn about a project off the rails.

Dwimmermount: An Old School Fantasy Megadungeon is the brainchild of James Maliszewski, renown for his well-known (in some circles) old school roleplaying blog, Grognardia.  The project, funded in April of 2012 (at over 400% of their initial $10,000 target), was intended to bring to life a “megadungeon” first developed for Maliszewski’s own gaming table.  Leveraging the capacities of Autarch, LLC, whose OSRPG, “Adventurer Conqueror King,” is highly esteemed by fans of classic RPG’s, the Dwimmermount project seemed poised for success.  And then it went off the rails.

Delivery was slated for August 2012, which has long since come and gone, leaving backers seemingly in limbo.  I won’t rehash the nitty-gritty details that have surfaced in the project’s updates and comments sections (though you may find it enlightening to take a look).  What it boils down to is the IP holder ceasing communication with his professional partners, leaving them without the project funds, and forced to deal with an increasingly unhappy community of backers, without any direct means to redress their grievances.

That said, there are countless justifiable reasons why a project can be delayed, and the family crises elaborated on in the most recent updates are certainly among them.  Still, the project is six months overdue, and the escalating family dramas seem to be a relatively recent development.  So where did things go wrong?

For one, I feel that this calamity underscores a key fact that many backers overlook (whether intentionally or unintentionally): that a majority of Kickstarter projects are managed by novices, who may or may not have project management skills or a track record of professional success.  For his part, Maliszewski partnered with Autarch to see the project fulfilled, but without securing an ironclad agreement to share the IP, or mutual access to the funds to ensure fulfillment, it’s Autarch who are left holding the bag.  In fact, since the project was launched under Autarch’s name, they could be end up being far more culpable for the project’s failure than Maliszewski, in the long run.

All in all, it’s a shame.  Dwimmermount may yet see the light of day, and certainly Autarch is keeping the faith and maintaining lines of communication with their backers.   Still, even if the project meets its fulfillment goals, there are reputations on the line that have no doubt suffered some lasting damage.  I wish the Dwimmermount team all the best, and good luck in righting their ship.

3 thoughts on “A Kickstarter Implosion”