I try to stay positive in my Kickstarter message as often as possible. I really do.

Positive reinforcement of behavior is so much more effective than negative after all, and personally I much prefer to praise awesome projects than to lash out against problematic ones. Sometimes it just can’t be helped though, and I have to cross that line.

Today I want to talk about a project that was posted earlier this week both because it really annoys me, and it is a very clear example of where Kickstarter seems to be going. I am talking of course about Days of Wonder’s new Kickstarter campaign.

(Caution, angry ranting below the fold – read at your own risk.)

Days of Wonder, for those who don’t know is a maker of fine board games, the most popular of which is the critically acclaimed Ticket to Ride. This game is a personal favorite of mine, and vies only with Agricola for the number one spot on my shelf. They also make Small World, which definitely makes the top ten. I’m a big fan of their work, so it paradoxical that a Kickstarter from such a great company should vex me so.

Just take a look. I own their games, and the expansions of said games. I have purchased the digital versions. I have even purchased both Small World and Ticket to Ride as gifts for friends. I wouldn’t be shocked to find out that I have spent more than $300 on their products over the years. 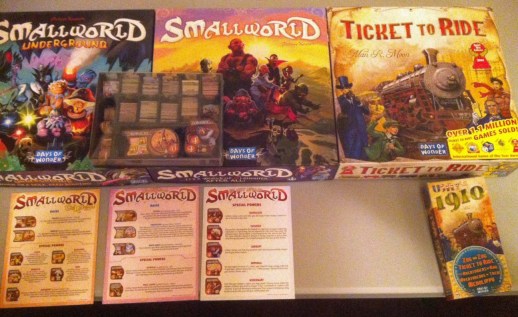 So what problem do I have with Days of Wonder making a Kickstarter to add features to a digital game I like? It’s something they were going to do anyway – quite simply, they are here just to see if they can make extra money to do it.

There are a great many problems with this project, I scarcely know where to begin. I think that this is an important point to make, as if they had screwed up a little less, I would have been content to stew quietly, rather than rail against it. Hell, if they had done a Kickstarter to make their luxury version of the game with its fancy tokens (wooden blocks and stickers) I might have even been okay with it, because to me that is something outside of their traditional business purview, and thus a totally valid Kickstarter.

So the biggest problem with Days of Wonder’s cash grab, is that they were going to do all of this anyway. They’ve made successful apps in the past – I own several. They were already planing to launch this year. Now, their major point is that they need this money in order to add more features – there is one major hole in this line of thinking though. If they were going to launch their better version of the current app this year “no matter what” but can’t include said features without this money, then aren’t they only promising to release what they have already released? You don’t want to have to charge your fans  $6 to unlock your new features, so you are sparing them that by asking for $30 for the same new features?

Seems pretty thin to me.

The kicker of course, is that this project is a terrible value. At the $15 level, you are getting $6 worth of app, and at the $30 level you are getting $12 worth of value along with three never again to be released mystery races; while this second bit is definitely a reward worthy of Kickstarter, I wonder how it will mesh with the new multiplayer features. At the $65 and $100 levels you get various pieces of swag, but those are just stepping stones to fill in the gaps till you get to the Pièce de résistance – the deluxe token sets. At $180 you get all the base tokens, at $240 you get all the extra tokens, and at $400 you get basically everything: Minis, chips, coins, and markers – the whole shebang. There’s probably a market for that product, but as I (a lover of fine board games with some disposable income) am not even a little interested, I wonder just how big it could possibly be (about 15% of their 600 backers to date are going for these high dollar pledges.)

I wonder how much of this Kickstarter is an attempt to avoid the 30% surcharge that Apple takes for the privilege of being in its app store, honestly. Normally i would say that Kickstarter’s 8-10% cut takes a healthy bite out of a company’s profits, but it this case, it could positively be considered a bargain  I have no doubt that this project will make plenty of money, and only encourage more projects like this in the future. How long will it be till Fantasy Flight or Games Workshop gets in on some Kickstarter action, because you know they weren’t going to make X anyway, and they need your help to make this happen.

This Kickstarter is just another example of big companies trying to monetize the goodwill of their fan-base. Queen’s first Kickstarter looked well intentioned enough. They wanted to see if a game a little outside of the mainstream had a market, and when it turned out it did, they decided that Kickstarter was the most profitable way to pre-sell their games. Honestly, if this Kickstarter does gangbusters, I expect a Ticket to Ride package deal with wooden trains and whatever else to be offered before the year is out. If you like something, then support it, but when it comes to voting with your dollars, the converse is also true.

Days of Wonder, you have just turned a very loyal customer into a very skeptical one.

3 thoughts on “Days of Wonder’s Kickstarter”