Kickstarter really does seem to go in streaks. For weeks the only things that catch my eye are board games or comic books. Then one day, by unspoken agreement everyone agrees to take a break from tempting projects in that vein, and move on to area of temptation. As any regular reader of this blog knows, the last couple weeks this area has been video games. Even some of the video games I am opting not to back (because no matter how great Populus was, professional designers don’t need my money) are looking really great.

This week The one hat caught my eye: Meriwether – An American Epic. Anyone who fondly remembers the only educational game worth remembering, Oregon Trail, is definitely going to need to see this. Anyone with a taste for eurogames or RPGs in general is also going to want to take a look.

Meriwether is, in the creator’s own words:

a unique blend of roleplaying, resource management, exploration, diplomacy, and survival. Though your mission is one of friendship, scientific discovery, and commerce, it will be fraught with life and death choices throughout.

You will battle the elements, hunger, thirst, exposure, mighty rivers and towering mountains over the course of your 8,000 mile round-trip voyage. Some Native Americans of the Great Plains, the Rocky Mountains, and the Pacific Northwest will see you as potential allies, while others will think of you as invaders; it’s up to you to broker peace with them. You will need to survey the land and record detailed descriptions of the plants and animals you find in your journal. As captain, you will need to maintain discipline and the respect of your men under these difficult circumstances, while keeping morale high.

In a nutshell, it is an historically faithful game, with real passion and talent behind it. From the project page I gather that the creator is not crazy about having his game compared to Oregon Trail, and I get that. Oregon trail, despite its popularity and success over the last two decades hasn’t really changed all that much. Though this game is obviously similar in a lot of ways, they have implemented some really creative and innovative changes to set it apart from other projects that have wadded into this niche. 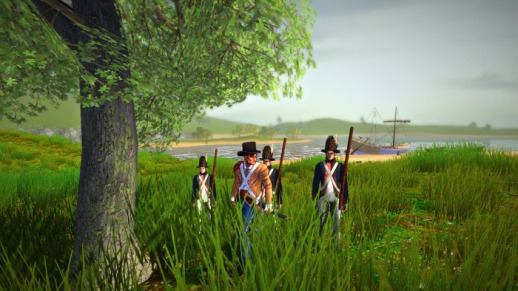 For starters, there are two game modes: Lewis and Travel. In the Lewis mode, you play a roleplaying game that is historically faithful to the journals of the expedition leader himself using a variety of novel mechanics. In travel mode, you play a proceduraly generated simulation game in which you control the expedition in a slightly more generic fashion.

There isn’t much about this project not to like, honestly. The pitch video is good, the reward levels well paced and of good value, the game play footage looks engaging, and the goals of the project seem pretty realistic. The only minor quibble I have is that in the funding section they refer to “other funding sources” but don’t go into how much the expect the entire project will cost, what the Kickstarter money will be used for, and whether this game will be completed without the project funding. This is a common enough failing in projects, and doesn’t seem to bother everyone.

I had a chance to sit down with Josh, and discuss his ambitious project:

Why Lewis and Clark?

I make games about things I’m passionate about. I’m a history buff, and I’m fascinated by exploration in general. But I really love Lewis and Clark. Years ago, I read Undaunted Courage by Stephen Ambrose years ago and fell in love with the story. Then in 2008, my wife Amanda and I followed their trail for about 3 weeks, which was an amazing trip. As a game designer, I’m constantly looking for inspiration for my work in everything I do, and it became obvious that there were so many elements of the story of the Corps of Discovery that would make for a great game.

How long have you been working on this project prior to Kickstarter? If this project had a birthday, when would that be?

The facet system seems pretty awesome; in fact I’m surprised it hasn’t been done before. How did you come up with that?

Thanks, we’re excited about it too! It came as a solution to two design issues we were trying to tackle simultaneously. The first design issue was that we wanted to make a conversation system that was directly tied to gameplay, and was more than a standard dialogue tree. The second design issue was that we wanted to give the player choice, but because of the historical constraints, we didn’t want to let player do just anything. So often, rather than choosing exactly *what* to do, you choose *how* to do it. In many RPGs your character is a tabula rasa, but we wanted to do something different, and make the player feel like Lewis, yet still have the ability to shape him. There wasn’t any single “Aha!” moment. We wrote a lot of dialogue and prototyped many mechanics before we arrived at this, and we’re still constantly improving it.

This game could certainly be considered the spiritual successor to Oregon Trail, but what other influences helped shaped it’s gameplay?

Lewis levels are influenced by RPGs, the genre hooked me as a gamer. I loved playing the Ultima and Wizardry games when I was younger. I’ve ended up making lots of different types of games but now I’m exciting to come back to my roots and make an RPG! The conversation system is heavily influenced by a more modern RPG, Mass Effect. We experimented with many different styles and settled on one that is similar to Mass Effect, especially the fact that when you choose what Lewis says, you choose a short paraphrased version of the line, and then he says the actual line. We did this for a couple reasons: it makes you feel like you are guiding Lewis, not that you ARE Lewis. And it allows us to convey meaning and context in a more modern tone that will be more easily understood by the player, while allowing his actual lines to carry more flavor of the time and setting.
Travel levels are heavily influenced by the games I like to play today: Roguelikes and euro-style boardgames. It also draws inspiration from a great game called Oasis by Mind Control Software.

How likely is that Grizzly bear to kill me?

It depends on how fast you can run! The actual Corps of Discovery underestimated how fierce grizzlies were. One shot was rarely enough to stop them, and the weapons of the time took a very long time to reload. They quickly learned that it was dangerous to go alone. The actual expedition was very lucky that only one member of their party died, and that was from a burst appendix. But you’ll have to work hard to be so fortunate!

3 thoughts on “I’m a Backer: Meriwether – An American Epic”