It finally happened. Kickstarter finally became more than a place where I would send my disposable income to die.

On Friday I got my first physical reward from a project. Up to this point, I have received several digital rewards from projects I have backed, by my sweet sweet swag had yet to cross the line into the real world. At last count I have received three digital novels, four digital comic books, and one video game. Each of these projects was very easy on the pocket book, and as on the whole, very fulfilling. They were still intangible though.

That all changes today, thanks to Fangamer’s Retroware.

This was the 15th project I backed, and I’ll admit I wavered on it several times. In the con column were two important facts: this project was created by people that were already making tee shirts and they were selling them on Kickstarter at prices that were nearly identical to what you could buy them on their website for. In the pro-backing column though, they had a great campaign, a wonderful video, a good product, and a very sincere desire to take their company to the next level. I remained conflicted until they released the design for this shirt, which was by far my favorite of the campaign.

I do love me some Zelda. 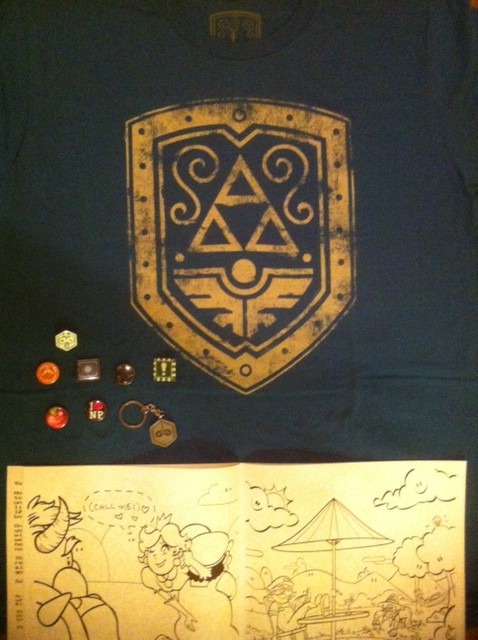 This picture shows the shirt, and it’s accompanying swag. The shirt is of high quality and fits great. I will almost certainly order more geeky apparel from them in the future. The extras are also nice, though not the reason I ordered the product.

Here you can see a close up of said extras. Most of the pins came in the pin set, but the little boomerang one (my favorite) came with the shirt itself – very clever of them. 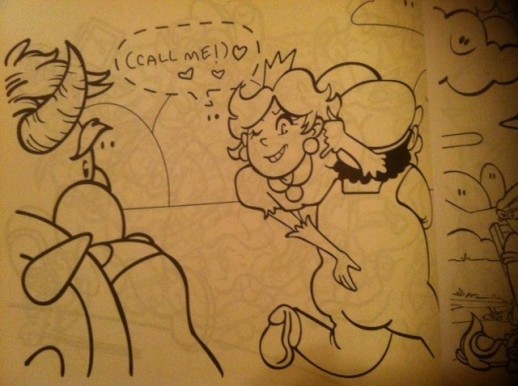 The fine folks over at Fangamer’s Retrowear also included a coloring book (a stretch goal as I recall.) They did a really great job with it, making it both geeky and fun to flip through, though I can’t imagine I what I will do with it, myself. I not really a coloring book sort of guy these days.

Overall, I am thoroughly satisfied with backing this project. The creator originally scheduled fulfillment of my reward level for November, and though he missed that by a week, I think that having your Kickstarter exceed beyond your wildest expectations is as good an excuse as any for a one week delay. This project brings the fulfillment count to six, with 55 left to send me my rewards (and 6 more that failed to fund). I don’t plan updating you guys every single time I get a reward, but I thought the first physical reward deserved a little viability.

Anyone else get cool Kickstarter swag recently? Send us pictures!