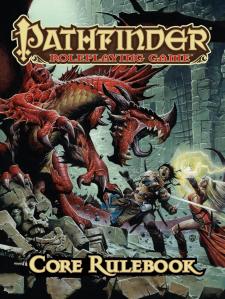 This game makes Dungeons and Dragons look like Tunnels and Trolls..

I’m a big fan of the Pathfinder RPG.  I’m a supporter of Paizo Publishing (with my hard-earned dollars and my preciously limited gaming time), and I truly admire how they leveraged the d20 SRD to make a game that is light-years ahead of their competition (Trials and Termagants 9th edition, right?).  I’ve even backed projects that leverage the Pathfinder SRD on Kickstarter.  I’m also an online gamer who has played his shares of MMORPG titles.  So imagine my surprise and delight when I caught wind of a Pathfinder MMO on Kickstarter!

I was poised to back it.  And then I started having second thoughts.  Peek below the fold to find out why.

When I say that I was poised to back Pathfinder Online, I’m actually referring to this summer’s Kickstarter campaign, launched by Goblinworks Inc., to fund a tech demo for the game.  After some consideration, I decided to decline.  First of all, it sounded like a long shot—I mean, a major MMO takes a lot of scratch, and crowdfunding the tech demo didn’t sound like a strong start.  I thought the rewards were a little lackluster too (believe me, there is no shortage of official or unofficial Pathfinder modules, and I wasn’t particularly excited by their attached polemic on video game design).

I suppose it just seemed a little off, asking backers to fund a tool that would be leveraged to garner more funding.  In the end, I declined to give them my support—but I may have been alone in that, since they ultimately raised 600% of their $50k goal.  I resolved to keep my eyes on the game’s development—after all, Ryan Dancey is no stranger to sandbox games, and if they delivered an experience the blends the best of EVE Online with Neverwinter Nights, I could hardly complain.

But then they came back to the crowd.

Last week, Goblinworks Inc. launched a Kickstarter to raise a million dollars in additional funding for Pathfinder Online.  I didn’t think too much of it at first but as I looked over the project I my doubts began to multiply.

First, it seems a bit like double dipping to come back to the crowd for a cash infusion after having so recently asked it for money to fuel what is essentially the same enterprise.  Secondly, it’s the sums involved.  I mean, a million bucks is lot to ask for, but it’s a drop in the bucket of even a modest MMO’s budget.  Consider how much talent a million bucks can really buy, and you start to understand why mega-blockbuster games are reaching Michael Bay level budgets.  And then there are the time frames involved.  Beta in 2014?  Release in 2016?  That’s a long commitment to ask of your supporters—but they’re cognizant of that, if their “Risks and Challenges” can be taken at face value.

Honestly, I’m torn.  Not every game needs a mega budget, to be sure, but MMO’s are perhaps an exception to that rule.  I mean, the systems, the art assets, the sheer size that players expect nowadays… You can’t half-ass an MMO and expect people to stick around after that first month expires (looking you square in the face, SWTOR.  Yeah, I went there).  I don’t mean to imply that Goblinworks plans to half-ass anything.  On the contrary, they have quite a lot talent in their corner that I trust to build a quality project.  But from where I’m standing this Kickstarter looks like an attempt to build buzz more than making their game a success.  If that’s the case, then I think they’ve jumped the gun by coming back to the well so soon.  Even with the participatory design approach they’re promising, I feel like they should’ve come to the party with more than the tech-demo that the community already funded.  Doing the same thing six months or a year into development—now that’s a different story…

All that said I strongly suspect they’ll get their funding.  And it’s actually pretty likely that they’ll end up with some of my money on the deal as well (I’m an MMO dilettante, a Pathfinder aficionado, and I like spending money, so…). What I can say, as a representative of the game’s target audience, is that what I’ve seen has left me frankly skeptical.  But I cleave to two hopes. First, that they succeed in making a game that I’ll want to play (so that I may play it), and second, that if they don’t, that it doesn’t irrevocably injure a brand I love and a company I respect.

At the moment, I have well over a month to mull on my decision whether or not to support them, so I’ll be keeping my eye on the update page and weigh my options.  I will say this—even with the double dipping, it’ll be tough for me to pass this one up.  If not now, then at launch… in 2016.