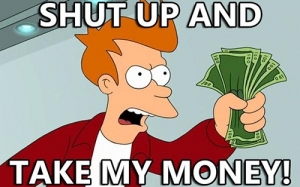 Most people would argue that there are two great things about crowdfunding: free money and cool swag. While other people giving me money, and people wanting to sell me really awesome swag are both high on my list of things that are awesome, I would like to add a third item: meeting and getting to know some of the other really great members of the community.

There’s a kind of networking where everyone is trying to sell each other things – the kind you feel the need for a shower after, and then there is the kind where you actually connect with another passionate and intelligent innovator. Though I have seen some of the former on Kickstarter, the majority of my experiences have fallen into the later camp. I’ve learned a quite a bit and gotten some great advice in fact; earlier this week one of my fellow creators turned me on to an article that mirrors some of the things I have been saying about Kickstarter’s broader effects.

Want to take a read?

Not so long ago I made a post about Queen Games; in the comments of that post it turned into a discussion about what that behavior would do to FLGS’s (friendly local game store) that sell queen products. Back in September I discussed what effects the hyper-successful Reaper campaign would have on the same. To me it seemed like a logical chain of events. Just like the overtaxed Colorado river, there are only a certain amount of dollars available for all those selling nerd friendly products. Though the occasional crossover line of merchandising (I’m looking at you Pokemon) can occasionally increase the size of the pie for everyone, in general for every dollar a gamer spends on Kickstarter, that is a dollar they will not spend somewhere else.

Gary, over at Black Diamond Games said, “There is only one reason I’m avoiding Kickstarter derived products: It doesn’t make me money.” This is a pretty fair thing for a FLGS owner to say. He went on to discuss this point in significant detail – I thought the best take away was the following:

Kickstarter projects of the small to medium tier variety, have successfully saturated their market. They simply don’t need me. Is Kickstarter the disruptive technology that will destroy my buggy whip operation? Nobody knows, honestly, but it is far more disruptive than other newer mediums. It’s still very new and evolving, and there may be a place for the game trade at the table. As a percentage of the game trade and a percentage of my sales, Kickstarter projects are negligible right now. Kickstarter tends to suck the energy out of the experimental fringe, outlier games that welike to carry where we could usually sell a couple now and then, but it has little effect on the mainstream, where the money is at, what most game stores actually sell. But I do see that pie expanding and the problems growing. We all want to get along and have a prosperous, symbiotic relationship, but I don’t see how that’s going to happen, at least not now.

Gary’s comments seem to mirror the game store owner I know personally, and I think his heart is in the right place. I personally worry that the ever-expanding wars between Wal-Mart and Amazon will someday grow to encompass the niche product that is gaming. Online-super-efficient-everything and same day shipping. If the future is all robots, how does anyone make the money to buy the good and services of said robots?