Any Kickstarter junkie would be up so early, looking through the ending soon category for one last hit swag before it is lost forever. At least that’s what I tell myself so I can sleep at night. The mega projects though, the high dollar projects that dominate the charts for their life-cycle are a special case. They capture my attention in a way that makes it difficult to see past them to the wider ecosystem sometimes. Well, for at least a little while this phenomena is coming to an end.

Soon our favorite Nostalgia title, the rebooted grand-child of Wing Commander and Free Lancer will come to the end after doing a pretty god job of blowing away its goals. It started out bravely going for crowd funding without a crowd funding site, and later opted to run a parallel campaign on Kickstarter as well; both of these sources have paid big dividends, in the neighborhood of 3.4 million and 1.8 million dollars respectively.

Let’s dig into the specifics a bit more.

The project started out promising the world, and only got more ambitious as time went on. At it’s core Star Citizen is promising EVE with more dog fighting and less spreadsheets. That’s a pretty compelling offer, for an on again off again EVE player like me.

I was also very impressed by its go it alone funding strategy, and after it decided to branch out to Kickstarter I was pretty disappointed. I’ve heard all the arguments about server strain, and they make sense, but I can’t shake the feeling that it an effort to crank up the fundraising. Which is fine, it just made me switch from thinking about the $100 reward levels to the lowest end ones.

Star Citizen has run a pretty active campaign, but it’s frequent updates feel like mostly filler to me. I am sure there are backers out there who love to know about all the different systems and ships they plan on putting in the game, but that feels like putting the cart a bit before the horse to me. When the project started they were promising to build an MMO and flight sim game for two million, but as funding they continue to pile the features on. 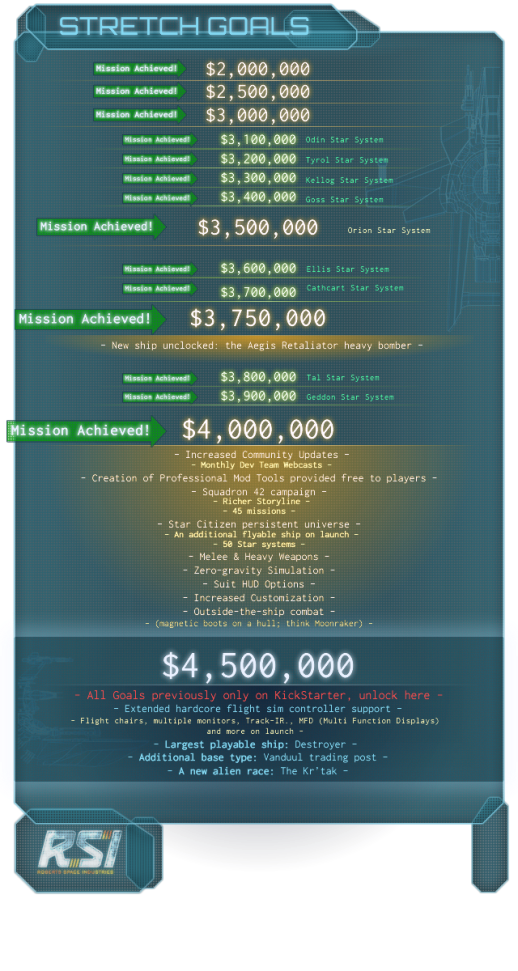 At the 4 million dollar mark we seem to have unlocked the first person shooter part of the game, and it is here that I have to ask myself if they have started to bit off a bit more than anyone can hope to chew. I mean if an experienced Dev team tells me they can make a superior product for less, and it is within their area of expertise, I am inclined to give them the benefit of the doubt, but at this point I am expecting to offer to upload your mind into their virtual universe at the 8 million dollar mark (side note – post singularity crowdfunding ill be AWESOME). I don’t have much riding on this one, so I can still manage a wait and see attitude, but if I was a high dollar backer, this trend would drive me crazy. Promising the world to so many fans seems like setting people up for disappointment.

Or maybe I’m just way off base. Thoughts?