A Tangled Web – Word of Mouth and Advertising

It’s finally over, everyone, and we have crossed the finish line at 108 percent!

What about the rest? What about the last 3%? Last night 17 backer transactions failed to clear; today that number is down to 9. I expect that number will continue to decrease over the next 13 days, but regardless – it will not impact the success of the project. Based on some early estimates  I expect that we will use all that, and a few hundred dollars more of our own money because of deviations caused by the ratio of foreign backers.

Want more details? Fortunately, we have some.

Kickstarter does not make it easy to understand much about your backers or where they come from. This is pretty counterproductive when you think about it, as this could be crucial information for future campaigns. Fortunately, I have found a few interesting trends after crunching the numbers. 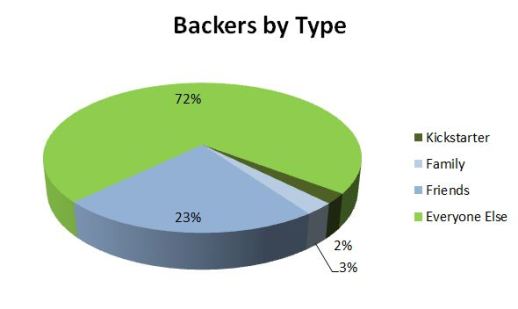 This data set had two surprises for me. First, almost three quarters of all backers were totally organic; the horrendous guilt that I felt asking my friends and family for money made me fear that organic activity would be closer to 25% some nights. I’m glad I was wrong. The second interesting point is that fully 2% of all pledges came from fellow creators and Kickstarter acquaintances I have made in the last few months, and I find this level of community to be pretty amazing.

In terms of funding sources though, I feel like I only had control over about 30% of the traffic, and fully 50% of the funding is opaque and unknowable. We spent a small amount of money on advertising for this project (less than 2% of money raised), with mixed results. The banner ad on Kicktraq paid dividends in terms of awareness, for sure – but it is hard to know whether or not the money spent on Stumbleupon moved the needle in the slightest way.

Anyone else see a trend that I have missed? I’d love an outside perspective or twelve.