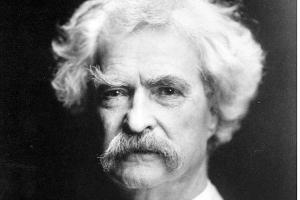 I have received more than one request from our backers to discuss more about the main character’s of our story and some of the quirks and reasons that led to their inclusion in our graphic novel, so today I will do just that. Age being before beauty we will start this series off with Mr Samuel Langhorne Clemens, who was born in 1835, and better known by the moniker of Mark Twain.

Twain is not just the narrator of The Wardenclyffe Horror, he is also one of our brave and stalwart heroes, lending his strong arm and skills gleaned in the confederate army along with those from his gold mining out west to subduing evil.

What’s that? You didn’t know he enlisted in the confederacy or mined for gold? Well then, you best read on.

I should start by saying that Twain is 73 when our story takes place, so his arm is not all that strong, and though he did lead a rough and tumble life including military service briefly, he never saw combat. We stretch history in places, but as a rule try not to rip it completely. Rather than concentrating on what he wasn’t, let’s try to concentrate on what he was.

Our writer grew up in the deep south, in the town of Hanibal, MO. This town would later go on to provide the setting of his most famous work, “The Adventures of Tom Sawyer” and it’s sequel. After his father, a lawyer and judge, died – he worked as a typesetter at his brother’s newspaper and later even as a writer. As he grew up, he moved around, working as a printer in various cities before ultimately becoming a riverboat captain and finding his infamous moniker.

Once the civil war started, he went out west to mine for gold with his brother. That didn’t pan out, so he instead became a journalist. It is at this point he might have ekked out the rest of his life in obscurity had not one of his stories, “The Celebrated jumping frog of Calaveras” gone viral. This garnered him nation wide attention, and set him on the road to being the author we all know and love today.

He went on to become a writer, public speaker, and celebrity. He earned praise and honors wherever he went, and royalties on whatever he wrote. He made and lost millions actually. By some estimates he lost up to eight million in today’s money over several years by investing in an early version of the typewriter. Twain was an early technology enthusiast, going on to write and own three patents, and it was this love of technology that drew him to Tesla. They spent a great deal of time together over the years in Tesla’s labs. It is on one of these many visits that our story begins actually.

Though his later years were plauged with financial difficculties, as I eluded to above, it is interesting to note that even after bankruptcy no longer obligated him to pay off his creditors, he went on to ensure they were each paid in full. If nothing else, and he was many other things, he was certainly a man of principle.
Mark Twain’s life was not without it’s share of  oddity’s, but the biggest and strangest no doubt, was the timing of his death. The humorist was born during a visit by Halley’s Comet, and he predicted that he would “go out with it,” saying “I came in with Halley’s Comet in 1835. It is coming again next year, and I expect to go out with it. It will be the greatest disappointment of my life if I don’t go out with Halley’s Comet. The Almighty has said, no doubt: ‘Now here are these two unaccountable freaks; they came in together, they must go out together.” He died the day after it’s return, on April 21, 1910.

Twain is remembered fondly by history and literature as being a distinct voice of wit and humor, and one of the great influences on American literature. It is for these same reasons we include him in our work, in a way that is both respectful and at once larger than life. I dare say that no fan of Mr Clemens will have a bone to pick with our treatment of the iconic figure, though I hope that you will all find out in the not too distant future.