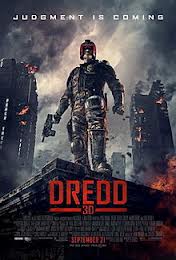 Who doesn’t like Judge Dredd?  As a character, he’s got a certain visceral magnetism that should appeal to anyone who’s had their car stereo ripped off, been mugged, or worse.  He dispenses the kind of justice that we all wish we could when we’re still smarting from a fresh crime: immediate and absolute.  Dredd is a bit like Batman: incorruptible, uncompromising, righteous–but unlike Batsy, Dredd can use the front door.  He’s got the law on his side.  Hell, he is the law.  And if you’re on the receiving end of a Street Judge’s sentencing, you can bet he’s gonna throw a helluva lot more than a book at you…

Bee-tee-dubs, movie spoilers to follow, so read with care.

I’ve always been a casual fan of Judge Dredd comics.  I confess, most of my exposure comes not through the seminal 2000 AD, but through Dredd’s various, albeit brief DC runs (I’ve recently discovered a cache of old 2000 AD’s at my local used bookseller, and with them a burgeoning love of Strontium Dog, to be discussed at a later date…).  There is something decidedly curious about a British imagining of American (Clint Eastwood-inspired) justice in a post-apocalyptic America–but whatever.  It works in its own strange way, and has since 1976.

I declare, ‘it’s about damned time someone got around to making a movie about comics most dangerous lawman.’  About damned time, indeed.  You’d think that with nearly 40 years in print, that Hollywood would’ve gotten it’s fingers up in Dredd’s pudding long ago, and made one of those awful mid-90’s adaptations.  A blockbuster reset for a leading man with a flagging career (sigh).

Putting that horror-show aside, 2012’s Dredd is a gritty shoot’em up, as violent and bloody as, well, a movie about comics’ most notorious lawman ought to be.  Set in iconic Mega-City One, the sprawling megalopolis that spans half of the Eastern seaboard, Dredd (Karl Urban) and rookie Psy-Judge Anderson (Olivia Thirlby, yum) respond to a multiple homicide call at Peach Trees, one of the massive tower blocks that dot the MC-1 skyline.  It turns out that Peach Trees is the home turf of the Ma-Ma Clan, a violent gang that is manufacturing Slo-Mo, the latest drug to ravage the sprawling ghettos.  The Clan, lead by “Ma-Ma” (Lena Headey), has taken over the tower and has set their sights on city-wide domination.  Needless to say, this doesn’t sit well with Dredd or his young charge, and things go pear shaped pretty fast.

Dredd doesn’t skimp on the action.  There is blood and bullets galore, and Slo-Mo, the film’s narco-MacGuffin, ensures that viewers get to see the bloodshed in all it’s tripped-out, slowed-down, sparkly grandeur (sparkly as in, “This is what happens if you put Edward Cullen in a blender”).  I am not squeamish, but there were a few moments where I blanched at what was on the screen, and my more sensitive viewing companions buried their heads for a few particularly audacious scenes.  That said, there is a certain four-color quality to the violence, and to the scarlet, Netflix envelope colored blood that spills by the bucket that reminds the viewer that this isn’t Saving Private Ryan, Children of Men, or Letters from Iwo Jima.  You can sit back and enjoy the ride without feeling ill for all of man’s inhumanity towards man.

Urban and Thirlby have a remarkable amount of chemistry, and it’s fun to watch Dredd and Anderson rub off on one another over the course of the film.  Thirlby’s Judge Anderson is young and idealistic, out to make a difference, while Urban’s Dredd is as deadpan and aloof as you’d expect.  I have to say though, Urban does not disappoint–he gets a lot of mileage of that chin and manages to convey quite a performance using nothing but body posture and his jawline.  The wraparound visor makes Dredd’s costume more even inscrutable than Batman, but Urban still manages to deliver on Dredd’s ironic humor, and I think, even play a little homage to that other Dredd with some particularly inspired grimacing at the start of the final act.

Dredd is the latest in a spate of cool sci-fi flicks to be filmed in the South African capital of Johannesburg (District 9 and Chronicle come immediately to mind).  Somewhat unsurprisingly, Jo-burg lends itself to being gussied up a bit for post-apocalyptia.  Honestly though, I loved the diversity and quality of the extras.  Sometimes, big budget flicks set in cosmopolitan locales leave me with the feeling that everyone in the city is straight from Central Casting (Transformers (all of them), and even my beloved The Avengers are both guilty of this), but inhabitants of Mega-City One felt genuine and totally in context.  Unfortunately, lots of them get blown the hell up.  But they do it well, damnit.

Anyway, I wouldn’t recommend Dredd for the faint of heart, but if you enjoy some splatter in your punk and a little heavy in your metal, you could do far worse with your ten bucks then see this flick.  It’s nice to see an edgier comic get a decent movie treatment (Kick-Ass is another good example.  Wanted, less so).  I’m eager to see it break $50 million, so it gets a crack at some of that sweet, sweet sequel action.  Karl Urban, as far as I’m concerned, you are forgiven for your complicity in Priest.