Every year since its inception in July of 2009, Kickstarter (previously Kickstartr) has grown by leaps and bounds. Today it is the largest and most popular of all Crowdfunding services, but it is far from the only one out there. Indiegogo recently took the blogosphere by storm during its recent Tesla museum fundraising campaign, and doubtless new services will appear and rise over time, as this is the way the internet works. Is this phenomena sustainable, though? Can this pace be maintained ?

Since I have started writing about Kickstarter extensively, the question of whether or not it is a sustainable phenomena has come up several times. Though each question asked with a slightly different perspective, the common frame is, “how much bigger can crowd funding get?” Personally, I think it depends on a wide variety of factors, which I will discuss after we better quantify the current trends.

Currently the trajectory of Kickstarter is going only one direction: up. Below is a graph from Google Trends, comparing the search traffic for three key words: Kickstarter, Indiegogo, and crowd funding. This graph is interesting for several reasons: the disparity between the three, the speed of acceleration, and the spikiness. 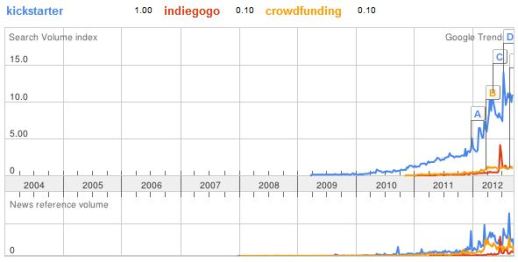 When it comes to searches, Kickstarter is head and shoulders above its peers. I believe this is because it holds its projects to higher standards, and because it has become the brand name of the concept; like Kleenex and tissues, or Xerox and copy machines, Kickstarter has become synonymous with crowd funding. It didn’t come from nowhere though. You can see the trend line was flat for over a year before the idea started to gain traction and really take off. Likewise, you can see that search volumes are very spiky – likely ebbing and flowing depending on whether there was a particularly successful project up or not. I’m sure that one of those spike corresponds with most of the top 10 projects if you take the time to match them.

But how does interest corresponds to revenue – they aren’t always comparable. Fortunately Kickstarter puts out numbers pretty regularly so we can answer that question.

According to this data, it took Kickstarter two years to reach 40 million dollars in project funding, and then in the following year or so they raised another 120 million. That is quiet the uptick. Does the rate of growth indicate that it can’t keep this pace up, or does it mean that this idea is really taking hold in the psyche of the average person? There is no definitive way to answer this but in my opinion crowd funding is here to stay. There are several factors that could slow it down or injure it. There are probably even things that could kill Kickstarter as a company, but stop crowd funding as a whole? Without legislation against it, there is not a prayer of getting this genie back in the bottle. So what could slow this Juggernaut down?

Lack of high quality products: Kickstarter doesn’t have a lot to do at this point with it’s rate of growth. It’s built the stadium, and now it just has to wait for them to come. Future dreamers with big ideas are the key to growth. I wonder if Kickstarter will start a recruitment program to convince people to create projects? Maybe they could start a reality show about Kickstarter; why Trump hasn’t already made this concept an episode in Apprentice, I don’t know.

High profile failures: The failure of anything on Kickstarter’s top ten list to deliver would put a real dent in the excitement of true believers  People entrusted a lot of money for the promise of future products to Doublefine, Wasteland 2, Pebble, and Reaper. Disappointing this core crowd of supporters would shake the foundations of Kickstarter. Though unlikely to occur, it will happen eventually – lets just hope its not one of the projects I back.

Fraud: Giving money to strangers requires a high degree of faith that they will deliver. Losing that aura, or worse – tarnishing the name of the company with an accounting scandal or anything similar would seriously impact the credibility of everyone involved, and in my opinion, make it very difficult to pry dollars out of wallets that were once wide open.

The next big thing: Every Friendster has a Myspace, and every Myspace a Facebook. Eventually someone out there will be more innovative and start to nip at your heels. Maybe they will offer their clients lower fees, or more help with advertising. Maybe they will boast higher success rates, or be more selective in which projects they accept to create an aura of exclusivity. Who’s to say? Nothing lasts forever in the digital age… except for those embarrassing pictures from when you were a teenager; those will be around a long time.