56% of all Kickstarter campaigns and between 90% and 66% (good numbers are much harder to find) of all Indiegogo projects have at least one thing in common. Despite this being a majority trait, you wouldn’t want to emulate them; these projects end in failure.  This is a sobering statistic, and as I showed you yesterday, there is no one common cause. Not all of these projects lacked quality, or advertising. Not all of them had unrealistic goals, or poor execution.
Each of them though failed to do enough right to accomplish their goals. Picking through the long list of projects on either site, you can see that many projects lacked polish or quality either in their pitch or their product, but more vexingly, many of them looked like they should have succeeded. I confess that I am sometimes puzzled when I find what looks like a very well put together project, that seemed like it has everything going for it stuck forever at 60%.

Not all of these creators take defeat lying down. Some start a new project with great alacrity. I have seen creators with up to four different failed projects under their belts, and yet they keep searching for a better mouse trap. Some creators take a little time to regroup, and re-pitch the same project several months down the road. 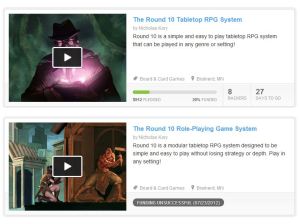 The first project I found like this was “The Round 10 Roleplaying system,” a small RPG project. . Nicholas’ written pitch changed little, if at all from the previous version. His video on the other hand was much improved; video quality, speaking quality, and actual content was all significantly better than his first attempt. Other significant changes include:  increasing his funding goal by $500, decreasing the length of his project by 5 days, adding one and five dollar tiers to his rewards, an increased the cost of banner reward: a printed copy of his game from $45 to $55 (compare to this project by RPG luminary Monte Cook for $60) – a choice that may hurt him, as the author offers no examples of art or content on his Kickstarter page. In both pitches, this project could benefit from more details.

When asked for comment, Nicholas said that he hoped “Updated rewards, this time catering to the smaller dollar amounts, as well as approaching local game businesses about pledging their support, and getting more information on the system out on the web, via forum posts and adverts,” would “combine to create the extra boost in support we need.” From what he had to say, it sounds like the increase in target was put in place to pay for advertising, and other measures to support the project. If this is the case, it might turn out to be an excellent choice.

The next project in this vein that I discovered was “Black Lotus Empire – Issue #1” a comic book project set in a futuristic dystopian China. This project seems to have learned a lot of great lessons from its first attempt: it lowered its goal from $5500 to $2500, decreased the cost of the key reward (a printed copy of his comic book from $25 to $15,) and significantly improved the overall pitch of his project. Rather than just use the original art assets from his first project, Moneyhorse also added two polished, finished pages to the mix.   Of course, in a counter intuitive move given the data we looked at yesterday, the author also doubled the project’s time window from 20 days to 40 days, which might be overkill given all the other positive changes it has made.

When asked what he was doing different this time around, Moneyhorse responded that he “set a lower goal, showed more art (that I didn’t have before), and gave more time for it to fund.” and that “Hopefully it will work out this time.” I believe the changes I enumerated above will make all the difference, and look forward to reporting back to you when this project funds.

The last thought I will leave you with, if you are interested in pursuing this topic further is a postmortem written by the author of the project “4 of a Kind,” Jack Marchetti. He does an excellent job of explain what went right and wrong with his project, and I would much rather you read what he has to say on the subject, rather than regurgitate it to you.

Are any of you running your own crowd funding projects, or about to give it a try? What, if anything, does this information make you want to do differently?

4 thoughts on “Failure: A Crucible”